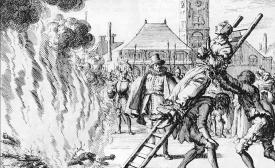 Anneken de Vlaster, an Anabaptist woman, is thrown into the fire in 1571, as pictured in Herald Press’s Martyrs Mirror. 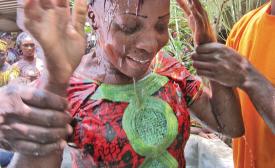 Lydie Yougbaré emerges from her baptism and into the fellowship of the Bobo Dioulasso congregation of Eglise Evangélique Mennonite du Burkina Faso. (Photo by Frank Nacanabo)

Sometimes, a single act can have enormous consequences.

Most humans really do not like conflict. We often see it as the brokenness of a relationship. Especially as the church, we desire relationship, we desire wholeness. And conflict feels like it brings separation and pain, even death.

My life is great viewing. Tonight I watched my one-year-old meticulously pick through a small box of knick-knacks looking for something she could treasure. I wanted to interrupt, but then it just turned so gosh-darn cute and I watched in satisfied silence. Ah, joy.

I’m in the thick of it. I had my second child earlier this year and life is still in the process of reordering itself. The predictable schedule went out the window and is slowly settling back into something new and, well, busy. Finding time to keep up with everyday tasks—dishes, laundry, meal prep—is difficult. Babies change everything. 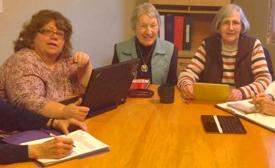 There is so much to be done. Extra demands at home and at work. More time with the family. Keeping up with an exercise program. Planning the next holiday. Time out with friends. Involvement in our children’s school and extra-curricular activities, and many more. The demands of life draw us into a myriad of activities demanding our time and energy.

A quantifiable angst hangs in the church air these days. Mennonite Church Canada is in decline. There are exceptions and bright spots, but the trend has long been unmistakable. 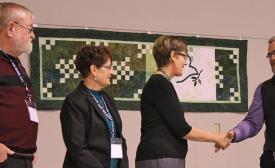 Peter Rempel, right, board chair of MC Manitoba, welcomes Pinawa Christian Fellowship into membership at the annual delegate sessions on Feb. 27 and 28, 2015. Ken and Willa Reddig and Lorna Hiebert, at left, are part of the Mennonite subset of the fellowship. In the 1960s, the government created Pinawa for workers to build and service a newly established nuclear research facility. Christians from a variety of backgrounds and traditions established homes in the community and, rather than forming many little denominational groupings, they formed one body called Pinawa Christian Fellowship in 1963 to convey a message of Christian unity. (Photo by Evelyn Rempel Petkau) 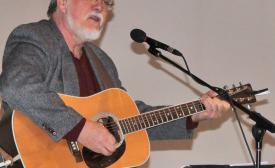 Chuck Neufeld sings to Mennonite Church Manitoba delegates: ‘If you’re on the road to where you are going, you are already there in your heart, mind and soul. It will take all your strength.’ (Photo by Evelyn Rempel Petkau)

“Be not afraid“ was an apt theme for the 2015 annual delegate gathering of Mennonite Church Manitoba. Delegates were informed of a $234,647 deficit, the withdrawal of one their fellow member congregations (Plum Coulee Bergthaler Mennonite), an unknown future for camping ministry and scaled-down ministry programs. 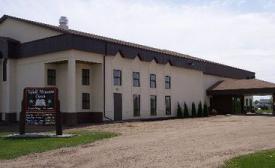 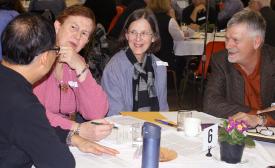 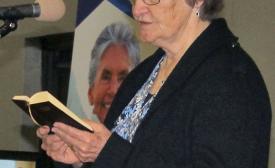 Sarah Lowen of the now-closed Clearbrook Mennonite Church gives thanks for the support of MC B.C. to the small German-speaking congregation over the years. (Photo by Amy Dueckman)

With a focus on being missional and staying vibrant, healthy and connected, delegates and friends of Mennonite Church British Columbia gathered for annual sessions at Peace Mennonite Church on Feb. 20 and 21, 2015. 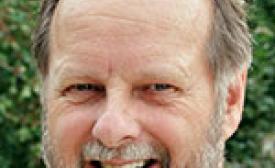 Despite risk to his reputation and livelihood as a federal lawyer, for more than a decade Edgar Schmidt has consistently spoken out against the federal government’s practice of proposing bills to Parliament without taking adequate steps to ensure that the pieces of legislation don’t violate the Bill of Rights or the Charter of Rights and Freedoms, or, if they do, that Parliament is advised of t 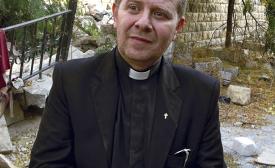 In his own words, Reverend Ibrahim Nsier, a pastor of the Arab Evangelical Presbyterian Church of Aleppo, tells about his ministry in Syria. Mennonite Central Committee, through the Fellowship of Middle East Evangelical Churches, supports the work of Nsier’s church as it addresses the urgent needs of the most vulnerable. 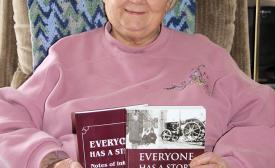 Ruth Zehr, pictured in her ‘garden home’ at the Nithview Community in New Hamburg, Ont., holds Everyone Has A Story, Vol. 2, and the companion, Notes of Interest. (Photo by Dave Rogalsky)

Ruth Zehr believes that everyone has a story worth telling.

A decade ago, Zehr overheard a conversation involving Norma Iutzi, program assistant coordinator at the Nithview Community in New Hamburg, about the many stories she heard when she visited the residents of this Tri-County Mennonite Homes multi-stage facility. 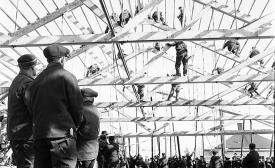 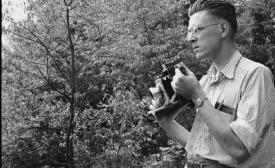 With his camera and notepad, David L. Hunsberger captured on film Mennonite life in Waterloo Region in the 1950s and ’60s. (The Mennonite Archives of Ontario) 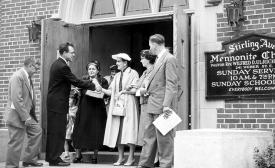 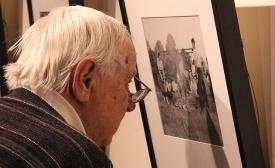 Abner Martin, founder of the Menno Singers, examines one of David L. Hunsberger’s photographs on display at Conrad Grebel University College, Waterloo, Ont., at the show’s opening on Feb. 27, 2015. (Photo by Dave Rogalsky) 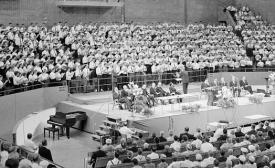 According to Paul Heidebrecht, director of Conrad Grebel University College’s MSCU Centre for Peace Advancement, “Advancing peace requires many hands. It requires shoulders to lean on, and to stand on. It is sustained by the mundane tasks that make daily life possible. Peace becomes possible when we experience genuine community.” 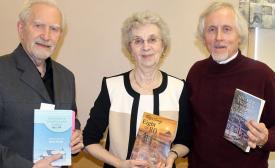 A buzz of conversation filled the Bethany Manor fellowship hall as about 150 people gathered to celebrate the launch of three new books by Saskatchewan authors.

Jake Buhler, president of the Mennonite Historical Society of Saskatchewan, which hosted the Feb. 22 event, said that “promoting the telling of stories” is something his organization needs to do. 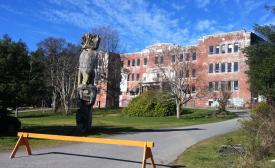 St. Michael’s Residential School was open for 50 years. It now stands empty and decrepit, serving as a dark reminder of past abuses, awaiting its final demolition. (Photo courtesy of Janna and Jon Janzen) 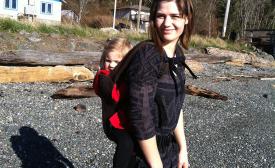 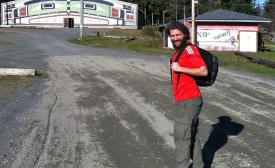 Jon and Janna Janzen stood in front of St. Michael’s Residential School in Alert Bay, B.C., in February and they say they felt darkness in its presence. 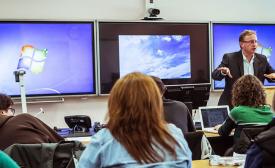 Brian Froese, CMU’s assistant professor of history, teaches a class. According to a recent Maclean’s Magazine report, students at CMU in Winnipeg are very satisfied with their education and their experience at the Christian liberal arts school. (Photo by Rachel Bergen)

According to a recent Maclean’s Magazine report, students at Canadian Mennonite University (CMU) in Winnipeg are very satisfied with their education and their experience at the Christian liberal arts school. 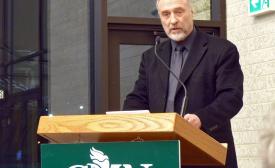 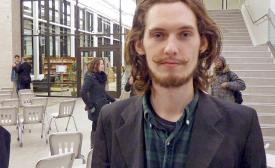 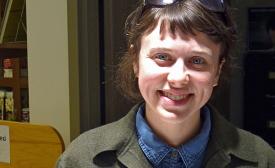 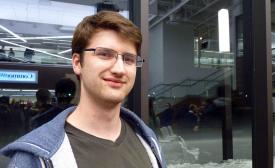 Late arrivals had to find their own chairs as students, academics and commu-nity members filled Marpeck Commons at Canadian Mennonite University (CMU) on Feb. 26 to hear Rev. Dr. David Widdicombe explain what it means to “sow the wind” by misusing Just War theory. 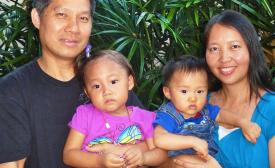 Tom Poovong’s passion for sharing the gospel was first fuelled by his mother, a woman he describes as deeply spiritual and abundantly generous.