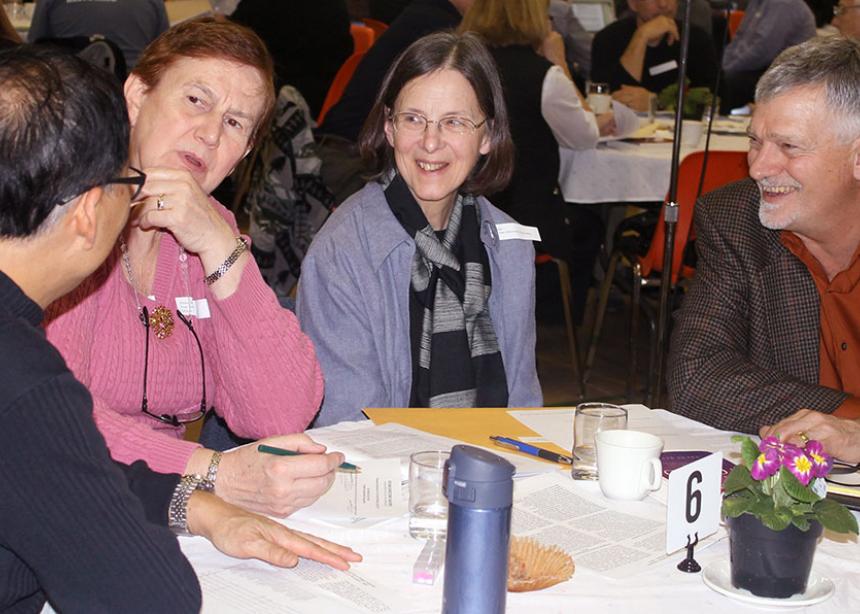 With a focus on being missional and staying vibrant, healthy and connected, delegates and friends of Mennonite Church British Columbia gathered for annual sessions at Peace Mennonite Church on Feb. 20 and 21, 2015.

The Lead sessions on Feb. 20 featured guest speaker Dan Unrau, pastor and Mennonite Central Committee consultant, speaking on “Addressing power and authority in the church: Seeing that no one gets hurt and the work gets done.”

Unrau kept the group’s attention using a storytelling approach as he explored power in the church. “Pastors and leaders have power,” he said. “We lead by permission, but too much power goes into abuse.”

He also compared the church to a family system. “The church is the unblemished bride of Christ, but a dysfunctional family,” Unrau said. He likened the church family to a mobile in which the elements are tied together and depend on balance, but when something happens to change one part of it, even a positive change, the balance for all is disrupted. “Do we want to be healthy or leave things the way they always were?” he asked.

Three plenary sessions on Feb. 21 included “Anabaptist identity” with Gareth Brandt of Columbia Bible College; “Priority of empowering people” with Dan Unrau; and viewing of the short film, How the Wolf Changed the River, which explains how the reintroduction of wolves into Yellowstone National Park caused a “trophic cascade” and positively affected the whole ecosystem of the park. Participants were asked to consider whether there is something that needs to be reintroduced into the church that would bring about drastic positive changes.

This year’s theme was “Following Jesus today.” MC B.C. moderator Lee Dyck reported on the past year’s work of the Reimagining Reference Group approved at last year’s meeting. MC B.C’s three themes in line with this are:

In afternoon business sessions, delegates formally recognized the 62 years of ministry of the recently closed Clearbrook Mennonite Church in Abbotsford and passed a resolution to authorize the Leadership Board to manage the church property, for which MC B.C. holds the title. This would include landlord responsibilities in connection with possible renters and investigating the development and sale of the property. Several ideas were suggested for use of the property, including constructing an apartment building or renting to another local church that may not have a permanent worship home.

Living Stones Mennonite Christian Church, a Chinese congregation, was recognized for its first year of ministry. The congregation numbering 25 to 30 meets at Cloverdale United Church and has an active youth group and cell groups. “People are coming to the Lord,” said Pastor Jonathan Deng. “That’s exciting. Pray for us.”

Deng also shared prayer requests with the delegate body, saying that his church needs worship leaders, discipleship training, financial support and Sunday school teachers. Would members of sister congregations be willing to commit to teaching one time a month for one year, he wondered.

The 2015 budget was approved, although the Finance Committee reported MC B.C. has been running at a deficit for the last few years. Interest from the Mountainview fund, about $50,000 per year, is being used to make up the deficit, but will eventually be depleted. 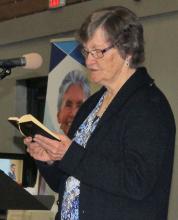 Sarah Lowen of the now-closed Clearbrook Mennonite Church gives thanks for the support of MC B.C. to the small German-speaking congregation over the years. (Photo by Amy Dueckman)