‘Promoting the telling of stories’ 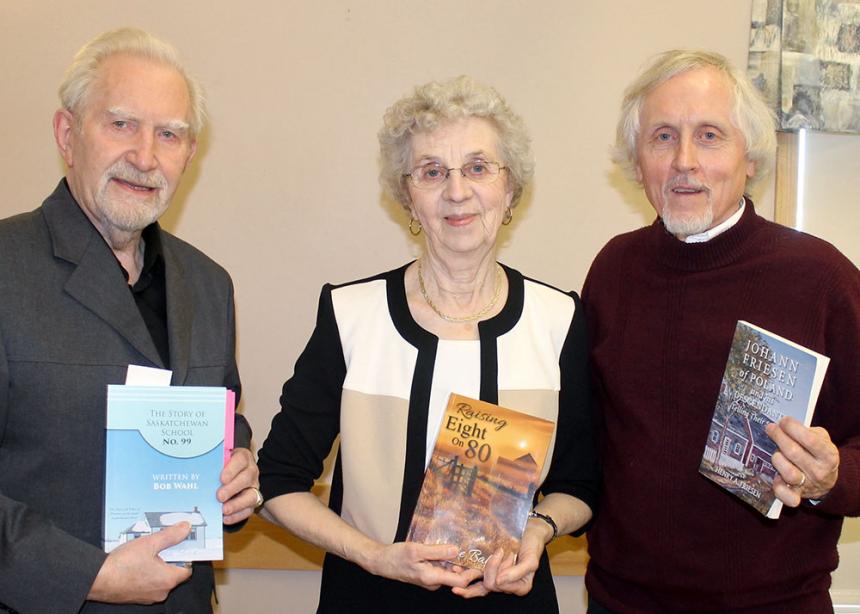 A buzz of conversation filled the Bethany Manor fellowship hall as about 150 people gathered to celebrate the launch of three new books by Saskatchewan authors.

Jake Buhler, president of the Mennonite Historical Society of Saskatchewan, which hosted the Feb. 22 event, said that “promoting the telling of stories” is something his organization needs to do.

Stories can take many forms, as evidenced by the books being introduced that day. In their own ways, they explore the impact of social change on Mennonite families and their faith communities.

Henry A. Friesen of Regina set out to learn the stories of his great-grandfather when he undertook research for Johann Friesen of Poland and his Descendants. In 2001, he travelled to Ukraine to find the village of Blumengart, from which his ancestors came. Although the village no longer exists, Friesen said, “seeing the land [where it once stood] was a deeply moving experience.”

Friesen’s great-grandfather emigrated to Canada with his family, settling first in Manitoba and later in Saskatchewan. But when government regulations challenged Mennonite autonomy in the area of education, his great-grandfather, at age 64, and after 47 years in Canada, chose to emigrate once more, this time to Mexico, where he lived until his death at age 86.

In 2006, Friesen travelled to Mexico and located his great-grandfather’s grave. Reflecting on what he learned about the man, Friesen said, “Now I feel that I know him, at least a little, and I’m sure that I would have loved him.”

The stories Bob Wahl tells in his book are those of the school he attended as a boy growing up at Clark’s Crossing, near Warman. The Story of Saskatchewan School No. 99 depicts the early non-Mennonite pioneers who first settled the area and the Old Colony Mennonites who arrived later.

Needing a school for their children, the pioneers established the Saskatchewan Protestant Public School District of the North West Territories. The name matched its geographic size of 32 sections, or 8,900 hectares, of land. Later, the name was shortened to Saskatchewan School No. 99. The numeric designation indicated it was the 99th school established in the province.

Old Colony children attended school alongside their non-Mennonite neighbours. When the law decreed that their children must be taught by government-certified teachers, Old Colony leaders elected to leave Canada for Mexico. However, most of the Clark’s Crossing Mennonites decided to stay.

A leadership vacuum resulted, with the eventual outcome being that “few children of Old Colony parents have followed in their parents’ footsteps,” said Wahl. “They either joined other evangelical churches or none at all.”

Significantly, about 20 former students of Saskatchewan School No. 99 attended the book launch.

Nettie (Friesen) Balzer’s book Raising Eight on 80 is a collection of short stories based on her family’s experiences living on a farm east of Osler. “Faith, work, music and humour shaped our lives,” said Balzer, who still resides in Osler. While her parents once owned a quarter section of land—65 hectares—they lost half of it to a government airfield when the Second World War began.

The book’s title refers to the fact that Balzer’s parents raised eight children on their remaining 80 acres.

Many of her stories are based on the works of her brother Julius Friesen, which were originally published in the Young Co-operators pages of The Western Producer.

In one of Balzer’s stories, Julius discovers a discarded white flight suit on the edge of the airfield, which he uses for trapping rabbits. He reasons that the white suit will camouflage him against the snow and the rabbits won’t see him coming. Like the rabbits her brother trapped, said Balzer, the world at that time was also “trapped in a snare of war.”

All three books are self-published, and are available for online purchase from the historical society at http://mhss.sk.ca. 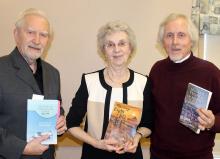