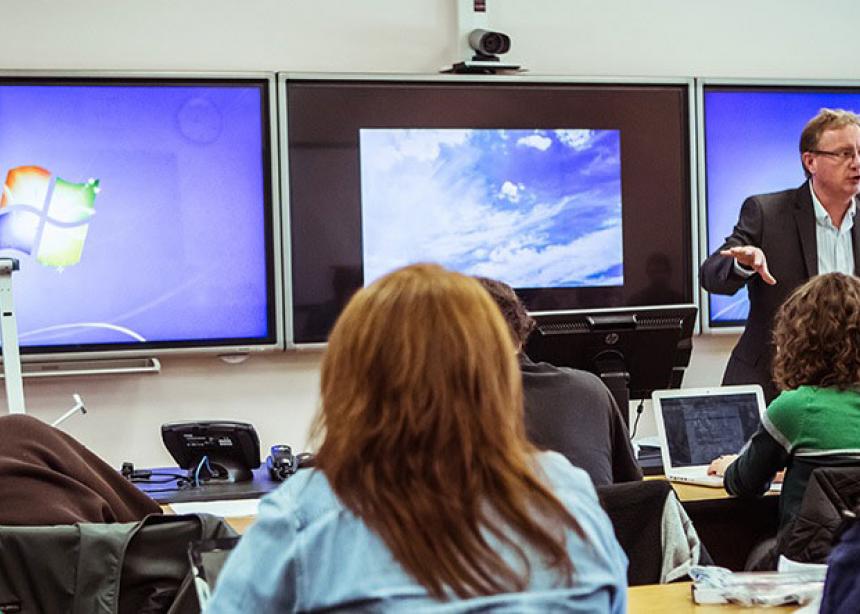 <p>Brian Froese, CMU’s assistant professor of history, teaches a class. According to a recent Maclean’s Magazine report, students at CMU in Winnipeg are very satisfied with their education and their experience at the Christian liberal arts school. (Photo by Rachel Bergen)</p>

According to a recent Maclean’s Magazine report, students at Canadian Mennonite University (CMU) in Winnipeg are very satisfied with their education and their experience at the Christian liberal arts school.

A feature published in February gave a snapshot of the 2014 Canadian University Survey Consortium’s findings. CMU placed in the top four out of 28 universities in four categories, reflecting how students feel about their professors and how comfortable they feel at the university.

Fifty-eight percent of responders from CMU said that they strongly agree with the following statement: “Generally, I am satisfied with the quality of teaching I have received.” CMU earned first place in this category.

CMU students strongly agree that most of their professors treat them as individuals, not just as numbers. Again, CMU earned the top spot in the category.

It placed second when students were presented with the statement, “Most of my professors are intellectually stimulating in their teaching,” and fourth when responding to the statement, “I feel as if I belong at this university.”

According to CMU president Cheryl Pauls, it’s encouraging to be recognized by the students. “It’s as if students are saying, ‘Thanks for the fine teaching. We learned a lot, and that’s because you took us seriously both inside and beyond the classroom. You bothered to get to know where we’re coming from,’” she says.

Abram Thiessen, 21, attends Level Ground Mennonite Church in Abbotsford, B.C. when he’s not in Winnipeg. He says he has experienced CMU’s care and concern both in and out of the classroom. It was especially evident in his first year when he had a near-death incident.

“I went into cardiac arrest as a result of an unattended heart condition that had been going on for the last year-and-a-half,” he says. “After I emerged from my induced coma after having a successful heart procedure, I was greeted by two large poster boards with dozens of CMU students’ condolences, encouragements and prayers, which I still have in my bedroom to this day.”

Thiessen says students and professors visited him in the hospital with care packages and kind words over the following weeks. Much of the school got together while he was in hospital to pray for him, as well. When he returned to school, professors accommodated his needs and gave him time to complete unfinished school assignments.

“That, to me, was a truly CMU experience,” he says.

Anna Bigland-Pritchard is in her fifth year and is about to graduate from CMU with a bachelor of music in voice performance degree. The 22-year-old is from Saskatoon and attends Osler Mennonite Church.

She says that at CMU she was able to pursue all of her passions in one place, including peacebuilding, composition, performance and theology.”

“It has been nice to not have to fit myself into a very specific box, but to rather be able to branch out into more areas that I am interested in,” she says. “It means a lot to me that CMU as an institution has the space to respect and support that.”

Bigland-Pritchard says that her professors have proven time and time again that they are invested in her education and personal life. “They have always made extra time for me to help me achieve and grow,” she says.

Even when tragedy hit her family, she says that her professors and school friends were by her side. “When my grandma passed away in second year, my professors were very understanding and supportive, even prayerful,” she says.

CMU’s president hopes that students will take away more than just lessons they learn in class or in their textbooks. “I’m persuaded our students will show a similar interest and care to others,” Pauls says. “That’s what happens with good mentoring.”

Brian Froese, CMU’s assistant professor of history, teaches a class. According to a recent Maclean’s Magazine report, students at CMU in Winnipeg are very satisfied with their education and their experience at the Christian liberal arts school. (Photo by Rachel Bergen)