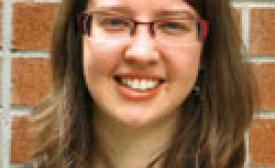 This spring’s federal election rekindled my interest in Canadian politics after I’d experienced disillusionment with the whole process. Several elections changed nothing and the candidates I voted for always seemed to lose. 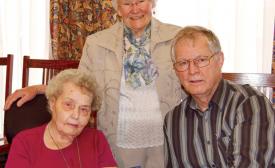 “Will the fellows like my cooking?” wondered Nettie Redekopp in 1954 as she arrived at the Pax post-World War II rebuilding project in Wedel, Germany. That question haunted her for years, but finally in 2010 she dredged up the courage and began to call those whose phone numbers she could find. 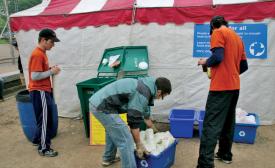 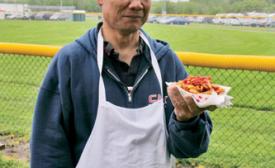 Savang Nay, a volunteer from the Grace Lao Mennonite Church, Kitchener, takes a break from making spring rolls to load up on fries and ketchup, served in a recyclable paper container. 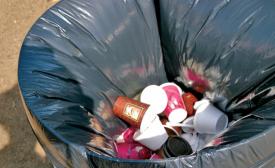 In past years, garbage bins at the New Hamburg Mennonite Relief Sale were filled with a mix of recyclables, compostables and garbage. This year, there was an effort made to sort the garbage before taking it to the landfill.

One of the stated goals of Mennonite Central Committee (MCC) is creation care, to the point of MCC Ontario hiring Darren Kropf part-time to spearhead this effort in congregations. But activities like the New Hamburg Mennonite Relief Sale, now having completed 45 years, are run by grassroots organizations and are not part of MCC proper. 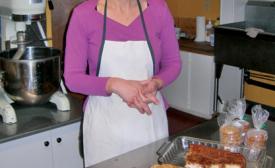 Lynette Froese displays some of her Wheat Song Bakery products that are all made from organic, locally grown grains and natural yeasts.

Lynette Froese is reluctant to call her unique career a business, or even a career. “I was raised to consider work as a form of service, so I try to see this work not just as a business, but as a way of offering a service,” she says.

Despite a small survey sample—only 215 out of more than 14,000 subscribers took the time to send back the two-page questionnaire in our Feb. 21 issue—it is clear that readers still believe Canadian Mennonite “should be a primary source of information about Mennonite Church Canada”; 89 percent agree or strongly agree with this sentiment.

“Where have you been today?” the customs officer at the Edmonton International Airport asked.

“What have you heard about Slave Lake?”

“We haven’t heard anything since we left home eight days ago.” 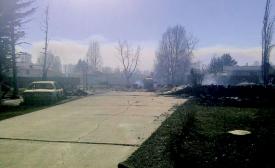 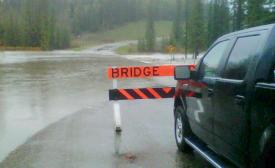 The Water Valley bridge over Little Red Deer River flooded this spring, blocking access to Camp Valaqua from the north.

In the past month, wildfires in northern Alberta devastated the community of Slave Lake, with the resulting losses coming to the attention of both Mennonite Mutual Insurance (MMI) and Mennonite Disaster Service (MDS), while in the south the swelling Little Red Deer River cut off access to Camp Valaqua from the north. 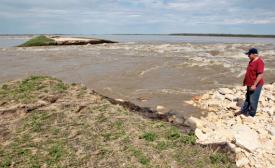 While Winnipeggers remained dry and free from the worry of flooding this spring, this is not the case for farmers living near the Portage Diversion, including Tony and Astrid Peters and their family. Up to 75 percent of the Peters’ 405-hectare potato farm is engulfed by water. 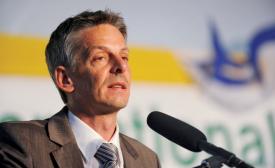 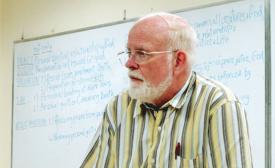 Thomas Finger, a former professor at Eastern Mennonite Seminary, Harrisonburg, Va., leads a workshop on ‘Peace: The lens for re-visioning Christian theology and mission,’ at the International Ecumenical Peace Convocation in Kingston, Jamaica.

Participants at the International Ecumenical Peace Convocation (IEPC)—held last month in Kingston, Jamaica, to celebrate the end of the Decade to Overcome Violence—released a message expressing their unified experience of a week-long exploration of a just peace and ways to navigate a path forward as they return to their homes and churches around the world. 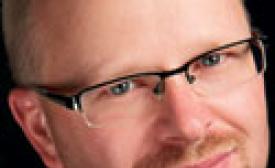 A few months ago our four-year-old daughter was overheard singing a song with only one line, which she repeated irritatingly till my patient wife didn’t know whether to laugh or cry. Our little fireball of estrogen was singing a song of her own creation ripe with ironic truth: “I’m a different sort of challenge.” Amen, little sister. 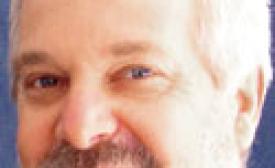 Mennonites are in a unique position in this era of mission. Arthur Boers, author and seminary professor, notes that we sit in that uncomfortable place between the mainline and the evangelical church traditions.

In search of a ‘relational’ theologian

Thank you very much for your editorial, “Habits of Repair,” May 2, page 2.

1. What has been your congregation’s experience with divorce? Does the church respond differently to divorce than it did in the 1970s? Has divorce lost its stigma? Are those who are divorced still discouraged from taking positions of leadership in the church?

When a couple divorces, lawyers help decide how jointly held possessions are divided. There are many things, however, such as church attendance, that the couple are left to negotiate on their own.