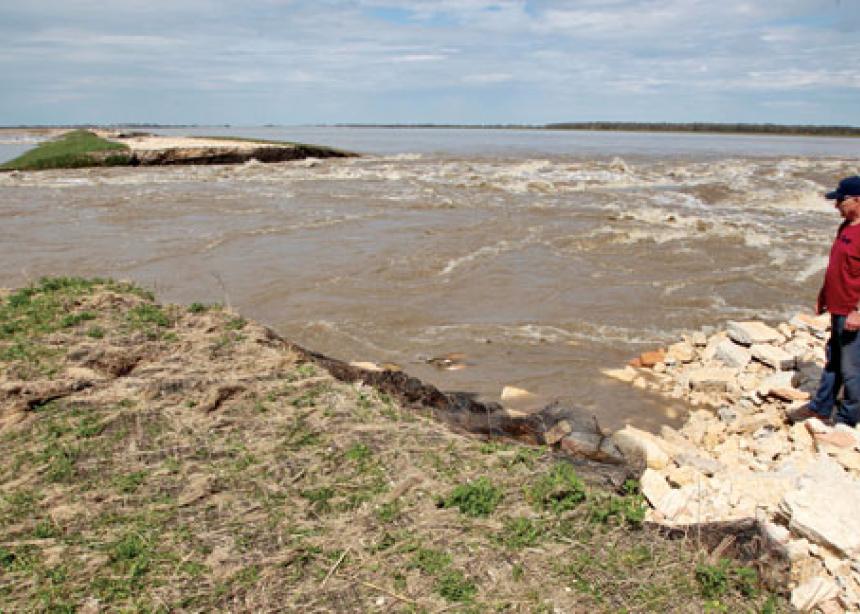 While Winnipeggers remained dry and free from the worry of flooding this spring, this is not the case for farmers living near the Portage Diversion, including Tony and Astrid Peters and their family. Up to 75 percent of the Peters’ 405-hectare potato farm is engulfed by water.

This is because the move was made, more than 40 years ago, to protect Winnipeg by building a diversion so that water would flow from the Assiniboine River to Lake Manitoba.

According to Tony Peters, a member of Portage Mennonite Church in Portage la Prairie, Man., this diversion has not done its job. “Water pours out and the water breaches the banks and floods agricultural land around Lake Manitoba,” he says. “The outlet is way too small for the amount of water that enters into the lake.”

Because of wet weather conditions this spring, the Portage la Prairie/Brandon area and other communities surrounding Lake Manitoba have experienced the “flood of the century,” Peters says. “We won’t be planting any acres on our farm this year.”

Although the family has experienced a great deal of stress from the flood, they have been helped a great deal by the local churches and their neighbours. Portage Mennonite, as well as the local Alliance church, helped sandbag. “They even brought food,” Peters says enthusiastically. “To have that kind of input to help you is a heartwarming experience.”

It isn’t just the local church that has been helping out. Mennonite Church Canada has been trying to raise awareness by sending out prayer requests to churches across Canada, says communications director Dan Dyck. Mennonite Disaster Service (MDS) has also been responding to calls for help with flooded basements and rescuing appliances that are dangerously close to encroaching water.

According to Manitoba MDS chair Dan Klassen, there isn’t a great deal of work for MDS right now, but the “local volunteers have been responding as needed,” he says. “The government has been providing a bunch of funding. After a few months we will be covering those who fell through the cracks.”

But based on the many floods he has lived through, Peters has found that the government does little to help those who are suffering. “The programs put in place are very, very long, tedious and difficult to be a part of,” he says.

He thinks this may be because those who are not directly affected by the flood do not understand the big sacrifice those affected have made so that Winnipeg can stay dry. “It feels like it isn’t [Winnipeg’s] problem at all, just our problem,” he says, adding, “That’s a hurting feeling. . . . We’re paying a big price tag to keep Winnipeg dry.”

“I think we have to learn that taking the problem away from one sector of people and giving it to someone else is really not a solution,” Peters says. “It’s just transplanting the problem.”