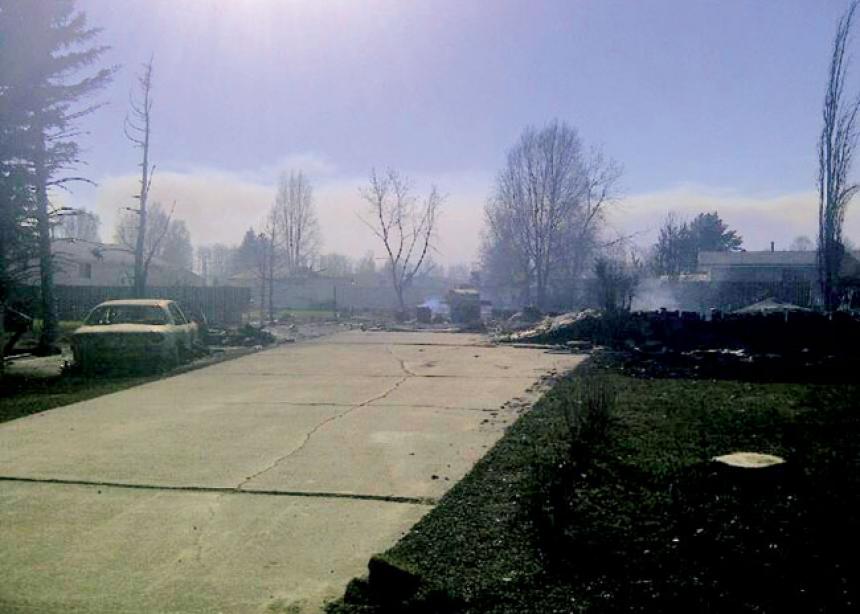 In the past month, wildfires in northern Alberta devastated the community of Slave Lake, with the resulting losses coming to the attention of both Mennonite Mutual Insurance (MMI) and Mennonite Disaster Service (MDS), while in the south the swelling Little Red Deer River cut off access to Camp Valaqua from the north.

Although Alberta’s Mennonite Mutual Insurance only has a dozen policyholders in the north, the heat from the Slave Lake fires was felt all the way to its Calgary offices. “It kind of hit home because it’s one of our staff whose parents lost their home,” said claims manager Larry Jantzi.

On May 15, wildfires ripped through Slave Lake, pushed by winds up to 100 kilometres per hour. Residents rushed to evacuate and were unable to take more than a few possessions with them. A third of the town of 7,000 was destroyed, including businesses, homes, the new town hall and library.

Lauren Dyck, an insurance representative at the La Crete MMI office, is helping Slave Lake area policyholders deal with their losses. Dyck’s parents, Abe and Rita Dyck, lost their home and all its contents to the fire.

Dyck, who grew up in La Crete and worked in the Slave Lake area before joining the staff at MMI, clearly understands his work as Christian ministry. “After the fire, I was calling [policyholders] representing MMI, but also knowing them,” Dyck said. He found policyholders thankful for the call and relieved to hear they were covered for the wildfire, evacuation expenses and other damage they may yet discover.

Dyck’s parents were not at home when the wildfires struck. A few days earlier they had left Slave Lake to manage a campground near La Crete. In spite of losing their home, Dyck said his parents feel blessed knowing people are safe and that they have a place to stay. They also did not have to face the trauma of emergency evacuation surrounded by wind and fire.

MDS is waiting to be called in to volunteer with clean-up and rebuilding. Peter Goertzen, the MDS rep in La Crete, has made contact with town administration and tried to get in to see what is needed. “We haven’t been in there yet,” he said on May 26. “They are starting to let residents back in. . . . Nobody’s prepared for this kind of thing.”

Many of the destroyed homes were bulldozed before residents could see them. “It’s a little like burying the body before the family has had a chance to see,” Goertzen said. He is frustrated and sad about the situation, predicting there will be added grief because of it.

As of May 26, MDS and other organizations such as Samaritan’s Purse didn’t know what they might be called upon to do. “There’s a good possibility [MDS] will be in the rural areas,” Goertzen speculated. “The rural area has lost 59 houses. Those have not been [bulldozed].”

Meanwhile, heavy rains in southern Alberta, combined with snow melt from the mountains, caused a number of rivers to flood, including Little Red Deer River, which bisects Camp Valaqua. At one point, the water completely covered the bridge that allows access to the camp from the north.

Camp staff told Canadian Mennonite that they aren’t particularly concerned. When the river floods, it only affects one shed and a swimming area. The only loss at this point is the swimming dock that got swept downstream and the slide that used to be attached to it is missing. 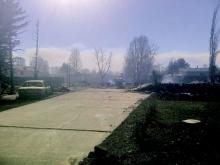 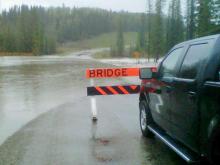 The Water Valley bridge over Little Red Deer River flooded this spring, blocking access to Camp Valaqua from the north.