‘I need to go to school’

Mennonites provide relief in the Democratic Republic of the Congo 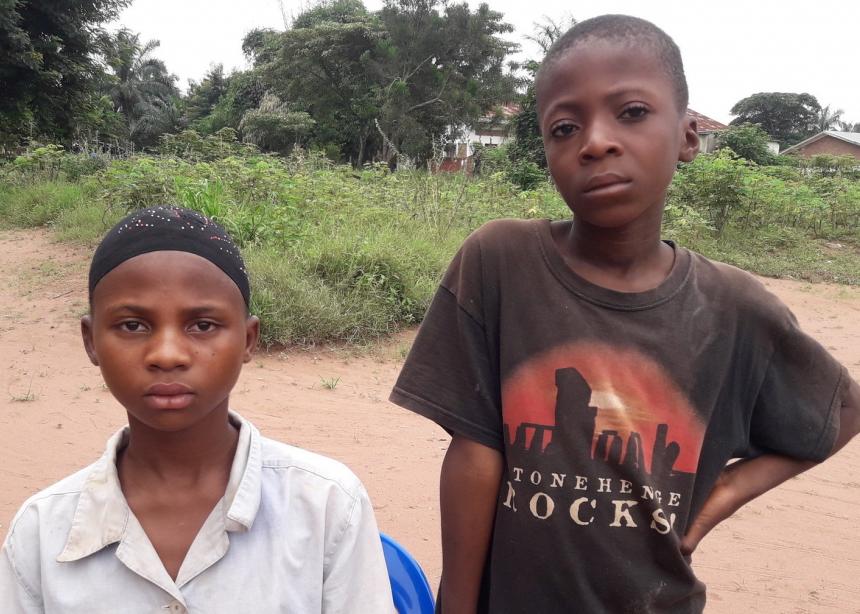 Ten-year-old Kanku Ngalamulume fled from his home in the village of Senge after armed groups beheaded his mother and father and his siblings too.

He was among 1.4 million people in the Kasai region of the Democratic Republic of the Congo who have been forced from their homes as violence among local militias and the Congolese military erupted in August 2016.

Through tears, Kanku told Mennonite Central Committee (MCC) representative Mulanda Juma that after his family’s death, he ran with other villagers into the bush. They travelled on foot for five hours to reach the city of Tshikapa, where Mama Agnès, another displaced person, has been taking care of him.

In February, when he spoke with Juma, Kanku said he felt hopeless: “We eat only once a day in the evening. I have no hope, for any reason.”

In July, Kanku and Kapinga Ntumba, a 12-year-old orphaned girl who fled Kamonya village in April 2017 after armed men killed her parents, told MCC program manager Matthieu Abwe Luhangela that they were happy to receive the food distribution, but that more would be needed for the months ahead.

“I am taken care of by a lady whose name is Mary,” Kapinga told Juma in February. “We are living in a church down there in Tshikapa. I was at school before I left. I need to go to school.”

The churches are responding to the need for education by paying school fees for more than 500 students. When school started in September, the children also had uniforms to wear and school supplies to use.

They will have more food, too, because the churches are supplying 1,180 households in Kabwela, Kikwit and Tshikapa with a five-month supply of food in August. The food, which is funded with $528,000 from MCC’s account at the Canadian Foodgrains Bank, will cover a gap in food consumption while households with access to land can prepare fields, plant and harvest crops.

Currently, the number of displaced people from the Kasai region has decreased to about 900,000 people, but the conflict there has caused severe food insecurity in the area, affecting as many as 3.2 million people. According to UNICEF, as many as 400,000 children are at risk of dying from malnutrition.

The churches are working with MCC to develop livelihood recovery initiatives to support families who are able to return home and for those who remain displaced. In addition, planning for peacebuilding and trauma healing is underway.

“Glory and honour to God for having, by his Holy Spirit, placed in you this sentiment of love, which is an expression of active fellowship,” said Jean Felix Cimbalanga Wa Mpoyi, president of the Evangelical Mennonite Church in Kabwela. “My thanks and all of my gratitude go to our partners, who deliberately chose to feel the misfortune of the Congolese by bringing food aid. Your prayers always have a very positive impact in the life of our churches.”