Mennonites join to provide food and shelter in DR Congo 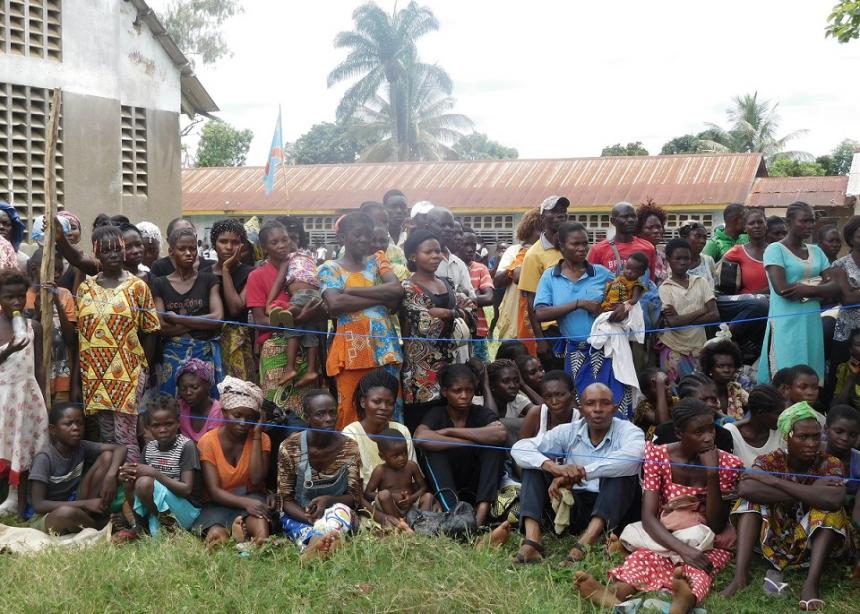 These displaced families, who are staying in the Kikwit District of the Democratic Republic of the Congo, wait to receive a month’s supply of food and non-food emergency assistance, including flour, beans, oil, sugar, salt, tarps and soap. (MCC photo by Fidele Kyanza)

Displaced people who recently received food and shelter supplies distributed by Mennonite churches in the Kasai region of the Democratic Republic of the Congo (DR Congo) have seen unimaginable horrors.

Innoncente Ngandu Tshalu’s husband was murdered by the local militia. Majilu Mulembo’s house was burned down by another armed group. Monique Meta was forced to leave behind everything she owns, to run with nine children.

About 1.4 million people from the Kasai region in south-central DR Congo fled ethnic and political violence that erupted in August 2016 between a local militia group, Kamuina Nsapu, and national security forces. An estimated 5,000 Mennonites are among those forced from their homes.

Tshalu, Mulembo, Meta and many other displaced people found safety near the town of Tshikapa, Kasai Province. They have been staying with strangers, in churches and anywhere else they can.

On Wednesday, Nov. 29, the Mennonite Church of Congo (Communauté Mennonite au Congo or CMCo) distributed one month’s supply of flour, beans, oil, salt and sugar to 280 displaced households staying in Tshikapa. The church’s local relief committee also provided soap and tarps, which serve as shelter from the rain or privacy within cramped, temporary living conditions.

“Many people don’t have shelter, and some of them lost their fields. There are real dire situations, and many have lost everything they own,” says Fidele Kyanza who, on behalf of Mennonite Central Committee (MCC), helped coordinate the distribution.

The week before, on Nov. 20, Kyanza also worked with Mennonite Brethren Church of Congo (Communauté des Églises de Frères Mennonites au Congo or CEFMC) to distribute the same supplies to 180 displaced families in the city of Kikwit in Kwilu Province. Food quantities were based on an average seven-member family.

Both distributions were coordinated in partnership with MCC and supported by numerous Mennonite organizations around the world.

Zacharie Mputu Lukadi, a CMCo elder and member of the local relief committee, says the distribution not only helps save lives, it gives people hope. “Now people trust the church to help them.”

MCC and the Congolese Mennonite churches have been working on a response plan for several months. Security and logistical challenges along the way delayed the response until now.

Nevertheless, MCC’s representative in DR Congo, Mulanda Jimmy Juma, says the assistance came at a crucial time and met needs that weren’t being addressed by other organizations.

“Most displaced people are in very dire situations,” he says. “Very few organizations are providing assistance, despite the high level of need. In the name of Christ, MCC with other Anabaptist groups want to help meet the needs of these vulnerable people who are suffering because of the crisis in Kasai.”

Majilu Mulembo says she will share the food that she and her seven children received with their host family. The distribution means that her children will have porridge and she will be able to eat three times a day instead of having a little food once or twice a day, says Mulembo, who is pregnant.

The urgent needs will continue, so MCC encourages ongoing donations. To contribute online, visit mcc.org/congo-relief. Donations also can be given by phone at 888-563-4676. 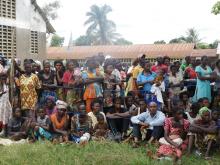 These displaced families, who are staying in the Kikwit District of the Democratic Republic of the Congo, wait to receive a month’s supply of food and non-food emergency assistance, including flour, beans, oil, sugar, salt, tarps and soap. (MCC photo by Fidele Kyanza) 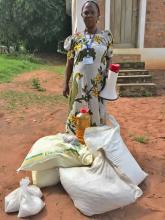 Monique Meta, who is a leader of displaced people who received food and shelter supplies from the Mennonite Church of Congo, stands with the supply of food she received at the Nov. 29 distribution in the town of Tshikapa, in the Democratic Republic of the Congo. A widow, she and her nine children lost all their belongings because of violence in Kamonya, where she lived. (MCC photo by Fidele Kyanza)