Mennonites in middle of desperation 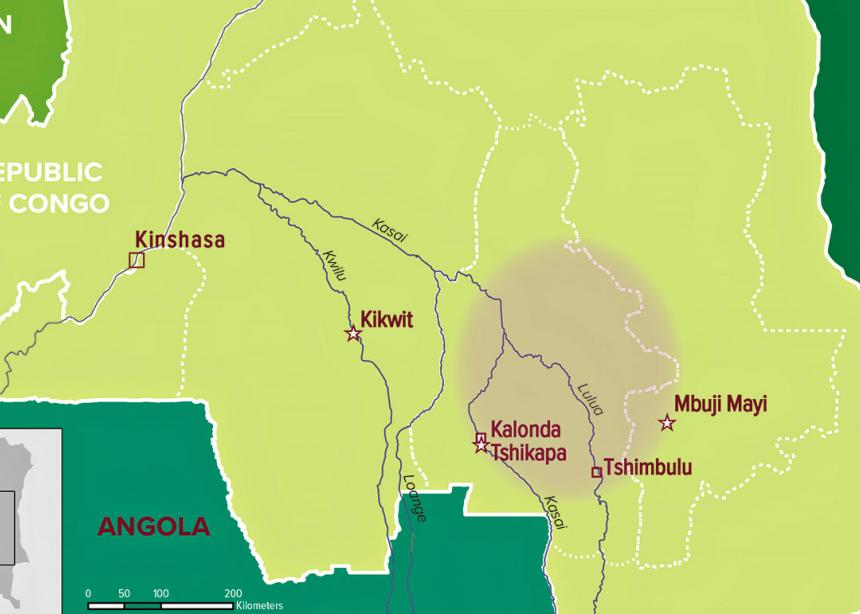 “As many as 250,000 children could starve in Kasai in the next few months unless enough nutritious food reaches them quickly,” says David Beasley, World Food Programme’s executive director, in an Oct. 30 release.

Kasai is a region of the Democratic Republic of the Congo suffering the aftermath of a gruesome armed conflict that displaced an estimated 1.4 million people, including thousands of Mennonites. The region is the birthplace of the Mennonite church in Congo, a church that is more than 200,000 strong.

While the mass killings and razing of villages—perpetrated by so-called rebels, government-backed forces and ethnically charged militias—have abated, a degree of lawlessness and paranoia has followed. Age-old tensions between ethnic groups in the region have flared up.

MCC coordinates emergency response
Some displaced people have returned, but many have not. Some have nothing to return to, says Bruce Guenther, MCC’s director of disaster response.

In addition to the lingering destruction and trauma, the economic situation in this particularly poor part of one of the poorest countries in Africa has become desperate. In many areas, the conflict has caused people to miss two planting seasons. The value of the national currency has also dropped significantly.

MCC is coordinating an emergency response shaped and implemented by Congolese Mennonite church organizations and supported by Anabaptist organizations in Canada, the U.S., France and Switzerland. The response has involved distribution of a month’s supply of food, along with tarps and soap to 460 displaced families in Kikwit and Tshikapa. The value of the aid to date is $157,000.

In an MCC release, Fidele Kyanza, who helped coordinate the response, says that, due to a lack of camps for displaced people, many families have taken in people who fled their homes. “Many times, a very poor family is receiving another very poor family into their home,” he says. "When you give support and aid to those families, you give harmony and peace."

The UN reports that only a small percentage of the funds required to address the Kasai crisis have been secured from the international community.

Mulanda Jimmy Juma, MCC’s representative in Congo, says: “Very few organizations are providing assistance, despite the high level of need. In the name of Christ, MCC wants to help meet the needs of these vulnerable people who are suffering because of the crisis in Kasai.”

Problems on the ground
A church worker involved in recent meetings in the Kasai region reports that some people, who hoped to attend, could not due to financial constraints or security concerns related to the conflict. Many who did travel to the workshops from surrounding villages were worried about returning home, as the money they had set aside for travel had been taken from them at the many roadblocks in the region.

The worker—not with MCC—asked not to be named for security reasons. He reports having been asked for money almost every time police or military personnel saw him, something that did not happen prior to the rebellion.

He also reports an instance in which a soldier duped a poor village woman into selling him a small quantity of charcoal for about 25 cents less than the price she had set. When the woman, seven months pregnant, tried to get the charcoal back from the soldier, he shot her in the abdomen. She later died. There was no investigation into the death. He says people feel they have no recourse.

The church worker also says that the people do not look to the government for hope. Rather, when caring people show up, willing to share at some level in the suffering, that is their source of hope. “We all need saving in that sense,” he says. “We all need love.”

Guenther says MCC is planning for further distributions, and encourages donations, which will, in part, determine the extent of subsequent assistance.

Atrocities
Canadian Mennonite obtained the following testimonies of violence suffered earlier this year by Mennonites in the Kasai region of the Democratic Republic of Congo: 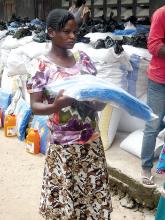 Christine Ndaya, who is displaced from Mbuji-Mayi in the Kasai region, is holding a tarp that is part of supplies distributed in Kikwit District of the Democratic Republic of the Congo. She is pregnant and has three children, who also are benefitting from food, which is also part of the supplies. (MCC photo by Rachel Bergen)