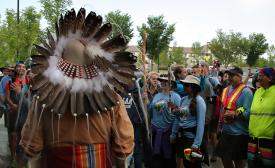 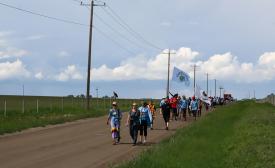 Allegra Friesen Epp carries the eagle feather at the head of the group as they walk along Range Road 11 between Airdrie and Calgary. (Photo by Jonas Cornelsen) 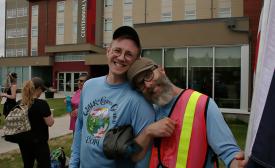 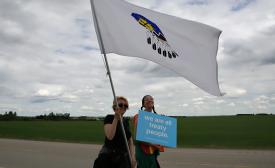 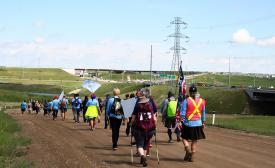 Walkers approach the edge of Calgary. (Photo by Jonas Cornelsen) 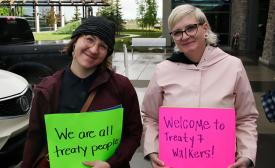 Supporters welcome the walkers at their final destination. (Photo by Jonas Cornelsen) 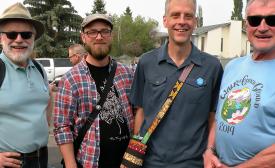 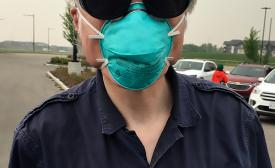 Undaunted by the poor air-quality index due to the Alberta wildfires, Vic Thiessen, former Mennonite Church Canada staffer, braves the smoke-filled air to join the Walk for Common Ground. The walk began in Edmonton on May 31. (Photo by Joanne De Jong) 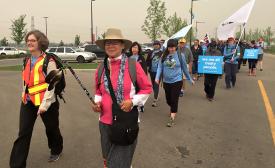 Led by Diana Steinhauer and her eagle staff, a group of Indigenous, unionist and church friends travel together on the Walk for Common Ground that began in Edmonton. The treaty walk is meant to nurture treaty understanding and relationship. (Photo by Joanne De Jong) 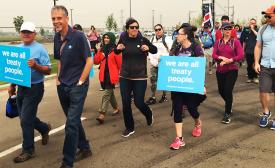 A group of Indigenous, unionist and church friends kick off the Walk for Common Ground in Edmonton on May 31. (Photo by Joanne De Jong) 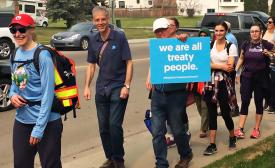 A group of Indigenous, unionist and church friends complete the first 10.1-kilometre leg of the 350-kilometre Walk for Common Ground on May 31. (Photo by Joanne De Jong)

Friends and family huddled in light afternoon rain on June 14, waiting for about 30 participants in the Walk for Common Ground to arrive in Calgary. The walkers were led in by a Scottish bagpiper, then greeted with drumming and singing by local Indigenous elders. Tears of joy mixed with the rain as walkers were congratulated for finishing their 14-day journey from Edmonton to Calgary. 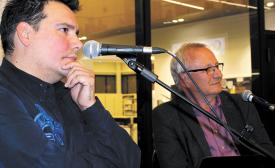 Public recognition of the traditional territory of First Nation groups that were signatories to specific treaties is a fairly new concept in Canada.