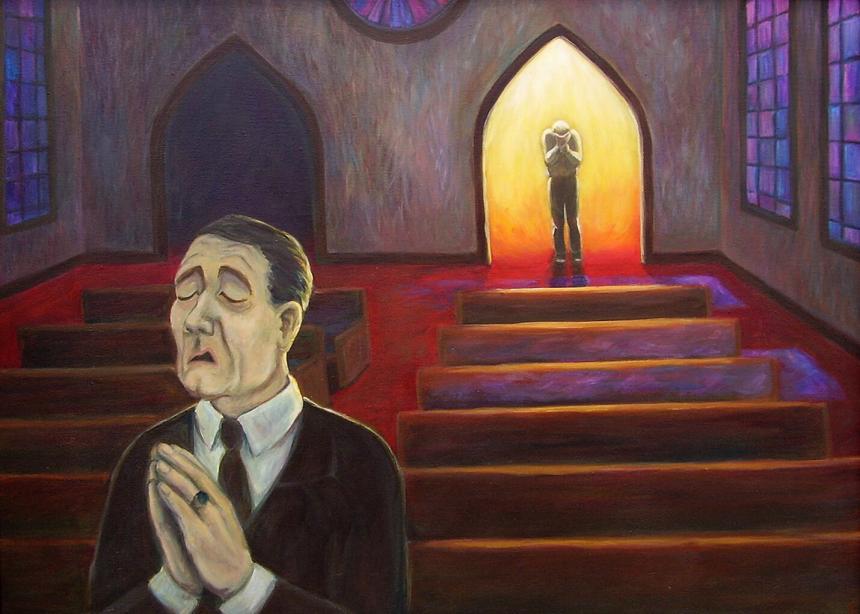 The lesson to be learned from the parable is that we, like this tax collector, must be humble in prayer and contrite in heart if we want our prayers for forgiveness to be heard.

However, if we are to truly enter this little story of two very different men who went to the temple for afternoon prayers, we will have to look beyond what we see on the surface. For if we don’t, we miss one of the most powerful ideas that Jesus presents: an idea that has the power to change the world.

A good parallel of the Pharisee today is a faithful Christian: a weekly churchgoer, a leader in the congregation and community, one who gives to the poor and needy, a good citizen, someone respected by his or her peers. Think deacon, commission chair, regular worship leader. These are the individuals we should have in our mind’s eye when we read this parable.

It’s not so easy to find a modern parallel to the tax collector. His job was to sit at the gate of the city and collect the Roman head tax from the people as they entered. He worked for an empire that was oppressive and in opposition to the temple and the nation of Israel. He would have been seen as a sell-out or a traitor. His presence in the temple that afternoon was trespassing on holy ground. He didn’t belong in the presence of God. If there ever could be a polar opposite of the faithful Pharisee, it was this tax collector.

So who might be a modern-day parallel? It has to be someone whose very presence in our sanctuary would make us feel uncomfortable, someone who shouldn’t be here, someone who has betrayed the trust of the church. Like the treasurer of one faith community in Winnipeg who got caught embezzling $400,000 from church donation revenues. Or a parolee who was generously helped out by the church only to return to selling drugs to kids in the community that had reached out to him. Or a church leader convicted of sexual exploitation of minors, betraying the trust of the very people he is to serve—someone whose very presence makes one desire some distance between us and them—because we are over here with God and they are over there where God is not.

That is what this Pharisee did with his stance and words in the temple: “Thank you, God, that I am not like that person over there! I’m over here with you, God. Thank goodness for that!”

In Jesus’ day, this is how the world was ordered. This is how God’s mercy was viewed. There are those like the Pharisees, who are recipients of God’s mercy, and then there are those other ones over there . . . like the tax collector, outside of God’s presence, beyond God’s grace.

Now before anyone can defend the Pharisee’s position and guffaw at the foolish tax collector, Jesus gives the parable its punch. He says that even that outsider is covered by the mercy of God: “I tell you, this man went down to his home justified, rather than the other.” And suddenly this parable isn’t about the right way to pray or one’s own humility. It is about God and the far-reaching mercy of God’s love. Mercy, it seems, isn’t just for the righteous, but is for all of God’s created ones.

We miss the connection between justification and righteousness. If you recall, Jesus says that the Pharisee is righteous; he has done everything necessary to be in right relationship with God through the Law. But Jesus is expanding the boundaries of God’s mercy to include this tax collector. Now he, too, can be made righteous by the mercy of God. That’s what justification is: being counted righteous by the Holy God of Israel.

A too-small vision of God’s mercy

A brief look at the tax collector’s simple prayer might help us expand our understanding of God’s mercy. That is what this parable does. It expands the reaches of God’s mercy. Notice how he stands as far away from the centre of the temple as he can while still being in the temple. His head is bowed down, looking at the ground. He is beating his chest, a sign of deep mourning in ancient times. And finally he self-identifies as a “sinner.” Of each of his public displays, this is the most significant.

When we think of a “sinner,” we are already thinking like first-century Christians, that all have sinned and fall short of God’s righteousness. But in Jesus’ time, “sinner” was the term given to the outsiders. “Sinners” were people who were outside of God’s grace. It was believed they had separated themselves from God simply by being who they were.

Unlike the Pharisee who was inside God’s favour, they had no hope of ever being in God’s favour. This is how the tax collector identifies himself. This is what he is mourning when he beats his chest—that he can never be covered by God’s mercy. By looking at the ground he is acknowledging that he cannot see God. By standing at a distance he symbolizes that he is outside the presence of God, beyond the reach of God’s mercy.

The only recourse he has is to plead for God to have mercy on him. And maybe, just maybe, God will somehow find the mercy that he, too, might yet be counted among those who find favour in God’s presence. When Jesus says that the tax collector is justified as he leaves the temple, it means that, yes, indeed, he is among those favoured by God. What Jesus does by telling this parable is to say that there are no insiders and outsiders. When it comes to God’s favour, there are only insiders. When it comes to God’s mercy, all are in by God’s grace.

The sad thing is that we still do this today. We still try to make distinctions between insiders and outsiders. It is still the same game of “God is on my side and not your side.” But Jesus says that God is on both sides, no matter what you—or they—say or think or do. That is the nature of God in the world.

Interestingly, these words are borrowed from a most remarkable speech. On July 16, 1992, at Madison Square Garden in New York, Bill Clinton, then the newly nominated Democratic candidate for the presidency of the United States and soon-to-be president, included the following in his acceptance speech:

“And so we must say to every American: Look beyond the stereotypes that blind us. We need each other—all of us—we need each other. We don’t have a person to waste, and yet for too long politicians have told the most of us that are doing all right that what’s really wrong with America is the rest of . . . them.

“But this is America. There is no them. There is only us. ‘One nation, under God, indivisible, with liberty and justice for all.’ That is our Pledge of Allegiance, and that’s what the ‘new covenant’ is all about.”

Does this not make you wonder about the recent presidential race? If only America could have lived into this speech, maybe they could have added “Them, the Muslims” 25 years later. In this speech is a modern-day parable:

And let us realize, we don’t have a person to waste. And yet for too long mainline religions have told the most of us that are doing all right that what’s really wrong with the world is the rest of . . . them. Them, the minorities. Them, the liberals. Them, the poor. Them, the homeless. Them, the people with disabilities. Them, the gays. Them, the Muslims. We seem to have gotten to where we have “them’ed ourselves to death.”

But this is God’s creation, this is God’s domain. There is no them. There is only us. “One people, under God, indivisible, with mercy and justice for all.” That is our Pledge of Allegiance, and that’s what the “new covenant” in Christ’s blood poured out for us all is about.

May God grant us the courage to live out these words: “There is no them. There’s only us!”

1. What kind of people would make us feel uncomfortable if we found them sitting in our sanctuary on a Sunday morning? What do we expect of people before we accept them into our circles? Do we truly believe that God’s mercy extends to all people?

2. In what areas of our lives are we most apt to justify our actions? What does the parable of the Pharisee and the tax collector tell us about the proper way to pray? What is the basis for justification and right relationship with God?

3. Can you think of situations in which there are clear lines between “us” and “them”? Who have we tended to see as insiders or outsiders when it comes to God’s favour or God’s mercy? Why do we hesitate to welcome some of “them” to become part of “us”?

4. Dan Kehler quotes from a speech by Bill Clinton, who said, “There is no them. There is only us.” What does this phrase mean? What are some things we can do to help ourselves see beyond “us”? 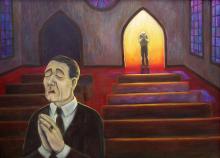 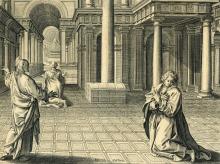