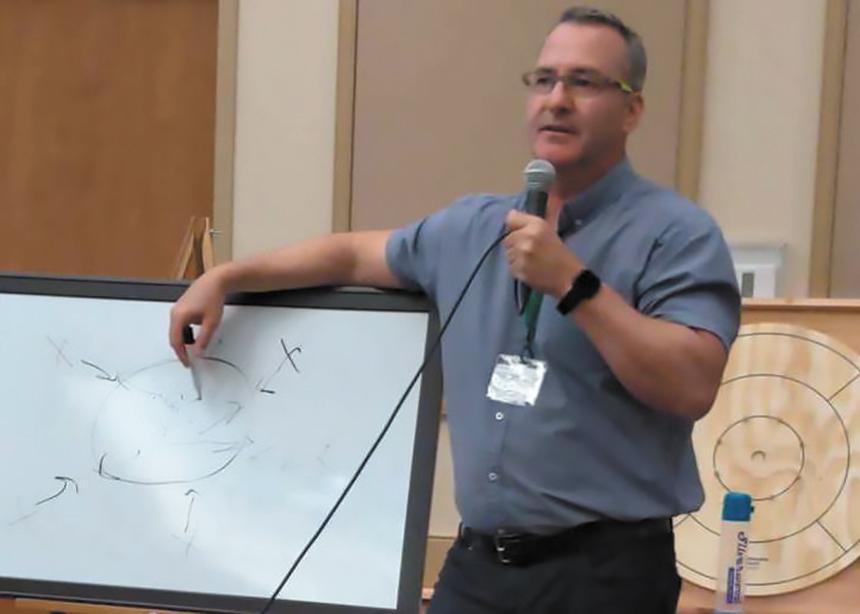 “My job is to love the people in my neighbourhood, accept them for who they are and create a safe place where they are welcome,” said Lyne Renaud, pastor of Hochma in Montreal, as she shared her “firestarter story” to spark the imagination of the church at Mennonite Church Canada’s Gathering 2019.

Lyne, along with her husband Michel Monette and their family, explored new ways of being church in their Montreal community. Her son invited a homeless man to the breakfast that the church offered to the neighbourhood. Through their ensuing relationship, Michel and Lyne accepted the invitation to dine at the man’s home.

“They were stoned and selling drugs while we were eating with them,” she recalled. “Dealers came into the apartment while we were there. My husband and I looked at each other and asked, ‘Where are we?’ ”

But each Sunday this man faithfully came to Hochma. He was stoned and stinking of the gas that he sniffed, but he was always there. Hochma was his church. He loved it and felt safe and welcomed.

When he suddenly stopped coming, people began to worry. No one knew where he had gone or what had happened. Three months later, he returned and said confidently, “I have met Jesus and I gave my life to him. I decided to get sober so I went under the bridge and stayed there to get clean of drugs. It has been three months and I am sober and want my life to be aligned with God.”

There has been a change in this man’s life and the people on the street have noticed and are talking about it, Lyne said. He is now the director of Care Montreal, an organization Hochma started with his help, to offer a warm place at night for homeless people. “He is on a mission with Jesus in the neighbourhood to help the city become more and more Christlike,” said Lyne. “Truly, no one is better to take care of that centre because people in the neighbourhood have seen the changes in this man’s life.”

• Colin McCartney trains young urban leaders in Toronto to lead and plant churches in their urban and often under-resourced neighbourhoods. “Someone has to step outside of the walls of the church to build relationships, so that the neighbourhood becomes a part of the church,” he said during his “firestarter story.” “God so loved the world that he sent his son into the world—into the community, the neighbourhood. There are a lot of good people already living in urban centres who can plant churches in their own neighbourhoods, among people and in settings that they are a part of already.”

• Maysoun Darweesh and her husband, Nour Ali, are Syrian refugees. While travelling abroad in 2006 and alerted by friends not to return to Syria, the family found themselves in Macau, China. Their life upturned and with no opportunity to work, they did not know what they were going to do. China was not welcoming refugees to resettle there.

While in China, they met George and Tobia Veith, and through them became connected to Douglas Mennonite Church in Winnipeg, which sponsored them to come to Canada. Shortly after their arrival in 2013, they asked if Douglas Mennonite might also sponsor their brother and sister-in-law, Brian Darweesh and Reem Younes.

"Darweesh and Younes had had a small civil wedding service with no family in attendance,” said Don Rempel Boshmann, pastor of Douglas Mennonite Church. “Reem had always dreamt of having a wedding, a proper wedding.”

Krista Neustaeder Barg from Douglas Mennonite helped Younes’s dream come true. The wedding was complete with a wedding dress, suit, family and friends, along with heartfelt smiles and tears.

Since 2013, Douglas Mennonite has sponsored 21 Syrian refugees. “It has just snowballed and keeps rolling along. We are so fortunate to be partnering with Maysoun and Nour,” said Boschmann. “It has been wonderful.”

• Vine and Table is a community for young adults and students to live, learn and grow in a Jesus-centred community. Located in Saskatoon, Terri Lynn and Thomas Friesen opened their home for young adults to engage in household life and spiritual growth. The couple live on site as part of the community, and offer mentorship and support in academic study and vocational exploration. They named their home Vine and Table; the vine represents growth and the table represents sharing life together.

• Donna Entz, a Mennonite worker with Muslims and African immigrants with MC Alberta, has been forming relationships with Christian and Muslim communities in Edmonton for the purpose of dialogue. “Dialogue is an authentic way of doing witness, especially in a North American setting,” she said. Through A Common Word, Alberta Christians and Muslims meet to reduce misunderstandings and stereotypes that can come between people groups.

• The seeds of hope are the gifts of stories that interrupt the darkness,” said Darnell Barkman, pastor of Yarrow United Mennonite Church in B.C. He highlighted four categories to direct missional thinking:

The stories encouraged congregations to intentionally find the seeds of hope in their communities to see what interrupts the brokenness in the world and brings healing and hope. 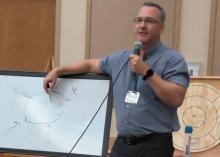 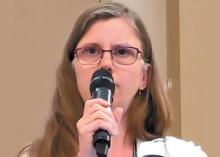