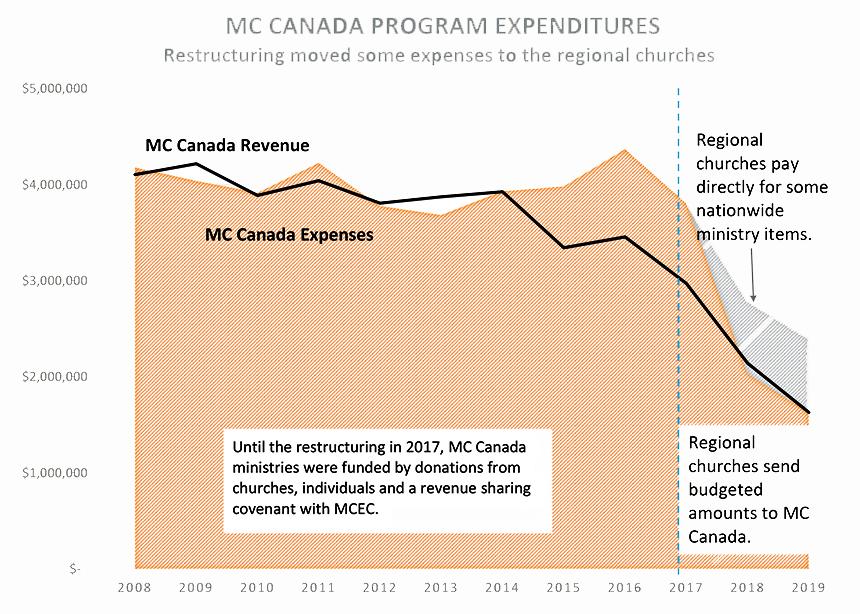 A much simplified Mennonite Church Canada organization turned an expected $239,000 deficit into a surplus of $42,000 for the fiscal year ended (FYE) Jan. 31, 2019. The modest surplus was the result of higher-than-forecast revenue from the regional churches, and lower- than-expected expenses in nearly every budget category.

In the new church structure, adopted in October 2017, the 200-plus congregations that make up MC Canada are asked to send all financial contributions to the five regional churches. Each of these regional churches commit in their budgets to send a specific amount to MC Canada for shared nationwide ministries.

The $1.7 million program of FYE 2019 is a drastic contrast from budgets of more than $4 million a decade ago. The reorganization was prompted by long-term declines in institutional giving and a multi-year visioning process. Staff reductions were painful, as some programs were eliminated and others were handed over to the regional churches to carry instead.

In the new structure, a Joint Council, consisting of representatives from each regional church, meets quarterly to co-manage the nationwide church agenda. To approve the budget, the work of the Joint Council and the overall direction of MC Canada, regional churches selected and sent 84 delegates who attended Gathering 2019.

At the June 29 morning delegate session, secretary-treasurer Allan Hiebert explained that the transition to the simpler program was complicated. “The MC Canada accounts contained many other small funds set aside for various purposes. We have been researching the original intended purposes of these funds, and trying to see how the original intentions of these funds can best be honoured within the current nationwide church reality,” he said, adding that MC Canada is working towards sharing the finance department roles with MC Eastern Canada and MC Manitoba. “This is still a work in progress,” he said.

Delegates approved a balanced budget for FYE 2020 of $1.63 million, based on the amounts committed by the regional churches.

Moderator Calvin Quan said that, among all the nationwide commitments that the regional churches are pursuing, “the work of International Witness continues to be a significant priority,” and that “focus on Indigenous-Settler Relations ministry continues.” He said there is no consensus on how best to approach the latter. “Living into these calls to action . . . has tested our commitment to seek reconciliation with our Indigenous neighbours as much as it has challenged us to seek consensus on a complex issue with varying understandings across our nationwide church.”

Quan was referring to the mixed reaction of Mennonites when MC Canada staffer Steve Heinrichs was arrested for participating in a protest against pipelines in British Columbia in August 2018. In response to the event and concerns raised from the constituency, the Joint Council drafted a policy for MC Canada staff called “Speaking publicly and acts of conscientious civil disobedience.” The draft has not been made public but it was listed as one of the actions of Joint Council from the past year that delegates were asked to approve.

Doug Johnson Hatlem, co-pastor of Erb Street Mennonite Church, Kitchener, Ont., raised the concern that there are times when acts of civil disobedience are important, and he asked for clarity on the document.

Subsequent to that brief discussion, delegates voted to approve the actions of Joint Council. 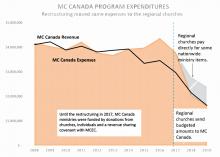 I appreciate the measured response of leaders as only a few are now charged to represent a nationwide body. I much appreciate Steve Heinrichs prophetic ministry still continuing on our behalf. I'm praying that this work may continue to "seem good to the Holy Spirit and to us" (Acts 15).