“Many members are not happy with the direction and general content of the magazine,” writes a Mennonite pastor, in a solicited follow-up note after one of his members cancelled his subscription. The member was unhappy because Canadian Mennonite has put “homosexuality as a priority,” rather than reflecting our church life. 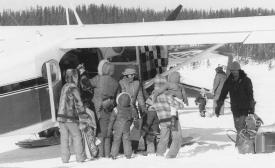 Indigenous students and their families arrive by plane for a Mennonite-run Bible school at Stormer Lake in northwestern Ontario in 1981. (Photo by Martin Frey) 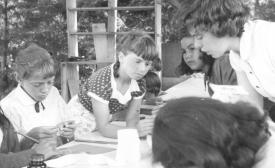 Children from indigenous communities in northern Manitoba are pictured with their teacher at a summer camp in Loon Straits, Man., in the 1950s. (Photo by Edwin Brandt, courtesy of the Mennonite Archives of Ontario) 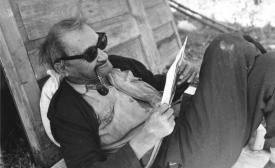 A resident of the Beardy’s & Okemasis Willow Cree First Nation in Saskatchewan reads a thank-you letter from MCC Canada for his donation of $5 in 1968. (Photo courtesy of the Mennonite Archives of Ontario) 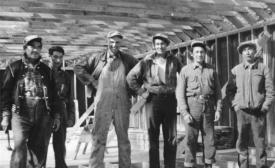 Henry Berg, third from left, and indigenous men build a chapel at Cross Lake, Man., sometime in the 1950s. (Photo courtesy of the Mennonite Archives of Ontario) 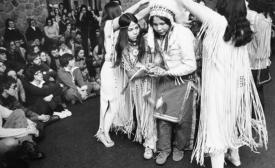 The Niagara Iroquois Dance Group performs in the chapel of Conrad Grebel College as part of ‘Tandi: Symposium on Native Peoples,’ held Jan. 20 to 22, 1976. (Photo courtesy of the Mennonite Archives of Ontario)

“History,” wrote American poet Maya Angelou more than 20 years ago, “despite its wrenching pain, cannot be unlived, but if faced with courage, need not be lived again.”

The term “settler” for Canadians of European descent was popularized by Roger Epp in his 2008 book, We are all Treaty People. This term acknowledges—rather than ignores—the conflicted history of the colonial project that began in Eastern Canada in the late 1500s.

In an appendix to Ambassadors of Reconciliation, Vol. II: Diverse Christian Practices of Restorative Justice and Peacemaking (Orbis Books), which I co-wrote, I explored the question of how principles and practices of restorative justice might be applied to historic and continuing violence, as is the case regarding indigenous justice in Canada.

‘A biblical and better way’ is neither

Summer is an exciting time, and one that most of us tend to look forward to. Warm temperatures, long weekends at the lake or on the porch, summer sports, and, for many in the younger generations, a break from school.

I mostly managed to ignore it the first time it came around. But now when I go to the movies, there are huge, impossible-to-miss posters blaring the news that a film has been made based on the book I tried to ignore. My entertainment dollars usually go toward activities that inspire and elevate humanity.

A number of people glanced over as they passed the elderly woman working in her front lawn. She had finished planting flowers in the garden and was now struggling to plant a sapling to replace a tree felled by a wind storm the previous summer.

“Can I help you?” offered a young man stopping in front of her house.

The Supreme Court of Canada ruled on Feb. 6, 2015 that our current ban on physician-assisted death (PAD) is not in keeping with Section 7 of the Charter of Rights and Freedoms. 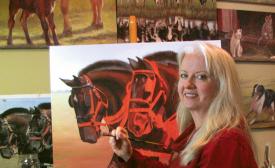 Artist Lynda Toews is pictured in her studio with some of her works from ‘A place in the kingdom: Paintings and heritage stories celebrating farm animals,’ on display at the Mennonite Heritage Centre Gallery in Winnipeg until June 20. (Photo by Gary Brown) 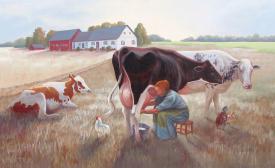 ‘Supper Chores’ by Lynda Toews (acrylic on canvas) - ‘I recently learned that there was a time when cows were milked right on the field, instead of being herded into barns,’ says artist Lynda Toews. ‘Of course the farmer may only have owned a few cows. The housebarn in the background was my great grandfather’s in Blumenhof, Man., and the late autumn afternoon landscape is invented.’ 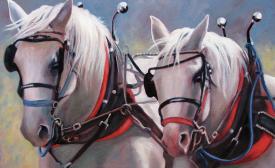 ‘Equally Yoked’ by Lynda Toews (acrylic on canvas) - ‘I obtained permission from Janet Kehler, the graphic artist for the South East Manitoba Draft Horse Association, to use her photograph of Mark and Tracy Bergen’s Percheron mares,’ explains artist Lynda Toews. ‘Many of my paintings are based on photographs that members of this association have allowed me to take of their horses and this is much appreciated.’ 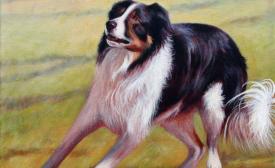 With brilliant and detailed clarity, Manitoba artist Lynda Toews has painted a series of farm animal portraits that will be on display at the Mennonite Heritage Centre Gallery in Winnipeg from March 13 to June 20. 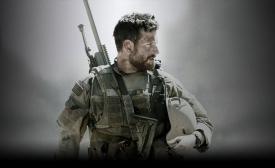 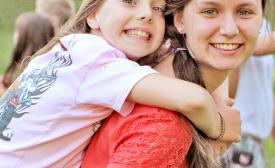 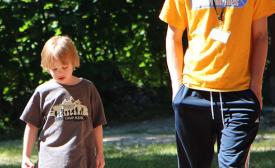 At Camp Squeah, we care a great deal about our young adult staff. We believe that a community of staff that cares for one another and treats each other as Christ-like as possible creates a fertile environment for campers to be affected by God’s great love and good news. 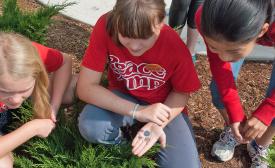 I love camp. I love the silliness, the excitement and the community. Most importantly, I love the learning opportunities and teachable moments that camp can offer. Camp provides an atmo-sphere for growth: budding friendships, self-discovery and confidence-building experiences that young people carry with them throughout their lives. 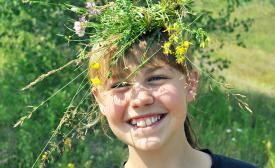 Whimsy is something that campers seem to take to naturally. (Hidden Acres Mennonite Camp photo)

Like ripples flowing from the point where a stone hits the water, the choices we make everyday spread out from us and impact others. 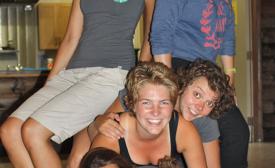 This coming summer is a milestone in my camp career, being 10 years since I started spending my summers in leadership at Shekinah Retreat Centre’s summer camp. There are a lot of memories here, and a lot of these revolve around a circle of loving women who have guided and supported me over the past 10 years. 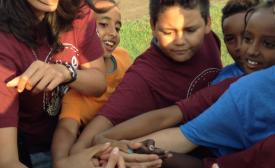 ‘Raise the peace’ camp facilitator Lishai Peel came from Toronto and had a way of helping the youth take off their ‘cool masks’ and open up with one another. (MCC Saskatchewan photo)

As summer staff, part of our job was planning and implementing a peace camp titled “Raise the peace” in the Meadowgreen area of Saskatoon last August. This area is home to many newcomer families from about 20 different nations. 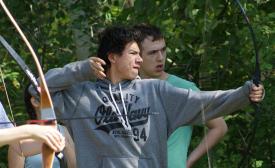 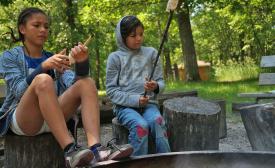 Roasting bannock around a campfire is a time-honoured tradition at summer camp, including Camp Assiniboia. (Camps with Meaning photo)

To feed our mind we go to school, to fix our body we go to the doctor, to feel our hearts we go home, and for our soul to flourish—that is when we go to camp! 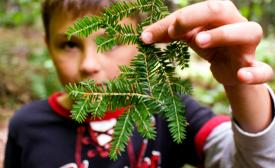 By spending nearly all day, every day outdoors, campers unconsciously relinquish their fears and open themselves to the wonder of God. (Photo by Rebecca Seiling)

This year marks 60 years since Fraser Lake Camp began in a farmer’s field northeast of Bancroft, Ont. Since then, the camp has evolved and now covers 105 hectares of forest, field and lakefront. 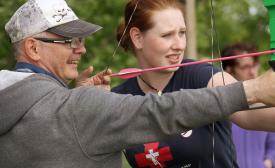 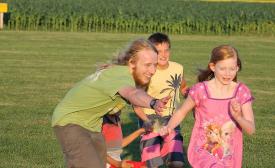 Youth Farm Bible Camp is just that: Bible camp in a farm atmosphere.

Located outside of Rosthern, Sask., we have wide open spaces holding pastures for horses, goats and sheep, and the many paths of our corn maze. Although some things around the yard have changed over the past 74 years, we still hold the same mission: to share Jesus and provide a place to serve. 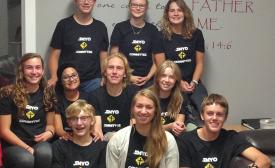 Mennonite youth in Saskatchewan are raising their voices and offering a perspective on some of the controversial issues facing the denomination.