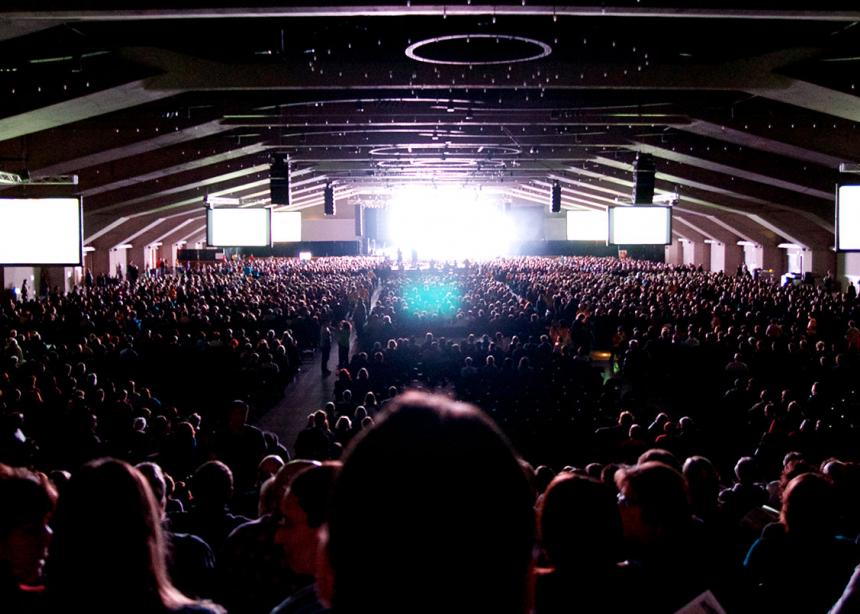 Over the past while, a number of people have inquired about my thoughts on a recent “Theology matters” study conducted by Canadian scholar David Haskell that draws a strong connection between theological conservatism in Canadian mainline Protestant churches and church attendance.

According to the study, mainline Protestant churches that interpret the Bible more “literally,” hold to more traditional theological doctrines and are open to more contemporary expressions of worship, tend to be the ones that are growing, while those that emphasize their opposites are shrinking. The study has been covered by The Globe and Mail and The Guardian, among other media outlets. And Haskell himself authored an apologia of sorts for the piece, being loosely connected to the liberal Protestant tradition that the study seems to cast in a negative, or at the very least ineffective, light.

Well, the first (unremarkable) observation I might make is that the study reflects what I observe to be true on the ground. The little church I am a part of—which contains a delightful if sometimes bewildering mixture of conservatives and liberals—is a stone’s throw from a church of more than a thousand people in one direction and slightly fewer than that in another. Both of them would largely fit the descriptors above. Across our city, I would say that, pretty much without exception, the largest and youngest churches tend to be theologically conservative. So the study did not yield any particularly revelatory insights that most pastors, whatever their theological leanings, would not have been familiar with, if only in cursory and anecdotal ways.

There are ready-made and predictable explanations for, or responses to, these findings, of course. Conservatives respond to the data with no small amount of glee, interpreting it as unambiguous evidence of their “rightness,” validating their commitment to stand as a courageous bulwark against the creeping tide of liberalism, secularism, relativism and all kinds of other pernicious “isms” that seek to infiltrate and contaminate the church. You see! People are looking for good old-fashioned biblical truth, not all that liberal mumbo-jumbo. Put most crudely, this study proves that conservatives are winning. What else could pews full of young people possibly mean?

Liberals, by contrast, have their own set of responses lined up. Well, sheep like to follow, don’t they? People are hungry for certainty, and love to be told what to do and how to think. People like to be entertained and so they dutifully line up for all the bells and whistles of these big flashy churches. Easy answers and large-scale impressive productions with lots of attractive programming for all ages—of course, those churches are growing! We choose to follow the simplicity of Jesus, and pursue justice and community!

Shrinking, aging churches are, while perhaps regrettable on a pragmatic level (since the bills must be paid), ironically seen as a sign of fidelity to the ethos of Jesus, of a willingness to think critically, to welcome doubt and complexity, and to hold to more traditional forms of worship.

These two options seem to me to represent the low-hanging explanatory fruit, as it were, and I am, for that reason, inclined to dismiss both of them as anything resembling a comprehensive explanation to the study’s findings. The truth is usually more complicated than we would prefer, if only because human beings are complicated creatures who do the things they do and think the things they think for a wide variety of reasons.

Are there some people whose reasoning would run along the lines above? Sure. Would it be the majority? I’m not so sure. I say this for the unexceptional reason that I know and love people across the theological spectrum. I know and love people who raise their hands during songs with rock bands at conservative mega-churches and those who kneel at the rail alongside the faithful few to receive communion at tiny liberal churches. And I know that their reasons for worshipping where and how they do are not as simple as either of the caricatures above.

For starters, much as it pains me to say it, some people care far less about theology than studies like this seem to assume they do. Sometimes people just go where their friends go. Or where the music makes them feel good. Or where people offered to help them move last weekend. Or where they can get free coffee. Or where someone asked them how they were doing one Sunday. I’ve learned to never, ever underestimate the importance of a warm welcome and a kind word. These often mean a great deal more to people than anything that comes out of a preacher’s mouth.

Having said that, theology is not irrelevant. Of course, it isn’t. And there is some truth, I think, to the claim that, in general, people prefer certainty to ambiguity. Perhaps especially in our postmodern world, where everything seems up for grabs and nothing seems solid, where the Internet has exposed us to a tidal wave of information and we have few tools for sifting out fact and fiction, and where so much that once seemed predictable and reliable now seems not to be so. In this context, people might be looking for one area of life where things are just black and white.

Or at least where they are presented as black and white.

It is equally true that just because the customer is happy, it doesn’t necessarily mean the customer is right. Not always, at least. The fact that all the young, cool people are flocking to theologically conservative churches doesn’t, in and of itself, say anything conclusive about whether or not their approach to the Bible or theology is the best, or even the only faithful one. They might have some things right. Indeed, they almost certainly do. They might also have a few things wrong or, at the very least, less right than they think they do. Certainty is among the most attractive idols on offer, it seems to me, and it never lacks for devotees.

The same is true for liberal churches, of course. Smallness is not a badge of honour in and of itself, as if they alone are the faithful remnant who have heroically stuck with Jesus, while the masses brazenly chase after the harlot of numbers and entertainment and certainty.

Open-mindedness and innovation, and a willingness to tolerate diversity, doubt and uncertainty, are appropriate responses to a point. But only to a point. If these become reasons for being in and of themselves; if churches define themselves as not being like those nasty, big, conservative churches; if churches forget that God actually has spoken in Jesus Christ and that there actually is important and non-negotiable content that underlies our convictions and commitments—then it’s not hard to understand why such churches would be shrinking.

The preceding analysis probably doesn’t surprise many readers. I suspect that I am neither conservative enough for my conservative readers, nor liberal enough for my liberal readers. At any rate, I think that a study like this shows less than we are inclined to imagine they do. Theological truth and biblical fidelity cannot be reduced to an attendance referendum. Much as we might prefer such simple metrics, this is not how things work. It’s not how they ought to work, at any rate.

One last thing. As I said above, I know and love people from across the theological and ecclesial spectrum. And what I know from experience and from their strong example to me, is that in nearly every church—no matter if it’s big or small, conservative or liberal, traditional or progressive, no matter how we label and thereby limit one another with these descriptors—there are people who really love Jesus and who are trying to follow him faithfully, even as they make mistakes and stumble along the way.

This is encouraging and, in my view, entirely what we ought to expect. After all, we have cast our lot with One who frustratingly refused to be limited to existing structures and categories, and who stubbornly offered life and light across the many and varied boundaries that human beings laboured to maintain and police. Thank God.

Ryan Dueck is pastor of Lethbridge (Alta.) Mennonite Church. His Rumblings blog, where this first appeared, can be found at ryandueck.com.

1. Ryan Dueck suggests that a warm welcome and a kind word generally mean more to people than the theology of a sermon. Do you agree? How much do you think theology matters to people in the pew? If you were new in town, what would attract you to one church over another?

2. As you think about your community, which congregations are growing and which are declining? Do the growing or larger ones tend to have more traditional theology with more contemporary expressions of worship? Are the liberal churches the ones that are shrinking? Do you have an explanation for this phenomenon?

4. Dueck describes a study that found a “strong connection between theological conservatism and church attendance.” What message does this study have for you and your church? Is church attendance a good measure of faithfulness?