Taking off the mask

‘Erin is a beautiful butterfly, testing her wings in what sometimes seems to be an unforgiving world,’ says Alma Wiebe of her transgender daughter 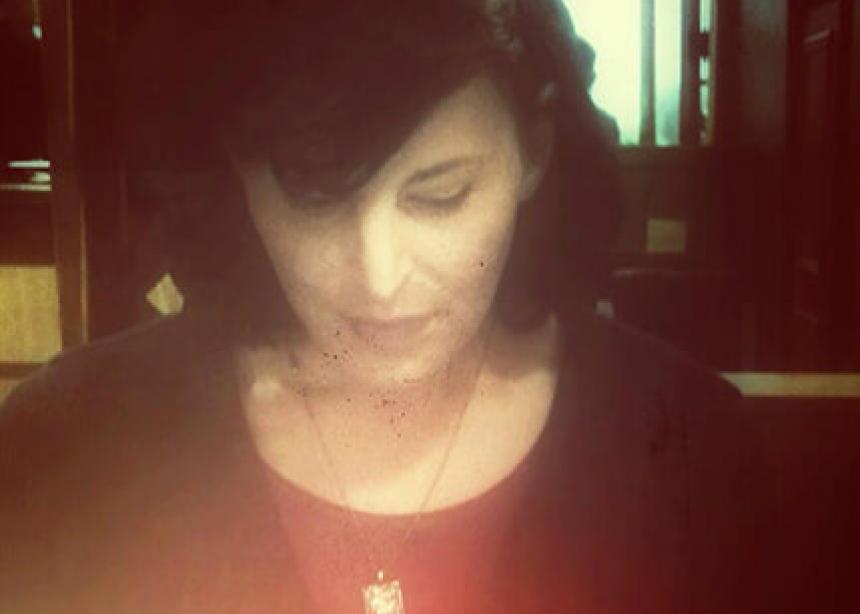 Childhood is all about the endless possibilities, the dreams that will come true if you wish hard enough.

Erin Wiebe’s childhood was no different in those ways. She knew if she wished hard enough, the dream of her outside appearance matching the way she saw herself would become a reality. Every night, Erin says she wished she would wake up a girl.

In fact, Erin was born with a gender variance: she is transgender, identifying as female, opposed to the male sex assigned to her at birth.

Being transgender wasn’t her choice, nor was it a result of the way she was raised. Scientific evidence presented in a 2008 BBC online story maintains that people experience gender variances because of genetic differences, brain structure and function, and exposure to certain hormones in utero.

“Like you, my gender identity is an innate, fixed part of who I am,” Erin says. “I can do no more to change it than I can my race.”

On her 15th birthday, everything changed for Erin. She recalls being at her grandparents’ home in Alberta. She woke up on a Sunday morning to her family getting ready for church. She stepped in the shower and realized her dreams wouldn’t come true.

“I was 15 and terrified of what male puberty was doing to my body. I began to resign myself to the harsh reality that had suddenly replaced my childhood innocence,” she says. “I was trapped in this body. I would never wake up the next morning in the body that I needed. No amount of wishing would change the situation, and I began to hate myself.”

Erin says she wore a metaphorical mask, hiding her true identity and projecting a false self that was more socially acceptable in her community, for the better part of her life. In fact, she didn’t tell anyone about her struggle until she was nearly 40.

“I made the decision to forever lock that part of me away because there was nothing I could do about it,” she says. “I was ashamed and I felt that everyone would think I was a pervert or something. I was so afraid. For all I knew, I was the only one in the world that felt this way.”

Even when Erin met a woman, fell in love and got married, she didn’t reveal her true self to anyone, not even herself. Erin met her wife when she was 16. They got married when Erin was 20 and had a child together.

“When I got married, I thought, ‘If I try, maybe I can manage to be what she needs me to be and what society expects of me,’” she says, but she couldn’t.

Erin loved her wife and their son, but she suffered crippling depression. She had nobody to talk to about her gender crisis and difficulty accessing resources. This is common in the trans community.

Erin also realized she had a false impression of other trans people. “My own ideas about transgender people were highly skewed and ill informed,” she says. “I had no experience or exposure to others like me. I thought being trans was to be like drag queens: flamboyant and highly sexualized. They were the type of people you would see at Mardi Gras, not walking down the street. I soon realized I had many of my own trans-phobic issues to work through if I was to explore my gender identity authentically.”

“I was so ashamed. I didn’t want to risk everything by telling my wife,” she says.

Erin’s bouts of depression intensified and became more frequent. They became so bad that she isolated herself and contemplated suicide nearly every day.

One day, Erin saw a group of high school girls talking and laughing with each other. “I suddenly realized I’d never experience the freedom these girls enjoyed and took so much for granted. To simply be yourself, to laugh and enjoy yourself effortlessly with a group of friends. I fell apart inside. I broke down and wept. I knew then that I was at a point where I either had to do something about it or I was afraid I would just go out on the highway and drive into oncoming traffic. I was so close.”

Finally, Erin worked up the courage to do something about it.

It was 2010. Erin put her son to bed and sat her wife down to talk. “I told her, ‘I’m transgender.’ I thought if I presented all the evidence in the right way, we could get through it,” she says. The couple went to counselling and therapy, but there was no reconciling the relationship.

Erin’s parents, Art and Alma, who are members of Bethel Mennonite Church in Winnipeg, say they didn’t have any idea that she was suffering from a gender-identity crisis. It was a complete shock when she came out to them when she was 38.

Art says they never had the closest relationship with Erin but never understood why. “Imagine misdiagnosing the real gender of your own child,” he says. “Now that the mask is off, we are proud parents to a daughter we can finally embrace. We’ve always misunderstood her,” he says.

For trans people, hormone therapy is one of the first steps in the process of transitioning into one’s true self. The same was true for Erin after she came out to her family.

She eased into it by taking testosterone blockers and small doses of estrogen.

“It’s a rather strange experience to go through a second puberty at 38,” she says. “This time, it was the right puberty. My skin softened, my breasts were growing and I grew my hair out. But more importantly, I felt an inner calm I’d never known before.”

Before she began taking estrogen, she says paying attention was very difficult.

“It was like standing on one side of a busy road and trying to hear a bird sing,” she says. “Everything I did demanded all of my attention and all of my energy. A few months after starting hormone replacement therapy, I realized I was able to focus my thoughts in a way I was never able to before.”

“The dysphoria I felt was beginning to ease and as my mind relaxed, the noise in my head quietened. It felt as though the traffic had ceased and I could hear the bird without effort or strain.”

The pieces started to come together, but there were still problems.

Erin says there was also a gap between how she imagined herself and how she looked. Her masculine-looking face was especially difficult for her to look at. “I would shower in the dark, shave in the dark to avoid looking at myself,” she says.

For Erin, it was important to correct the incongruence she felt between mind and body before feeling comfortable presenting herself to the world in an authentic way. In 2013, she travelled with her parents to Thailand to undergo facial feminization surgery. And in 2014 she underwent sexual reassignment surgery in Montreal, again with her parents by her side.

“I often think of Erin as a butterfly,” Alma says. “Erin is a beautiful butterfly, testing her wings in what sometimes seems to be an unforgiving world.”

The need for support

Throughout the process, Art and Alma attended Bethel Mennonite Church and participated in its Pilgrim Group, a support group for lesbian/gay/bisexual/transgender/queer (LGBTQ) people and their families and friends. In turn, they found the strength to support their daughter through her transition process of taking off a proverbial mask.

Erin, who has not felt comfortable in the Mennonite church for many years, compares her transition to being a prisoner who has been kept in solitary confinement for her whole life. “Suddenly one day the jailer unlocks the door and says, ‘Here, you’re free to go,’” she says. “To the prisoner who hasn’t known anything other than a life lived in a horrible dark cell, how would they know how to go out and explore the world like everyone else?”

While Mennonite Church Canada is currently discerning issues of sexuality through its Being a Faithful Church process, Art and Alma believe that people suffering from gender crises need particular support.

“I feel it’s imperative that the church learns to treat transgender people, as well as homosexual people, as normal human beings who happen to have a birth variance,” Alma says. “They need to be accepted, affirmed, loved and encouraged in life, just like anyone else.”

“Our diversity isn’t an ethical or moral issue,” Erin says. “It’s just what is.”

Gender: Refers to the personal sexual identity of an individual, regardless of the person’s biological and outward sex.

Gender dysphoria: The formal diagnosis used by psychologists and psychiatrists to describe people who experience significant discontent with the sex they were assigned at birth or the gender roles associated with that sex.

Gender variant: A person who varies from the expected characteristics of the assigned gender.

Sex: A categorization based on the appearance of the genitalia at birth.

Sex reassignment surgery: The surgical procedure by which a person’s physical appearance and function of his/her existing sexual characteristics are altered to resemble that of the other sex.

Transgender (or Trans): A term for those who identify with a gender other than the sex they were assigned at birth. 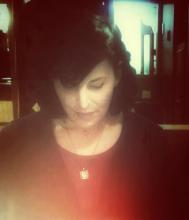 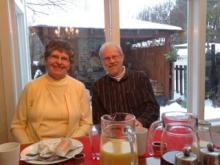 Thank you,CM,for publishing these real life stories about LGBTQ individuals and their families. We need to hear them.

Sharing so deeply takes a great deal of courage. Thank you for trusting us with your story.

I thank God for Alma and Art! May parents like that keep growing in number. And may the church learn from their example.

As a parent of a female to male Transgender child I appreciate your courage in telling your story and wish your family happiness as you journey on.
My experience has been that there will always be those who don't have a understanding of what Gender dysphoria is and until you walk through this experience with your loved one it will be so.
Thanks again

What a beautiful testimony of God's love! Art and Alma, you are wonderful parents! Erin, you are a beautiful and courageous woman.

Thank you for sharing your story of love for your daughter Art and Elma. I am happy to have you and Erin as a part of my family. May we all love first as God did. Amen

Thank you for sharing your experience with us! It takes courage, love, and faith to open up about such a personal experience, but I know that your words will make a dramatic difference to others who are also struggling with transgender and other difficult personal issues!

Thank you for publishing this article on how a family overcame a life-threatening crisis through strong support from family and a support group in their church. You have given us a wonderful example of what it means to welcome, accept and affirm and encourage all persons regardless of their gender. We hope that this example will continue to inform us as we go through the process of Being a Faithful Church.

There was no mention of God or Jesus, not even the Bible. Those are the foundations of the Mennonite faith as I understand it.

The current trend in gender ideology is not consistent with biblical hermeneutics, nor by credible biological and psychological studies. I have studied all three subjects at a master's level.
Here is one such article by The American College of Pediatrics, jointly written by three medical doctors, including the President of the American College of Pediatrics.
http://www.acpeds.org/the-college-speaks/position-statements/gender-ideo...