Outside his comfort zone 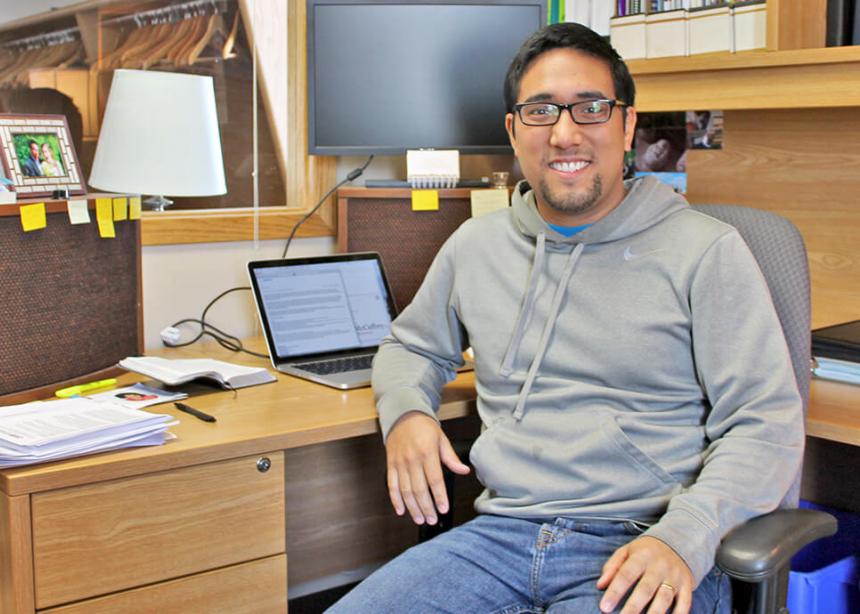 Although he feels inadequate, Falco—who is the sole pastor at Sterling Mennonite Church, a Mennonite Church Manitoba congregation in Winnipeg with a membership of about 140—is confident that God, as well as his brothers and sisters in the church, will help him along.

“Something I’ve learned is that God takes us out of our comfort zone and puts us in places where we have lots of room to grow,” says Falco, 25. “I trust that God has put me in this position for a reason, and I will learn and I will grow.”

A Toronto native, Falco always thought about becoming a pastor. He is the third of five children, all sons, born to a German mother and a Filipino father who worked as a church planter and pastor. Whether it was people in the congregation he grew up in at Heron Park Baptist Church, or members of his extended family, Falco was surrounded by people who told him he should go into ministry,

“I felt that call was always there,” he says.

After graduating from high school, Falco studied for six months at Bodenseehof Bible School, a Capernwray school in Germany. Afterwards, he stayed another six months doing an internship at the school. During this first year, he met and fell in love with his now-wife, a Mennonite named Jessica. After the internship, Falco spent a year volunteering at a church in southeast Germany.

He describes his time in Germany as formational, as it allowed him to learn and ask questions. “I think I have most of my stories of personal encounter with God, and with understanding my faith, that took place during those two years,” he says.

He recalls a period when he was feeling burned out and depressed while volunteering at the church. Here he was in Germany, giving his time and doing service for God, and yet he felt down. Falco couldn’t understand why he wasn’t feeling God’s love.

One day, he walked to a nearby park to pray and look for answers. But when he prayed, he got something instead of answers: The words “I love you” looped through his head over and over.

“He didn’t really answer my question and I think that wasn’t even really the point,” Falco says. “Maybe God was telling me, ‘You’re not going to know right now, I’m not going to explain it all to you.’ And that was enough for me to just rest in. It really changed things for me in terms of how I was feeling and it gave me new energy and new life in that moment.”

Falco moved back to Toronto for a year, got engaged to Jessica and moved to her home city, Winnipeg, when they got married. He began attending Sterling Mennonite Church and enrolled at Canadian Mennonite University (CMU).

While studying at CMU, Falco was hired to work as a graphic designer in the communications department of Mennonite Church Canada. Discussing matters of faith with co-workers stretched Falco’s thinking on topics like the church’s response to lesbian/ gay/bisexual/transgender/queer people, Israel-Palestine and indigenous-settler relations. “It opened my eyes to different interpretations . . . of Christian faithfulness,” he says. “I see faith and the world in a very different way than I did before.”

Last year, when Sterling Mennonite was looking for a new pastor, someone from the congregation asked Falco to apply. He did, and eventually got the job. While he’s still new to the role, Falco says he most enjoys studying the Bible, preaching and visiting with the church’s members.

“Those are the times when I get to know people on a deeper level and hear their story,” Falco says. “I’ve learned so much hearing the stories of the people at Sterling.”

He adds that he is thankful for the people in the church. “I can’t say enough good things about our church and the level of support they’ve given me,” he says. From the beginning, both Falco and the church acknowledged that he is young, just finished school and new to ministry. “In their commitment to me, it was a realization that we’re going to grow together in this, which not every church is willing to do. In that sense, I’m really grateful for what they’ve done.”

That kind of support, as well as relying on God’s grace, helps Falco when he’s feeling inadequate. “When we ourselves are weak and feel we can’t do it, those are the moments when we allow God to work in our lives,” Falco says. “I trust that God is working through me and working through Sterling. . . . It’s God working through us that gives us that hope.”

More stories about the journey to ministry:
Flipping on the pastor switch
Remade from the inside out
Letting Christ abide, from Saskatchewan to Gambia
From Mexican Quaker to Canadian Mennonite
Prodigal pastor
Called to be a part of the church 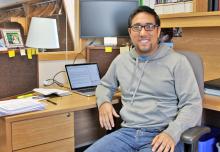 Thanks for a great "primer on Moses"! We love him at Sterling Mennonite! His humility shadows his love for the church and its members. We saw in him the enthusiasm that we needed to gently guide us in some deeper discussions. Moses is a gift to our congregation!