Large bequest ‘threatened to swamp us’ 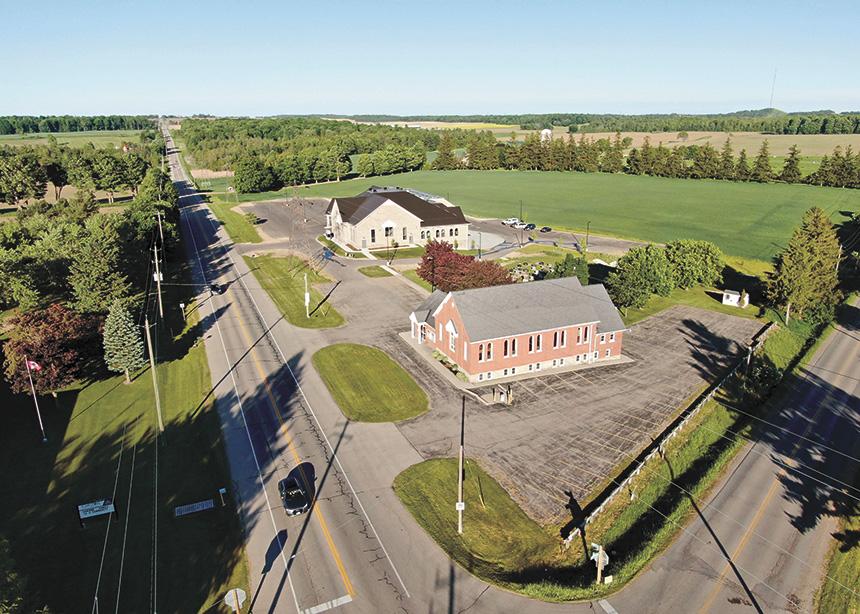 Shantz Mennonite Church held a dedication service on Sunday, June 5. It was intended to be for our new facilities, but in truth, it was primarily a rededication of ourselves. Like other followers of Christ, we have been aware that God is calling the church to a new beginning—one that reestablishes its centeredness in a way of life where all are beloved, welcome and authentically known. The word “all” is key.

God has been at work at Shantz Mennonite, seeking to convince us that we are loved and believed in—that we are enough. That is no small leap of faith given the prosperous community we live in, with its emphasis on success and self-sufficiency.

Eleven years ago, an interim pastor noted that our congregation was pressing up against a ceiling of sorts. An unusually large youth group was taking us to the limits of our building. Looking back, some might say we were also coming to the edge or limits of our faith. In the following years since her comment, we found ourselves with several opportunities to step out of the boat of our self-reliance, reaching for the strong hand of the Lord in the midst of waves of turmoil and change.

One enormous wave that threatened to swamp us was that of being the recipients of a large bequest. We were gifted several million dollars by the estate of Enid and Harold Schmidt, longtime members of the congregation. The back story is that Harold had been a very successful businessman, owning several farms, along with a telephone company or two. He died first, leaving Enid to decide in her will how to direct their accumulated wealth. She chose to designate half to Mennonite Church Eastern Canada and half to her congregation.

As the bequest money started to come in, we had many conversations about what to do with it. We wrestled with giving it all away, recognizing there were great needs in our world. We also named our fear that this money could cause conflict and division among us. Perhaps our worst fear was mishandling it, reaping shame from the community looking on.

Through much prayer and discernment, we began sensing God wanted us to run with this windfall—first of all to see it as a sign of God’s confidence in us to work together with heaven. That thought was both deeply affirming and hugely intimidating. Who were we to be worthy of such trust?

What we have learned is that it was never about us being more deserving. The money would become an experiment in learning to let go of our fears and need to be in control, learning to trust the Spirit as well as each other.

The congregation’s participation in each of these choices has been huge and holy. It has required great amounts of time and energy to learn to discern the way. In the process, new talents and wisdom emerged, thanks to the Spirit providing the right people for the needs of the moment.

At the dedication of the new building on June 5, church leaders thanked pretty much everyone in the congregation of about 120 for their participation in the many planning teams overseeing the design, finishing, and furnishings. The overall principle each group worked with was to create a space that would feel welcoming, especially to the community. Early comments affirm the thoughtfulness of the layout and its usefulness.

The large gym is especially drawing interest as a venue for sports and family celebrations. The multipurpose room is loved by the women’s community Bible study group. The sanctuary, with its many half-round “pillars” installed for acoustic purposes, is proving to be a joy to sing and listen in.

Our vision is to bring people together, build relationships, and reflect the values of our faith in God, and we are doing that by creating space for the community to join us for pickleball, volleyball and vacation Bible camp. There is a need for meeting venues in our area, and events such as reunions, conferences, weddings, recitals have been booked. Our intent is not to run a side business as a rental hall; it is to expose people to our kindness, warmth, and reliance on God.

We at Shantz Mennonite Church are humbled by these gifts and give God the glory! 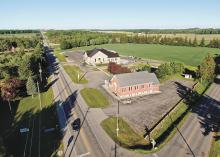 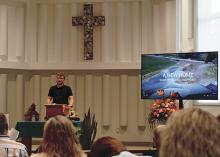 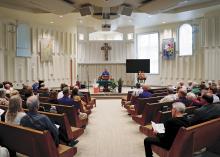 Mike Shantz, co-chair of the build team, speaks to the congregation in the new sanctuary of Shantz Mennonite Church. (Photo by Ken Ogasawara) 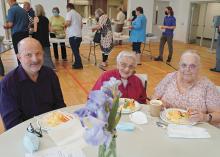 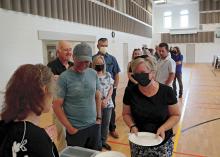 Kathy and Andy Oja receive food from Liz Plumtree, at the celebratory lunch in the new gym. (Photo by Ken Ogasawara) 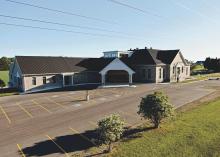