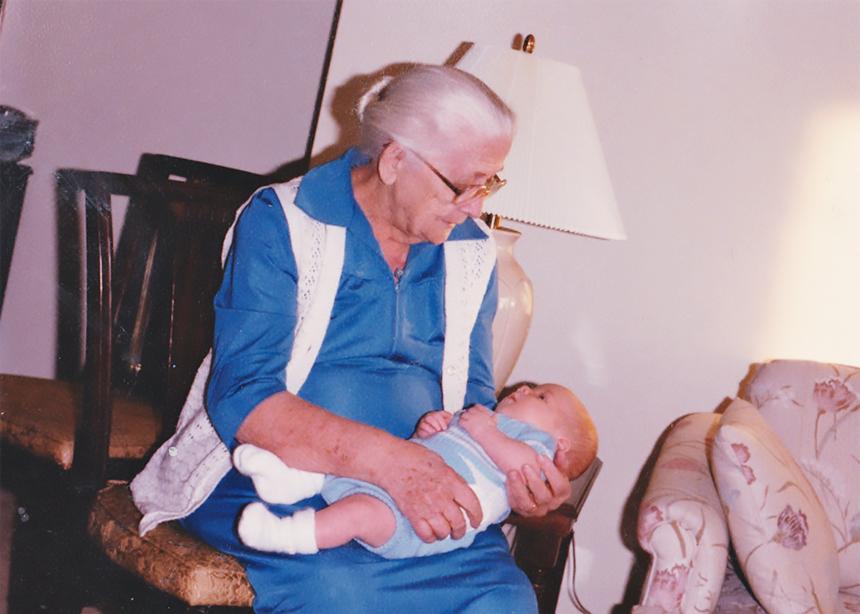 Margareta Sawatsky Peters meets one of her great-grandchildren for the first time. (Photo courtesy of MaryLou Driedger)

My grandmother’s chicken noodle soup was the stuff of legends. My father has told me that when he was a young boy, his mother would make chicken noodle soup for people in their village in Manitoba who were sick or had experienced some family tragedy. If it was winter, my father would deliver his mother’s soup using a little sled pulled by his dog Rover.

How did Grandma Margareta Sawatsky Peters make her famous chicken noodle soup? To find out, I asked her daughters, and they responded eagerly with lots of information.

Grandma only used hens well past the egg-laying stage for her soup. Their heads were chopped off on a chopping block. The feathers were then plucked, after which the hairs on the chicken were singed in an alcohol flame.

It was a matter of some skill to divest the chicken of its innards. Entrails were fed to the barn cats as a treat.

The chicken was cooked in a large pot of boiling water along with peppercorns, star anise, a cinnamon stick, bay leaves and large bunches of parsley tied together with thread.

Grandma made her own noodles, drying them on a laundry rack and saving the water in which she boiled them to starch Grandpa’s shirts.

She got flour for her noodles by bringing wheat from their farm to the mill for grinding. The eggs for the noodles came from her chickens, and the milk and butter came from the family cows. Sometimes Grandma would devote an entire day to making noodles, so she would have a ready supply for many months.

According to my aunts, Grandma did not have a written recipe for her soup; she kept sampling it while it was cooking and adding things until it tasted right.

Giving noodles as a present was also a holiday tradition. Until she moved into a nursing home, Grandma continued to regularly receive noodles as a gift from a niece she helped to raise after her mother died in childbirth, and from a cousin she and Grandpa sponsored to come to Canada after the Second World War.

When Grandma visited me after my sons were born, she came bearing a jar of noodle soup, along with various handstitched items she had made for the babies.

Grandma’s chicken noodle soup was a favourite of my younger son. Once, when he was about five, and we were making the 90-minute drive to Grandma’s home for a visit, he wrote and illustrated a story about the way his great-grandmother made her special soup. In his story he gave the soup certain magical qualities.

I think Grandma’s soup was magic because of the way every spoonful conveyed her love and care for us.

Find the recipe and detailed explanation for this soup at: canadianmennonite.org/chicken-noodle-soup/.

MaryLou Driedger is the author of the recently published novel, Lost on the Prairie, and the librarian at Bethel Mennonite Church in Winnipeg. 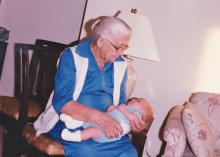 Margareta Sawatsky Peters meets one of her great-grandchildren for the first time. (Photo courtesy of MaryLou Driedger)