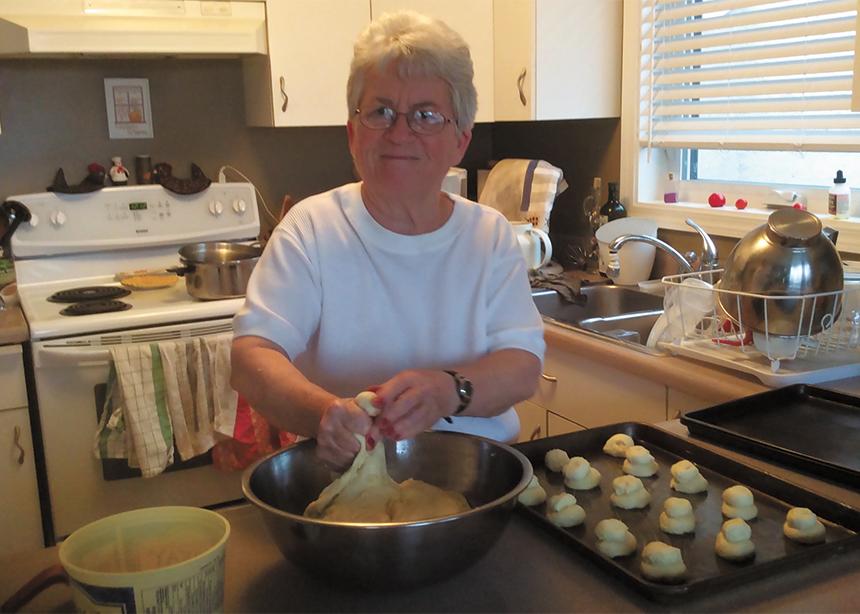 My earliest memories of food go back to my childhood in the Chaco, Paraguay, where my family lived from 1947 to 1952. Our family, like the others in our village, were refugees from Ukraine. We had arrived from Germany on the the S.S. Volendam, a Dutch freighter, with nothing but the clothes on our backs.

With six children under the age of 12, my mother baked bread every other day in a clay oven outside. Until we were settled and able to grow our own crops, every family in the Neuland Colony received rations of food through Mennonite Central Committee. Our mother saved yeast from one baking to the next.

We had a stubborn, half-wild cow that my mother had to milk every day. It didn’t supply us with much cream, but the Ratzlaff family, which had come to Paraguay in the 1930s, had a ranch at the far end of our village and often helped us out. Sometimes they even gave us cream that we could churn into butter. Rolling that jar of cream back and forth on my knees until it separated and turned into butter was one of my jobs. I loved butter and was known to sneak some when I thought no one was looking!

Our mother believed in making birthdays special, and she knew how to do that with the little we had. She would take some paper, fold it several times and cut beautiful designs into it. She called them snowflakes, and described to us what snow was like as she cut out the paper doily. At breakfast, the birthday child would get the doily, and on top of the doily our mother placed a special bowl.

Our grandmother had sent three bowls in a package from Canada. They were plastic and brightly coloured red, green and blue. We children gave them names, that’s how special they were. The blue one was called “faith”; the red one, “love”; and the green one, “hope.” We would fill our cups with small pieces of bread, then we added cinnamon, sugar, and just enough milk to soak up the bread. We turned them upside down into our little bowls of faith, hope and love, and that was our delicious birthday cake! No other birthday cake ever tasted as good, not even the angel food cake our mother learned to bake in Canada!

Many years later, in 1984, when I was living in Canada with a family of my own, I got to know a saint. She loved to bake zwiebach (small double buns, a smaller one sitting on top of a bigger one), and at every church potluck we knew that there would be zwiebach from Johanna. She told me that she found baking zwiebach relaxing and de-stressing. I wondered how that could be when it seemed to me quite a complicated affair.

At the time of her husband’s passing, Johanna had made zwiebach for the reception following the funeral—a labour of love!

Now that I am retired, I love to bake zwiebach as well, and I have become known in our church as the “Zwiebach Lady.” My recipe comes from a cookbook made as a fundraiser for Parkwood Mennonite Home in Waterloo, Ont., called: 1999-International Year of Older Persons. The recipe was submitted by Gloria Dirks, Parkwood’s director at the time. These zwiebach turn out perfectly every time.

It is Johanna who told me the secret of really good zwiebach: “Use margarine instead of butter; it makes them lighter.”

Find the zwiebach recipe I use by visiting canadianmennonite.org/zwiebach-recipe.

Elfrieda Schroeder is the “Zwiebach Lady” at Jubilee Mennonite Church in Winnipeg. 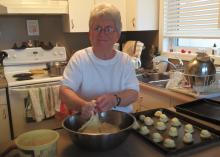 I appreciate seeing you in your kitchen, Elfrieda, being as creative as you are at the computer, writing. Thank you for posting this on Facebook, which has led me to the entire article.