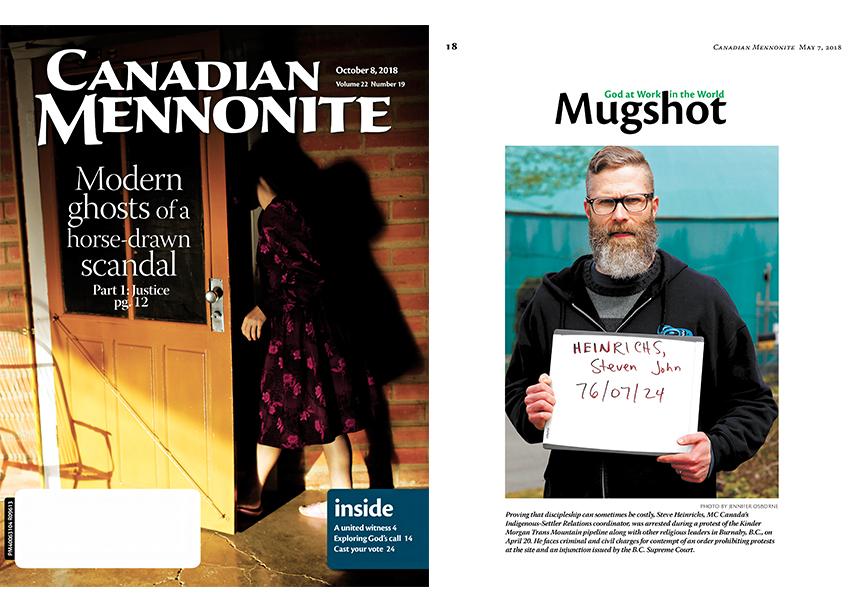 • A.C. Forrest Memorial Award for Socially Conscious Journalism, circulation under 10,000:
Senior writer Will Braun, author (“Modern ghosts of a horse-drawn scandal, Part IV: Humility,” Nov. 26, page 18). Judge’s comment: “This is more than a deft book review [of Miriam Toews’s Women Talking] and analysis, often written in the first person. . . . It endeavours to expand the boundaries of what is ‘socially conscious religious journalism.’ ” The award includes a $1,000 prize.

• Feature photo-magazine, circulation under 10,000:
Noah Friedman-Rudovsky, photographer (“Modern ghosts of a horse-drawn scandal, Part 1: Justice” cover photo, Oct. 8). Judge’s comment: “This is a wonderful photograph on so many levels. . . . I like photographs that make me look around and, in doing so, I find more things to look at. In the course of doing this I found that the chair was just a shadow.”

• Front cover-magazine, circulation under 10,000:
Noah Friedman-Rudovsky, photographer, and Ross W. Muir, designer (“Modern ghosts of a horse-drawn scandal, Part I: Justice,” Oct. 8). Judge’s comment: “A great, simple photo that leaves lots of space for type, and which directly supports the story. . . . The shadows symbolically link to the scandal. . . . A really great, super-effective cover.”

• Editorial-magazine, open:
Virginia A. Hostetler, author (“Questions of conscience,” May 21, page 2). Judge’s comment: “Well-laid argument that doesn’t fall on one side or the other of an issue relevant to the readership, but rather an argument to persuade the community to make an informed decision on the issue. It’s an excellent call to action, where that action is reflection on the issue.

• Edition layout and design magazine, circulation under 10,000:
Betty Avery and Ross W. Muir, designers (Jan.15 issue). Judge’s comment: “This issue features a lot of purpose-shot photos, which adds to the already high quality. . . A great issue of a great magazine.”

• News photo-magazine, open:
Jennifer Osborne, photographer (“Mugshot,” May 7, page 18). Judge’s comment: “This photo looks like a mugshot, with the seriousness of your subject’s face. He does not look happy . . . well framed the way you have him almost caged in within the frame is very dramatic.”

• News story-magazine, open:
Amy Dueckman (now Amy Rinner Waddell) and Ross W. Muir, authors (“Mennonite arrested at Kinder Morgan pipeline protest,” May 7, page 19. Judge’s comment: “This is very good journalism. Yes, we learn of Mennonites being arrested, but we also learn of dissenting points of view from within the Indigenous community and elsewhere. . . . The editor and the writers deserve credit for this balanced approach.”

• Personal experience/first-person account, circulation under 10,000:
Henry Neufeld, author (“From ‘never a teacher’ to ‘why not?’ ” Sept. 24, page 4). Judge’s comment: “A valuable piece of history told by a man who, with his wife, had direct experience teaching in Indian Day Schools in Manitoba. He and his wife’s willingness to learn Cree and Ojibwe for bilingual classes didn’t go over well with the federal Department of Indian Affairs. But he did what he believed was right.” 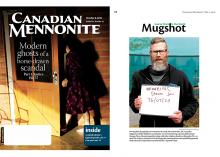