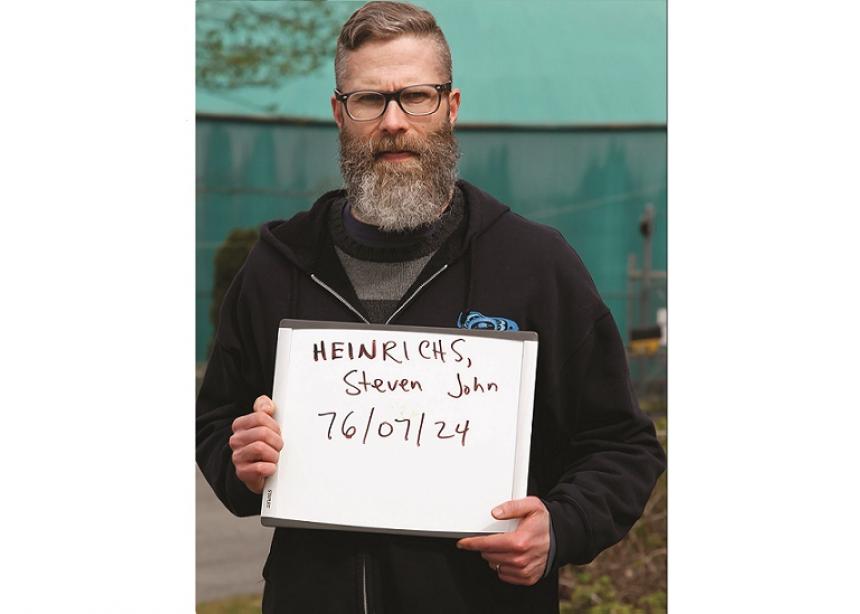 Steve Heinrichs, Mennonite Church Canada’s Indigenous-Settler Relations coordinator, is pictured while being arrested on criminal and civil charges for contempt of the order and injunction by the B.C. Supreme Court during a protest of the Kinder Morgan Trans Mountain pipeline by religious leaders in Burnaby, B.C., on April 20, 2018. (Photo by Jennifer Osborne)

Three Mennonites were among the faith leaders who blockaded the entrance to Westridge Marine Terminal in Burnaby, B.C. for several hours on April 20, protesting the planned expansion of the Kinder Morgan Trans Mountain pipeline system.

Among them was Steve Heinrichs of Winnipeg, originally from Burnaby, who was arrested on criminal and civil charges for contempt of the order and injunction by the B.C. Supreme Court.

“We wanted to prevent vehicles from getting into the workplace and continuing construction,” he told Canadian Mennonite. “We knew we were doing something against the law of the land, in our sacred tradition of obeying God rather than men.”

Representatives from Tsleil-Waututh First Nation had invited religious leaders to join them in opposing the project, and as Mennonite Church Canada’s Indigenous-Settler Relations coordinator, Heinrichs felt moved to respond.

While RCMP officers read the injunction, the protesters sat on the ground in front of the terminal entrance. They responded by quoting articles 25 to 29 of the United Nations Declaration on the Rights of Indigenous Peoples (UNDRIP), which state that Indigenous peoples have the right to the lands and territories they have traditionally occupied, including rights of conservation and protection of the environment of these lands.

Heinrichs said local Indigenous people are not supportive of the pipeline project and, at the very least, are asking for proper dialogue.

“The Supreme Court of Canada has declared that the federal government has the duty to consult with First Nations on projects that have potential impact on their lands,” he said. “They believe it poses a threat to climate change and the watershed. The work they’re doing is on behalf of us all. We’re all enmeshed in a system that relies on fossil fuels.”

Heinrichs clarified that “arrest” for him did not involve being taken to jail in handcuffs; he was photographed on site and served with papers to appear in court on April 24.

Krause said he thought it was important to respond to the call for church leaders to walk alongside Indigenous people in their opposition to the twinning of the Kinder Morgan pipeline. One of the main concerns, he said, is that the pipeline construction goes against the rights of Indigenous people to be involved in “free, prior and informed consent” about Indigenous land as outlined in the UNDRIP declaration.

“Given that Mennonite Church Canada has been supportive of the Truth and Reconciliation Commission, and said yes to affirming and living into the ‘Calls to Action,’ and given that Mennonite Church Canada has also repudiated the Doctrine of Discovery, it is important for the church nationally and regionally to ‘put feet’ to the decisions that we have made,” Krause said. “I am concerned about the building of the pipeline through this First Nations land without respect for their concerns about the environmental damage that this will cause.”

Heinrichs hopes that Mennonites in Canada will continue to pray for and support Indigenous peoples in the work they are doing. “We don’t have to have it all figured out,” he said. “Just be present and praying, be curious. If you’re able to form a position, join us. Take courageous steps. God’s inviting us into a conversation of faithfulness.”

“Some First Nation leaders have voiced their concern with provincial groups seemingly speaking for every community,” the story continued. “Cheam Chief Ernie Crey said the public must be careful of ‘environmental groups who want to red wash their agendas under an Indigenous flag.’”

Reaction to two Canadian Mennonite posts on Facebook on the weekend of April 21-23 regarding to the religious leaders’ arrest was divided.

Herb Klein posted: “I am deeply disappointed in the stand they have taken. The protesters never think of all the economic benefits flowing from this project to the people of B.C. and First Nations communities. Very disappointing!”

Marcy Robinson responded: I disagree. These folks are looking at the bigger picture. You must have children and grand [children]. That is what they are thinking of with these protests, not just fast gain for this generation. Well done; you folks [are] brave!”

See also “Both ends of the pipeline” 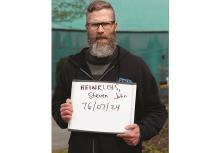 Steve Heinrichs, Mennonite Church Canada’s Indigenous-Settler Relations coordinator, is pictured while being arrested on criminal and civil charges for contempt of the order and injunction by the B.C. Supreme Court during a protest of the Kinder Morgan Trans Mountain pipeline by religious leaders in Burnaby, B.C., on April 20, 2018. (Photo by Jennifer Osborne)

I am personally acquainted with two of the three men mentioned in this article, and I know them to be men of integrity and strong convictions. I defend their right (and everyone's right) to hold views that may not be universally shared, and to express those views as they see fit. I respect and admire their action of "walking alongside." Who will walk alongside the 9 First Nations Bands (some of which are both small in numbers and economically depressed) who have negotiated with Kinder Morgan for as long as two years to secure an agreement that will bring economic sustainability and hope for their band and for their families? There is not "one mind" among First Nations on this issue. And putting the First Nations aside for the moment, who will walk alongside the families in Alberta whose livelihood depends on this industry? I will be the first to agree that justice for First Nations people has been denied for too long, and the Church ought to be walking alongside all First Nations in support. The questions around development of our natural resources and how they are mined, used, transported, etc. are equally important. My concern is about the way in which justice and politics have become intertwined, and I'm not convinced this action at the Kinder Morgan gate in Burnaby was very helpful.

Further to my previous comment, this just released: https://www.clearwatertimes.com/news/simpcw-support-pipeline-project/

Thank you for discovering that there might be two, legitimate perspectives on a story.

Did Mr. Heinrichs, Krause and Funk participate at the direction of a church or conference body, or as individuals? While I defend their right to conscientiously object, they seem to be doing so on behalf of one or two bands who are seeking to extort larger cash benefits from Kinder Morgan than the other some 40 bands in BC have agreed to. So is that principle or duplicitous negotiating we're supporting?

One item that was missed was that Henry Braun, the Mennonite mayor of Abbotsford who grew up in the Eben Ezer congregation, along with Ernie Crey, have endorsed the pipeline for its employment and community benefits. So which Mennomite speaks for whom? Or is it that they don't speak for any faith community?

And I am sure Mr Heinrichs, Funk and Krause will disagree with me, but defend my right to boycott the respective agencies they work for by sending my charitable dollars elsewhere.

Let's all speak with our own voice, and from our own 'nickel.'

Something has been said here that cannot be left unchecked.

When we see some of our Indigenous brothers and sisters stand up and defend the interest of justice and of creation and we perceive that they are engaged in extortion, this reflects a cynical and decidedly prejudiced point of view.

Whatever our voice is in the pipeline expansion discussion, our Indigenous bothers and sisters make good, legitimate and credible points (both for and against the Kinder Morgan project). It is important that we listen with grace and humility and not with prejudice.

Jesus invited us to see others through a lens of kindness and reconciliation. I pray that we do so.

Whose justice? The band that wants jobs and running water? Or the band that doesn't want Kinder Morgan to twin a line already in existence?

Just because someone believes they are right does not make them right. In a real world where interests that are not aligned need to be sorted, compromises made, and a community fashioned where many if not all get enough of what they need to flourish--that's not prejudice, that's peace.

"It is mutual trust, even more than mutual interest, that holds human associations together." --H. L. Mencken

Thank you, Walter Bergen, for your wisdom. Like you, my financial support will be directed elsewhere.

The fundamental issue is not pipelines and indigenous rights, but trust in MC Canada staff and leadership.

As pew members who pay their salaries, we are left with unanswered questions and concerns: Was this a rogue action by a denominational bureaucrat, that implicated all of us in MC Canada by association? Or was it an endorsed act by MC Canada? Is MC Canada leadership actually advocating subversive and illegal activities? Will this divisive wedge issue regrettably result in damage to MC Canada unity and to the growing understanding and support by us pew members for indigenous justice?

Trust is earned. MC Canada has lost my trust.

Being raised in a Mennonite family, I was taught that Christians do not engage in such activities as protests. Therefore, I am very disappointed that Mennonites would do protest.

It's true that First Nations - like settlers - are divided on this matter. However, that division may not be sufficient reason for inaction or neutrality. An article that helped me understand the division of opinion among First Nations on KM can be found at the following link. I highly recommend reading it: https://www.indigenousclimateaction.com/single-post/2018/04/23/I-Feel-Be...

As one of the “three Mennonite Musketeers” reported to be protesting Kinder Morgan’s twinning of the Trans-mountain pipeline, let me add another dimension to the well-articulated explanations Steve and Henry gave for taking the actions we did. So far I have been to the Burnaby Mountain site twice. While the camp has many of the trappings of a “protest camp,” I experienced it more as a soulful lament at the continuing legacy of Canadian colonialism entrenched in a legal system that privileges economic growth and shareholder value. Kinder Morgan is one expression of these values supported by Government duplicity and a legal system based on “The Doctrine of Discovery.”

Along with many faith groups we sang and prayed our lament at a project that puts the earth and reconciliation with indigenous people in jeopardy.

The more insidious side of neo-colonialism is that it co-opts Indigenous people to compromise their cultural values through coercion and denial of rights. In the words of Eriel Deranger, “I feel betrayed by the government and a system that has destroyed the spirit of my people. . . My community, like everyone else in the province, has been forced into an economic relationship with an industry that asks us to compromise and sacrifice our lands, waterways, culture and rights so that our people can put food on the table and keep a roof over their heads.” (April 23, 2018)

And so the three of us stood in solidarity with the earth and indigenous peoples in their struggle for respect, justice and dignity and commit ourselves to let our lament turn into actions for change within ourselves and our country.

Insidious colonialism.... as in vaccines, and roads, and internet, and hospitals and sewage treatment and grocery stores and refrigeration. That colonialism?