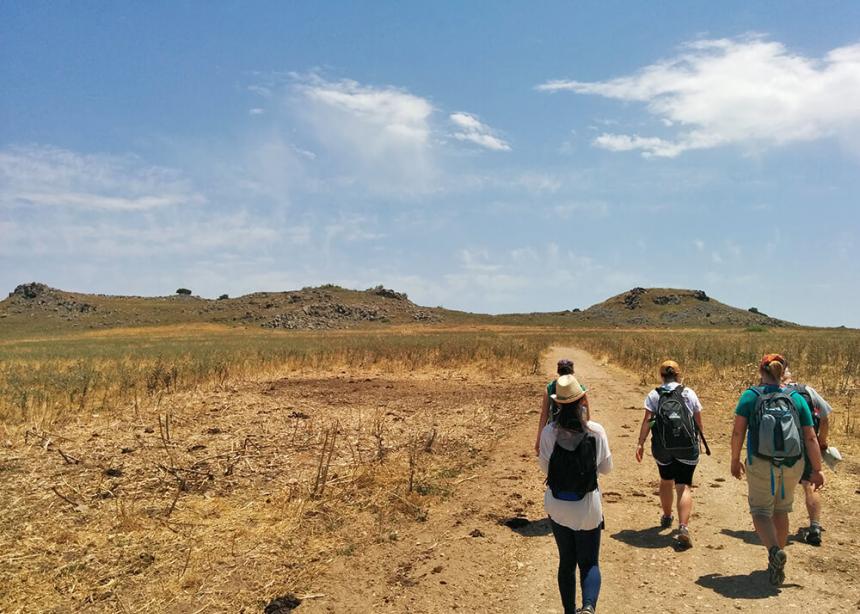 The Tent of Nations is a family farm situated in the Palestinian hills near Bethlehem in the West Bank, owned by the Palestinian-Christian Nassar family since 1916. The farm overlooks the valley of a small Arab village.

When our group visited the farm for a tour this past spring, the environmental and educational farm seemed idyllic. However, it is surrounded by five illegal Israeli settlements, one of which has a population of more than 45,000 people.

Since 1991, the family’s land has been declared Israel’s “state land,” and they have received continual threats and vandalism from settlers. The family has full documentation of the original registration of their farm, but only since 2005, and after a decade of challenging the state of Israel in court, have they been permitted to begin registering their land with the Israeli government.

Despite their continued struggles, the Tent of Nations is committed to being a working farm, educating tourists about the conflict in Israel/Palestine and building bridges with local settler communities. For them, and many other Palestinians, simply living life is an act of resistance.

The Tent of Nations is just one of the many inspiring and creative organizations I encountered on a three-week learning tour of Israel and Palestine for young adults organized by Mennonite Church Eastern Canada and Mennonite Central Committee Ontario. The trip was called “Yella!,” which means “Let’s Go!” in both Hebrew and Arabic.

The goal of the tour was for young adults to experience the context of Jesus’ gospels and learn about the current conflict in the area. It didn’t take us long to realize that the two subjects are related, especially in an area of the world where contemporary events are informed by deep historical, religious and geographical contexts. Jesus lived under Roman occupation at a time when saying, “Love your enemies, and pray for those who persecute you” to a group of oppressed Jews was nothing short of revolutionary.

Our itinerary exposed us to multiple viewpoints. We were hosted in the homes of both Palestinians and settlers. We spent a day with Christian Peacemaker Teams in Hebron, Palestine, and another at Oranim, a Jewish university in Haifa.

We embarked on a two-day trek through the Galilee hills, retracing a likely route that Jesus would have travelled, and spent a few memorable hours walking along the “Apartheid Wall” in Bethlehem. The people we met along our way repeatedly challenged our prejudices and assumptions. Everywhere we went, we encountered people who were open to talk about their unique experience of the conflict.

We quickly found ourselves faced with many questions, and equally quickly found that there were few concrete answers. Whose claim to the land is more legitimate? Whose suffering is more valid? What obligations do we now have as witnesses to the conflict? Despite the often overwhelming amount of information, we attempted to understand the conflict’s roots.

Often, as in the case of the Tent of Nations, we found land, and the cultural or religious significance it carries, at the heart. Cultural narratives are not simply stories. Everybody seems to have different narratives for the same places.

Their homes and the stories of those homes have become inseparable. Conflict often erupts in places with religious significance to multiple groups, such as the Ibrahimi Mosque in Hebron, tomb of Abraham and the site of many instances of violence between Jews and Muslims.

One of the primary issues facing Palestinians on a daily basis is lack of mobility, as they are forced to go through checkpoints to get to work or school. These restrictions were designed to limit contact between Palestinians and Israelis in the name of security.

We found that most Israelis’ only contact with Palestinians is through reports of extremist groups, and most Palestinians only experience the Israelis at checkpoints. Both groups have suffered loss at the hands of extremists. Limited contact also limits room for peace to grow.

Though we were not experts on the subject, we realized that we had more liberty than any of them in our ability as internationals to move freely through checkpoints and the more imperceptible barriers of religion and race.

On the first day of our hike on the Jesus Trail in the Galilee, our guide told us, “Your only assignment today is to behold.” We were there to behold, to bear witness, to listen. The object of the trip was not to come out with absolute truths, but to find the grey area, beyond binaries of good and evil. The grey area of no-man’s-land is where revolution, creativity and change occur.

A great example of this is people working to build social bridges between Israelis and Palestinians, like Rabbi Yudelman. He encourages positive connections between settlers and Palestinians through casual activities like soccer games for the children. His credo is, “Fear God, not the enemy.” If religion is at the root of the conflict, it can also be in the remedy.

Emily Hunsberger, 21, lives in Waterloo, Ont., and attends Shantz Mennonite Church, Baden. She is a fourth-year English Language and Literature student at the University of Waterloo.

See also “Christian reflections on balance and the Middle East.”

See other stories about the Yella tour experience:
Clarity and confusion in the Middle East
Marching to Zion
Swords and ploughshares
‘Let’s go’ to an amazing place 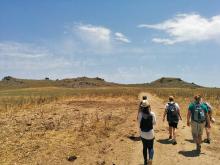 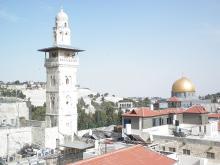