Despite warnings from Mennonite Central Committee (MCC), Low German Mennonites from drought-prone regions of northern Mexico have bought over 20,000 hectares of land in Colombia.

Kennert Giesbrecht, long-time editor of Die Mennonitische Post—a newspaper for Low German Mennonites throughout the Americas—notes the Liviney Colony and another 12,000-hectare parcel as two examples of land acquisitions. Another group is currently considering a 10,000-hectare plot. The lands are all in the Eastern Plains of Colombia, about 200 kilometres east of Bogotá.

Giesbrecht says houses and a school have been built, farm equipment has been bought, electricity has been brought in, and roughly 20 families have moved to Liviney. Reportedly, the crops have been a success, although significant fertilization was required.

The area “undoubtedly looks like the land of milk and honey,” says Bonnie Klassen, MCC’s area director for South America and Mexico. Klassen, who is based in Colombia, where she has lived for 20 years, says the area is lush and fertile.

The quest for free and fertile new lands is fundamental to the story of Low German Mennonites. Giesbrecht says that, over the last three decades, roughly 100 new colonies have been established in Latin America. A few years ago, colonies in Mexico and Bolivia even sent representatives to Russia, although he says nothing came of it.

Now, “Colombia fever,” as Giesbrecht calls it, has Mennonites from Bolivia to Alberta talking.

But Klassen has serious concerns, which Giesbrecht has given considerable play in the Post. Klassen says the “vast majority” of land in Colombia does not have clear legal title, and even where official documents exist, they may not stand up to legal challenges.

Colombia is emerging from five decades of armed conflict in which an estimated six- to eight-million hectares of land was taken from its rightful owners, according to government numbers. Klassen says that, in many cases, the new owners of this land will have received documentation of ownership either by coercing officials or by collaborating with unscrupulous ones. The area where Mennonites are buying was an area of considerable displacement.

The Colombian government is working to bring clarity and fairness to land rights, something that began even before the Peace Accords of last year. According to the country’s Law of Victims and Land Restitution, passed in 2011, if a landowner is found to have unknowingly obtained land that is rightfully someone else’s, that landowner is given replacement land elsewhere. If someone is found to have knowingly obtained land in an untoward fashion, the land is taken away with no compensation.

This means that if Mennonites were found to have acquired land that changed hands unlawfully at some point, the Mennonites would be given land elsewhere, but that could be scattered parcels for individual families instead of a single tract for a colony.

The law also means that people who knowingly obtained disputed land have reason to sell before their ownership is called into question. Such sellers would presumably welcome the prospect of unsuspecting foreign buyers.

While Klassen has no knowledge of Low German Mennonites having purchased disputed land, and is certainly not suggesting ill-intent on their part, she feels the risks are too high. She wonders about the possibility of questionable Colombian interests operating in the background.

About a year ago, Klassen met with a group of Low German Mennonites involved in acquiring land in Colombia. They had been given certain documents by their lawyers, but evidently not the certificate that can be obtained at no charge from the government that would certify that the land purchased was clear of dispute.

The Mennonite newcomers have also obtained correspondence from the Colombian government that they feel exempts them from military service, although Klassen found the letter obtuse and potentially misleading. Giesbrecht says he is somewhat surprised that these sorts of privileges seem less important to these settlers than they usually are for Low German Mennonites.

As for Colombian Mennonites, who are known in the country for their peace work, Klassen says there is some “uneasiness” that the purchase of large tracts of potentially disputed land by other Mennonites will send a mixed message about what Mennonites stand for.

Mennonites have a long history of moving to areas and unknowingly stepping into their questionable politico-historical dynamics.

Wilmar Harder, former head of MCC’s Low German program in Bolivia, notes that Mennonites have often settled areas recently cleared of other inhabitants, and Mennonite settlement has often served the politico-economic interests in their new countries. In the 1700s, Catherine the Great invited Mennonites to settle areas of Russia from which the Tatar people had been removed. In Manitoba, the government granted the “East Reserve” and “West Reserve” to us a few short years after Treaty 1 had cleared the legal path for settlement.

Harder cites further examples from Kansas and Minnesota, where Mennonites came in following the Indian Wars; the Paraguayan Chaco, where Mennonite settlers helped Paraguay solidify its border with Bolivia; Bolivia, where Mennonites helped settle newly cleared, politically significant lands as per the 1953 Agrarian Reform Law; and Mexico, where some large landowners, afraid of a changing government, were happy to unload their land holdings.

Harder, now a pastor in Buhler, Kan., implies no ill-intent on the part of Mennonites now or in the past; he only notes a pattern by which our restless eye for opportunity and godly sense of adventure have served interests beyond our own. 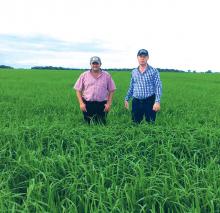 David Fehr, left, and Klaas Wall in the middle of a rice field not too far from Puerto Gaitán, Colombia. (Photo courtesy of Kennert Giesbrecht)

The yellow pin shows the location of a new Mexican Mennonite colony in Colombia. (Photo courtesy of Kennert Giesbrecht) 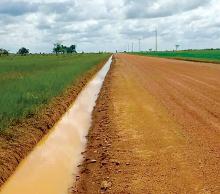 A new road and hydro line in the Liviney Colony. (Photo courtesy of Kennert Giesbrecht)

Thank you for this article. What are the odds that some of the land purchased by these Mennonites was at one time owned by Colombian Mennonites?