‘A picture of his grandmother’ 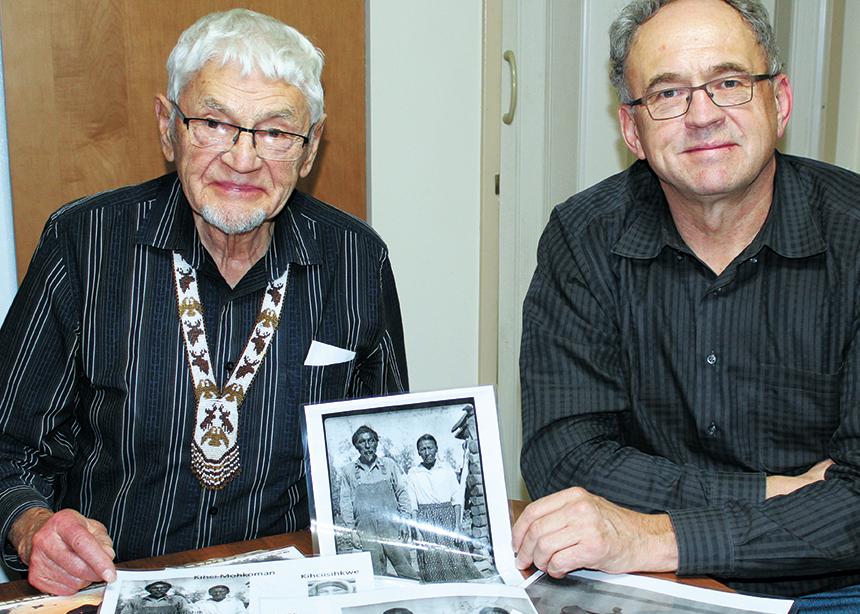 Their collection of about a thousand digitized pictures includes photographs from the University of Philadelphia archives that were taken in the summer of 1933 by Alfred Irving Hallowell, an American anthropologist.

“It is all about the kids,” explains Gerald. “We have the names and pictures of their relatives. It is their family lineage. Their forefathers walked the land before they were a twinkle in the eye.”

The Neufelds’ interest in sharing archival photographs started in Pauingassi, about 280 kilometres northeast of Winnipeg, on a warm sunny day in June 12 years ago, when students were more interested in spending the day outside than in Gerald’s workshop on employment opportunities and jobs.

Anticipating this might happen; Gerald had prepared a video of photographs that his father had taken in the 1950s and 1960s, when they lived in Pauingassi.

“They were mesmerized by that,” recalls Gerald. “Kids who weren’t interested in the ‘hot jobs’ video—which was a cool thing back then—were mesmerized by Dad’s pictures. They were asking, who is this, who is that? By the end of the class, I had more kids in my class than when I began.” Students had been surprised when he answered their questions in Ojibwe.

The Neufeld family’s close relationship with Pauingassi and other First Nation communities within the Berens River watershed goes back to the early 1950s, when Henry and his late wife, Elna, served as teachers in Moose Lake and Little Grand Rapids.

In 1955, they accepted an invitation to start a school and church in Pauingassi. “The elders said, ‘Come and set up your tent with us,’ and that’s what we did,” recalls Henry, 89. They moved to this isolated community with a young daughter and had four more children while living in Pauingassi.

The Neufeld family lived in the community for 15 years. With prayer and financial support from Mennonite churches in southern Manitoba, Henry bought a sawmill and helped the community build a school and church and upgrade their houses.

The family learned the Ojibwe language, developed close friendships and gained a greater understanding of the legacy of colonization. Since leaving Pauingassi in 1970, Henry has returned 176 times to the community. “I want to support and encourage them,” he says.

He now travels to Pauingassi and other communities in the heartland of the newest UNESCO World Heritage Site with Gerald. In 2018, they visited Pauingassi twice and also visited Pikangikum, Poplar Hill and Little Grand Rapids.

“Typically we go Monday and come back Friday,” says Gerald, an electrical engineer with Manitoba Hydro, who uses his vacations for these travels. “We have about 10 PowerPoint presentations in each community. We show the pictures in every classroom, and in the evenings in the community hall for adults.”

Henry begins these presentations with singing and drumming a song and an opening prayer. “Dad is a great travel companion. He brings magic to our presentations,” says Gerald.

They have given the band council, school and church in Pauingassi 360-page albums of some of the photographs that Henry had taken in the 1950s and 1960s. They have also shared archival photographs with the band councils, schools and churches in Little Grand Rapids, Poplar Hill and Pikangikum, and with individuals in the Berens River community.

Gerald says the archival photographs show that historically the communities within the Berens River watershed were one nation. The next step in this project is working with elders and school boards to increase awareness of the region’s oral history through displaying photographs in schools.

Interest in learning more about family histories and lineage is growing, as people become more aware that these photographs exist. “It is just mushrooming,” says Gerald.

A few weeks ago, at a meeting with elders in Winnipeg, Gerald met an elder from a community along the Berens River. He had asked the elder for the name of his parents. “When I heard the names, I asked him if he would be interested in seeing a picture of his grandmother. He couldn’t believe it that I had a picture of his grandmother. I gave him a memory stick of the pictures, so that he could take them home to his community.”

See more about Henry Neufeld’s involvement with indigenous communities at “From ‘never a teacher’ to ‘why not?’” 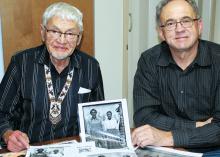 This is a wonderful project—very glad to see!

A couple of corrections: The photos are not housed in the University of Pennsylvania, but in the American Philosophical Society in Philadelphia, along with the rest of Hallowell's papers. (Credits for any reproductions of Hallowell's photos should also be given to the APS, which holds the rights.)

The photos were probably not all taken in 1933 on Hallowell's first visit to Pauingassi; he visited in other summers, so it may be best to say, "during his intermittent summer visits, 1933-1940."