Mennonites, medicine, and the body 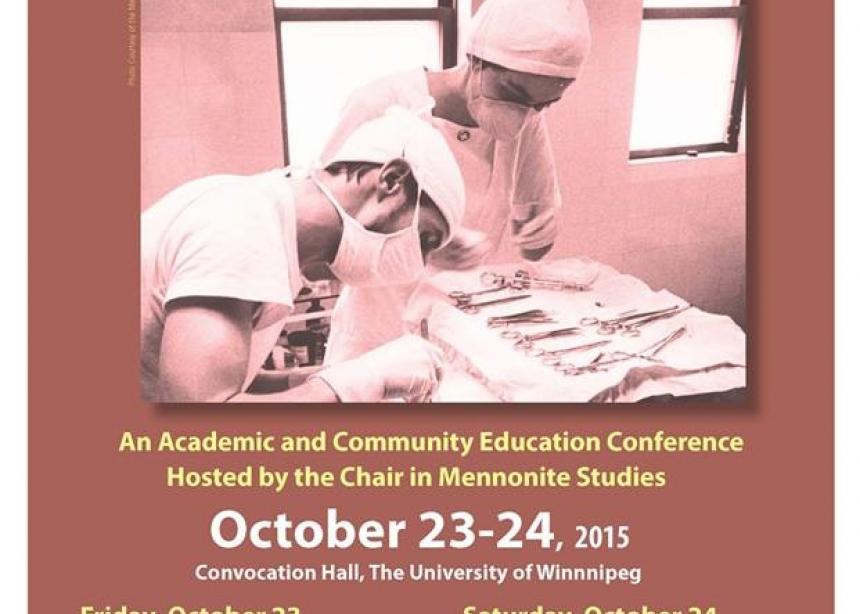 <p>The poster for the conference, “Mennonites, Medicine and the Body: Health, Illness and Medical Research in the Past and Present,” held at Canadian Mennonite University in October 2015.</p>

I had the privilege of participating in a conference this past weekend (Oct. 23, 24, 2015) at the University of Winnipeg hosted by Royden Loewen, the chair of Mennonite Studies. The theme was “Mennonites, Medicine, and the Body: Health, Illness and Medical Research in the Past and Present,” and it was a fascinating combination of medical, historical, literary, and theological perspectives.

The papers came together into three major topics for me, which I’ll share here:

Several presenters talked about the history of Mennonite folk medicine, a time when every village had its own midwife and bone-setter (presented by Vanessa Quiring, Jason Dyck, and Conrad Stoesz).

These midwives apparently had extensive knowledge of herbal medicines and/or homeopathy and were called upon to assist in childbirth, to provide herbal/homeopathic remedies for various ailments and illnesses, to provide birth control, and to be undertakers when there were deaths. When medicine began to be a licensed profession, these midwives were vilified and discredited by doctors, the majority of whom were men, whose methods were based on an entirely different, scientific understanding of the body and of childbirth.

It was interesting to see parallels drawn to Ojibwa/Anishinabe medicine people and their traditions of folk/herbal medicine (presented by David Daniels), to glimpse the seamy underside of the so-called Golden Age of Mennonite prosperity in Russia through a 19th-century health treatise aimed at correcting terrible eating and hygiene habits (presenter Marlene Epp’s “‘Eat less pork, take more baths’”), and to hear about a resurgence of respect for folk medicine and attempts to integrate it with Western medicine today (presenters Jim Pankratz and present-day Mennonite midwife Kellie Thiessen).

A related theme was attitudes toward suffering and illness in various historical periods and among various streams of Anabaptists/Mennonites (Old Order, Kleinegemeinde, etc.). This ranged from Rudy Wiebe’s depiction of his sister’s illness in his autobiographical Of This Earth, in which he includes excerpts from her diary, possibly an attempt to render a seemingly arbitrary experience meaningful (presenter Jesse Hutchison); discussions of Mennonite Gelassenheit or yielding acceptance of suffering and illness as part of a fatalistic understanding of suffering and death as God’s will (presenters Rebecca Plett, Ralph Friesen, Katharine Enns); to the use of high-tech medical research and testing to trace genetic disorders in different Anabaptist communities, including Amish and other “low-tech” groups (presenters Kathryn Fisher, Marlis Schroeder, Victoria Mok Siu and Jane Leach, Judith Kulig and Ling Ling, Matthew Farrer, Cheryl Rockman-Greenberg).

In all of these, there was a kind of negotiation between the secular medical narratives surrounding illness and interventions/treatments which “cure” it and faith-based understandings of how God is present in illness and death. These approaches yield completely different understandings of the significance surrounding illness, and again, I find the combinations between the two to be the most intriguing, as that’s arguably where most present-day Anabaptists find themselves.

While it can be seen as part of the Christian calling to contribute to the treatment of illnesses and healing of minds, bodies, and relationships, it’s also important to know that when medicine fails us, God is still present with us. While suffering is not redemptive in and of itself, we are called to be present with each other in suffering and death. Ben Goosen’s paper on how Mennonites benefited from Nazi categories of race and German “purity” can be seen as a stark reminder that despite their claims to objectivity, scientific/medical perspectives are also constructed and based on assumptions that sometimes demand to be questioned and critiqued.

Finally, we heard about how the Mennonite emphasis on the communal body of the church over individual bodies, especially women’s bodies, has been harmful. Historian Rachel Waltner Goosen talked about the devastating history of Mennonite theologian John Howard Yoder’s sexual abuse of approximately 100 female students, the way Mennonite church and seminary leaders covered it up for several decades rather than risk upsetting the church with this knowledge, and the struggle these women endured to have the abuse recognized and to hold Yoder accountable for his actions. In her words, “the survival of the church was seen as more important than justice for the victims,” a situation which is slowly changing as, all these years later, Mennonite Church USA and Anabaptist Mennonite Biblical Seminary try to apologize for this profound failure.

My own paper also discussed women’s bodies and about how a neglect of Mary, the mother of Jesus, has left women with no affirmation of their embodied experiences of faith, motherhood, and peacemaking. I explored the risks of gender essentialism and segregation represented by the history of Mary, but also the possibilities a biblical-historical Mary offers to affirm aspects of women’s embodied faith.

My paper shows the contradiction in the historical Mennonite valuing of family and emphasis on women’s motherhood but the lack of public/communal acknowledgement of these things (for instance, we have no theological or worship language to prepare women for childbirth or celebrate this deeply meaningful aspect of many women’s lives). This points to the need to reexamine the supposedly egalitarian aspects of Mennonite theology (priesthood of all believers, hermeneutic community, discipleship ecclesiology), making sure they don’t simply universalize the male experience, but that we really reflect all of the particular bodies which comprise the one Body of Christ, the church.