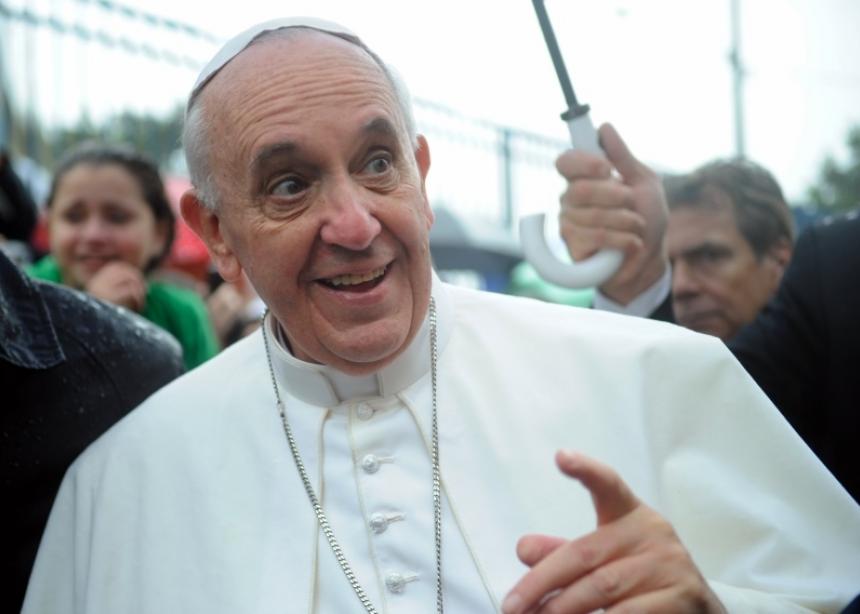 <p>Pope Francis on his 2013 visit to Brazil. (Photo by Agencia Brasil, from Wikimedia Commons.)&nbsp;</p>

Even aside from his various provocative quotes and actions, his identity itself breaks the pattern set by previous popes: “he is the first Latin American pope [Argentinian, but of Italian heritage], the first Jesuit pope, the first in more than a thousand years not to have been born in Europe, and the first to take the moniker Francis, in honor of St. Francis of Assisi, champion of the poor” (whom I discussed in my previous blog post).

The article reminded me of many of the reasons Pope Francis has been branded a radical. True to his namesake, he has eschewed many of the luxuries that previous popes have enjoyed, preferring to live almost as simply as he did as a priest in Argentina, where he rode the subway like everyone else. As pope, Francis has opted for simple white clothing rather than the traditional embroidered red papal cape and stole, he has avoided private limousines, removed the bulletproof glass from the “popemobile,” and refused to move into the Apostolic Palace; instead, he lives in an apartment in a Vatican guesthouse.

From the beginning, Pope Francis has also been clear about the direction in which he wants to lead the Catholic Church: “How I would like a church that is poor and for the poor,” he said at his first international press conference. He’s expressed this in meaningful symbolic acts, such as his first Holy/Maundy Thursday service, at which he replaced the custom of the pope washing priests’ feet with the foot-washing of young offenders at a prison (including Muslims and women). His statements against homophobia (when asked about gay priests, he said, “Who am I to judge?”), in support of single mothers[2] and of marital separation in some cases,[3] and his defense of creation or the environment,[4] are all profoundly positive and somehow unexpected. He’s even considering “the possibility of removing celibacy as a requirement for priests.”

People are speaking about Francis giving the Catholic Church—or even Christianity or religion in general!—a good name, and renewing its reputation among believers and non-believers alike. People no longer dismiss the Catholic Church as an institution which primarily condemns same-sex marriage and contraception; instead, people now say, “Oh, the pope, he’s the guy who loves the poor and doesn’t live in a palace.” That, I must admit, is a remarkable reversal.

But as much as he may shock those who expect a certain traditionalism from the Catholic Church, there are other ways in which Francis is not really that radical at all. The article speaks about his actions as actually fairly middle-of-the road—he’s trying to appeal to “conservative” and “liberal” Catholics, and everyone in between.

So, even though he’s spoken against homophobia, he’s also spoken against same-sex marriage. He’s taken some action against clergy sexual abuse, but perhaps not enough. Even though he’s Latin American and pledges allegiance to the poor, he doesn’t ally himself with liberation theology. He’s also been criticized for doing too little to overtly resist the dictatorship in his native Argentina, though he has spoken about doing a lot behind the scenes at that time.[5] And, I would add, though he’s spoken positively about women (and I quote: “Women in the church are more important than bishops and priests.”),[6] he hasn’t mentioned any support for their ordination—in other words, he doesn’t think women should actually be bishops or priests!

Maybe Pope Francis seems more radical than he is in comparison to his staunchly conservative predecessor, Pope Benedict, who as a young Cardinal Ratzinger, openly criticized and censured prominent liberation theologian Leonardo Boff and expelled mystical and ecological theologian Matthew Fox from the Dominican order. (I’ve read books by both of them. There is nothing “heretical” or worthy of punishment there!)

There was a certain unwavering harshness to Benedict’s defense of traditional Catholic doctrines concerning birth control, sexual orientation, and even interdenominational and interreligious dialogue.[7] Francis is seen as much warmer and gentler than his predecessor, stressing pastoral care rather than enforcing “correct” beliefs and doctrines. So even if he won’t be majorly overhauling Catholic doctrine, he’s at least changing the way the church conceives of its role, which may lead to other, more sweeping changes.

As one of his friends put it to National Geographic, “He won’t change doctrine. . . . What he will do is return the church to its true doctrine, the one it has forgotten, the one that puts [humanity] back in the center. For too long, the church put sin in the center. By putting the suffering of [humanity], and [its] relationship with God, back in the center, these harsh attitudes toward homosexuality, divorce, and other things will start to change.” And in the end, maybe that’s nothing to scoff at.

So what does this have to do with the Anabaptist-Mennonite church, which, admittedly, split off from Catholicism around 500 years ago?

Well, I think the dynamics surrounding Pope Francis can be instructive for a tradition which is considered radical by virtue of its very identity (since the Anabaptist-Mennonite tradition arose during the Radical Reformation).

So I’ll leave you with these questions: In what ways do we as a Mennonite church embody and practice the radicality to which our faith and tradition call us? In what ways do we fall short of it? In what ways is reformation/renewal an ongoing process rather than a one-time event? And, how can we live into Francis’s statement that “God is not afraid of new things”?

[1] You can read it here: http://ngm.nationalgeographic.com/2015/08/vatican/draper-text

[7] You can find more sources on Ratzinger here: https://en.wikipedia.org/wiki/Pope_Benedict_XVI 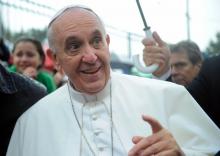