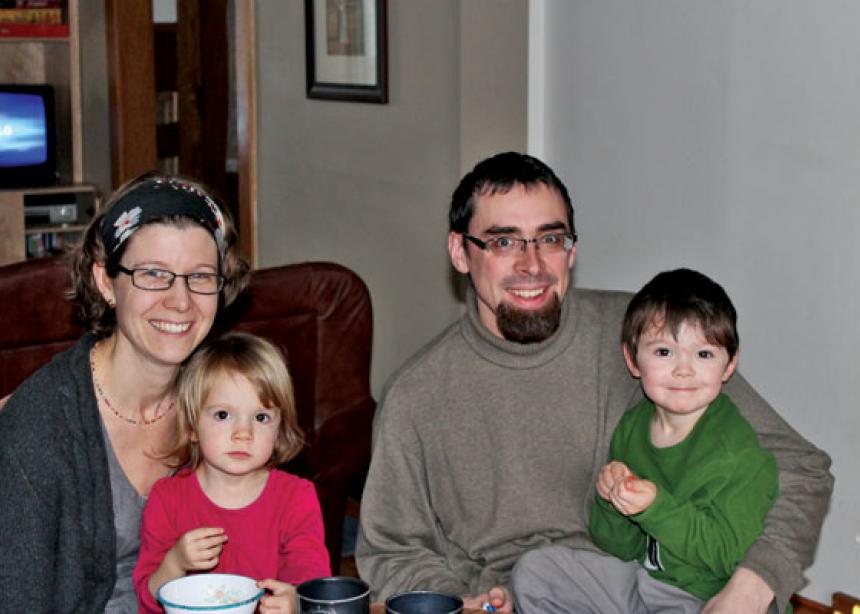 When Barrette and Sandy Wiebe Plett returned from Egypt in 2008 after a three-year assignment under Mennonite Central Committee, they tried to move back into the church life they had left behind. But it wasn’t the same. They had changed. Their family now included two preschool children. The small group and close friends that were so much a part of their church life before were no longer there and their own spiritual needs had changed. “Without really being aware of it, we had actually lost some maturity faith-wise. We needed more basic spiritual fare,” said Barrette.

In January 2011 they began to search for a place that would address their spiritual need. Their search involved attending different churches and many conversations with friends and other seekers. They heard from friends and acquaintances who said, “I took a break from church and found I didn’t miss it.” Or, “I found other ways to meet my spiritual need.” The Wiebe Pletts were reluctant to leave their Mennonite Church Manitoba affiliation and approached Norm Voth, director of Service and Evangelism for MC Manitoba. Was there a place within MC Manitoba that offered an alternative style of worship, they wanted to know.

As they drove home from working at Camp Koinonia this past summer, they asked each other whether it would be possible to bring the passion of worship that they experienced at camp to the city. When they shared some of their ideas with Darryl Neustaedter Barg, associate director of communications for MC Manitoba, they discovered that he and his wife, Krista, had been thinking along similar lines. Together they discussed and prayed about how to follow their nudgings. “It felt like it was not just a coincidence that Darryl had a similar nudging,” said Sandy. They discovered the R.A. Steen Community Centre in central Winnipeg was available as a meeting place and offered space for child care as well. “Once we dropped off the rental deposit we realized that something was actually starting. So we went and bought some coffee mugs.”

“We don’t feel we are being asked to start a church plant but from the beginning we have felt a nudging to try something and see what happens,” said Barrette. “We meet every other Sunday evening. Last September we booked the space for six times and decided to wait and see if there are people coming and if God is blessing this and if we should continue. It has been an exercise in trust.”

Simple Church offers an alternate Mennonite worship experience. About 45 minutes are spent singing, mostly camp-style songs but also traditional or re-arranged hymns and more contemporary Christian tunes. This is followed by a sermon. Barrette is reluctant to use the word sermon. “It isn’t that formal, more of a prelude to conversation—provide some teaching but also open the doors to some conversation. It aims to have tangible questions and challenges for worshipers at all stages, from nonbelievers to new believers to solid and secure followers of Jesus to people with serious doubts and questions. One of the goals is to always leave worship with a question or a task that pushes us in our faith during the next week.” The sermon is followed by a time of discussion.

Simple Church’s website states that their theology is rooted in the Anabaptist/Mennonite theology as described in the Confession of Faith in a Mennonite Perspective. Although they have chosen to call the gathering ‘Simple Church,’ “we do recognize that theology can be anything but simple,” said Barrette. “Why else are there so many Christian denominations? Our hope is to invite people to take simple, tangible steps to following Jesus more closely.”

Averaging about 25 people on a Sunday evening, they decided to renew their lease until April. “It is not the same regular 25. Sometimes they are altogether different people. I think people of our generation are less likely to commit to any institution. The nature of commitment is different. That’s a broader societal shift that doesn’t affect just the churches. People’s allegiances are weaker.”

Their worship services this winter focus on the book unChristian, which looks at the perceptions non-Christians have of Christians. “It provides us with some very good topics. We have asked five different pastors to help us address each of the issues. Four of those pastors are from MC Manitoba,” said Barrette. “The Mennonite Church denominational link is important to us. We appreciate the support and assistance they are providing.”

“This is what we feel God is calling us to do at this time. We won’t feel it is a failure if it doesn’t last. We just pray that whoever comes will have some meaningful connection to God and other believers.”

--Update, Dec. 18, 2014: Simple Church is presently on hiatus as Barrette and Sandy are spending the year out of province for graduate studies. The group has transitioned away from the web page to a Facebook page.

I am wondering if this church is still alive and well. The concept of this church struck a cord with me and my husband. Do you have anyinfomation about this church or any other church run along similar lines? Tara

The "Simple" church sounded very interesting. I, too was wondering if you know of similar churches or home churches that are meeting in south Winnipeg?