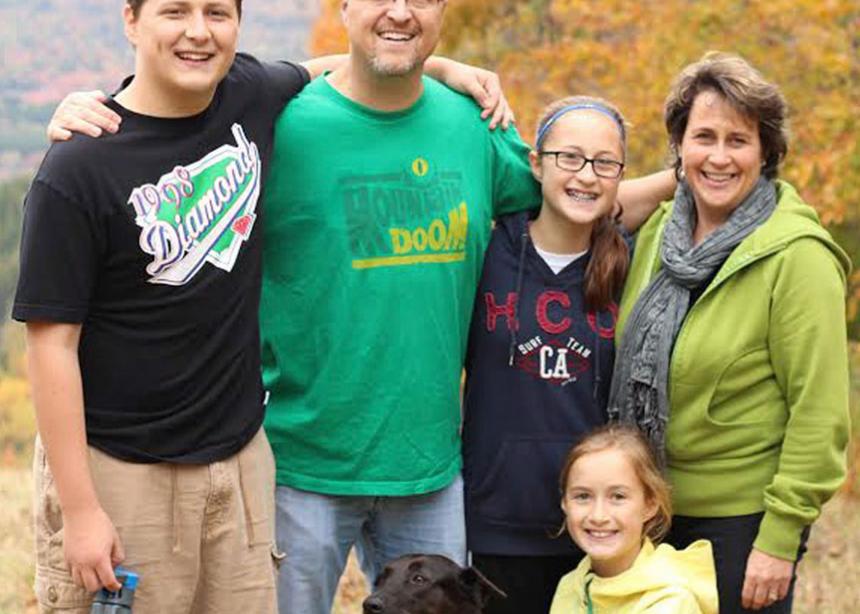 Paula Weaver had to take a moment to let a substantial blessing sink in. The 1988 social work graduate of Eastern Mennonite University (EMU), Harrisonburg, Va., had just heard that her agency was the winner of the top award from a local organization called 100 Women Who Care.

Weaver’s non-profit organization, Archway Counselling Association, received $17,300 during the awards event in Truro, N.S., on Dec. 2, 2014. Weaver is a therapist there and Brian Schrock, her husband and a fellow 1988 EMU social work grad, is the executive director.

At the presentation, more than 400 women from Truro and the surrounding Colchester County heard Weaver describe the work of her agency, which offers professional counselling for families, couples and individuals at reduced and affordable prices. It also offers a drop-in centre for youth, called Slate.

The agency, founded by local citizens 21 years ago, now employs eight staff and has two satellite offices. They receive referrals from physicians, schools, clergy, the government’s Victim Services and Children’s Aid, and others. Weaver and Schrock were hired to help with the start-up.

“None of us go through life unfazed,” Weaver told the women. “We all have, or will have, to deal with something. Often these moments catch us off guard. To have a safe place to land is almost always imperative in surviving and in regaining our solid footing.”

At the end of her speech, Weaver read from a letter Archway Counselling had received the day before: “Without Archway and the option of reduced rates, I wouldn’t have been able to get the help I needed. You have given me life skills that I needed and the confidence to lead a fuller, happier life.”

Weaver and Schrock dated their senior year at EMU, but went their separate ways after graduation. Schrock and a friend rode their bicycles all the way home to Colorado. Weaver and a friend drove to Boston to find jobs in social work.

“My first job was doing child-protection work in a tough part of the city,” said Weaver.In 1990, she went to Smith College in Northampton, Mass., to earn a master’s degree in clinical social work. After graduation, she and Schrock married and moved to Philadelphia, where he enrolled in a master of social work program at Bryn Mawr College.

When he finished, the couple decided to take a volunteer assignment somewhere in the world. Mennonite Central Committee (MCC) had an opening in Nova Scotia, where a board had been organized to establish a counselling centre that would be affordable and accessible to all. They were looking for therapists and a director.

“I’m embarrassed to say that we had to look up Nova Scotia on the map,” Weaver said, “to confirm where we thought it was—above Maine, in Canada.”

The couple helped get the centre up and running. When their two-year MCC term ended, they extended it for six months and then another six months.

“We joke that this was our Gilligan’s Island,” Weaver said, referring to a TV comedy that appeared in the late 1960s. Two decades after their first two-year stint, they are still there.

Weaver and Schrock sometimes talk about returning to the U.S. “I look up real estate listings in our home states of Colorado and Pennsylvania,” Weaver said. They now have three children—aged 15, 13 and 11—who consider themselves Canadian. When the family watches the Olympics or World Cup soccer, the parents cheer for the U.S. and the children for Canada.

“Nova Scotia is beautiful, and I have become quite attached to the sight and sound of the ocean, along with the wonderful landscape of trees and rocks,” said Weaver. “I take for granted whale and moose sightings.” 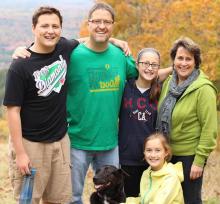 I have such huge respect for these two people. Just one year after they took the chance to come to an unknown place and work among strangers, I was divinely led to what was then called Christian Counselling Ministries, now called Archway Counselling. I believe they were appointed by God for the positions and that through them MANY lives have been changed in marvelous ways. I am still a client and so blessed that Brian and Paula have not left. My story is sad and long, but having Christian counselling is helping me find God's love for me and his power to help me overcome the challenges of my brokenness.

I don't think there are words enough to describe the overwhelming gratitude and respect I hold for this couple! They are true disciples of Christ, on mission here in N.S., Canada, and living examples of how we are called to heal the sick and love the unlovable. I would not be here if not for the affordable (yet priceless) and truth-centeredness of this counselling service. I'm so thankful for Brian and Paula for following God's leading to leave their home, family and friends and come to this little piece of God's world to show others the Way.