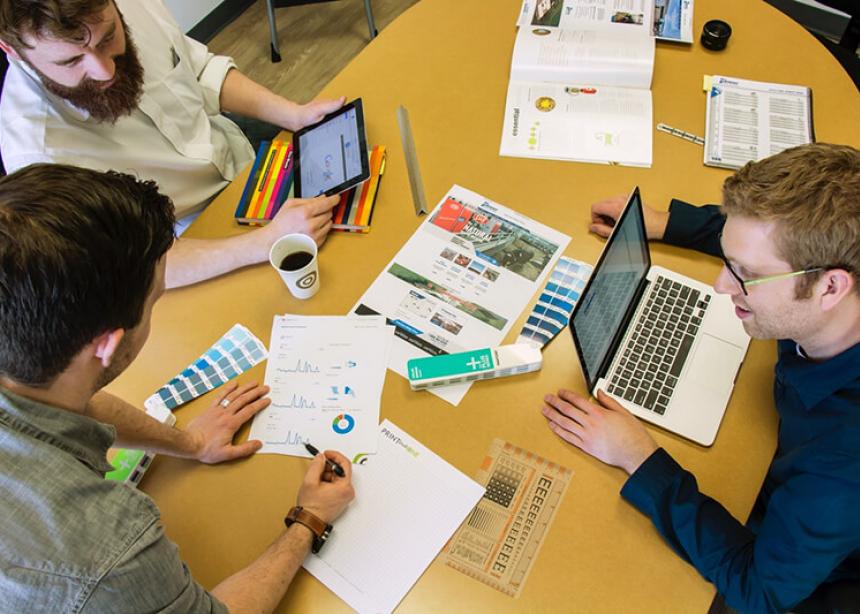 Matthew Penner loves airports. Sometimes he rides his bicycle to the airport in Steinbach and simply sits next to the runway. “I would call it a sacred place for me to go and experience God’s closeness,” he says.

Penner, a pilot and a 29-year-old entrepreneur who founded his own marketing company called Three Six North, was recently among 20 young professionals honoured by the business-focused development organization Mennonite Economic Development Associates (MEDA).

“What we’re looking for when we select the 20 under 35 award winners is a commitment to faith, service and entrepreneurial spirit,” says MEDA’s Ethan Eschbach. “We really believe that Matt exhibits all of those.”

Penner has been pursuing his passions—business and flying—ever since he set up his first lemonade stand as a child. He earned his pilot’s license when he was 15. The first time he flew solo his mother had to drop him off at the airport because he was too young to drive a car.

Penner studied commerce in university, graduating from the University of Manitoba’s Asper School of Business with honours. After that he worked for a few different companies before he decided to strike out on his own.

Airplanes played a role in his decision. At the time, he was working as a marketing manager for Price Industries in Winnipeg. One day he volunteered as a pilot with a non-profit organization called Women in Aviation for an event aimed at encouraging women to get into flying. All day Penner made short flights, taking women up in the air. It was so much fun, he decided then and there to quit his job and do his own thing.

The next morning he walked into his boss’s office and gave notice. “I wouldn’t say I’m spontaneous, I’m more of a planner, so it was uncharacteristic of me,” says Penner.

He named his company Three Six North after the point on a compass. Penner began taking on local clients, helping small businesses to sharpen their marketing plans and develop websites. Eventually he merged his business with his parents’ company, a print shop called Print Studio One. The marketing and printing businesses are now part of the same company, but each maintains its own brand.

Working with clients at Three Six North allows Penner to flex his creative muscles. And sometimes he gets to fly. Last year he took a series of aerial photos for a company that builds barns.

Running his own company is also a way for Penner to give back to his community. He and his wife, Lindsey Banman, live in Steinbach and attend Steinbach Mennonite Church and Grace Mennonite Church. Penner’s company supports several charities and he sits on the boards of Steinbach Flying Club, Steinbach Family Resource Centre, Mission in Aviation Fellowship Canada and the Steinbach Chamber of Commerce.

“I see business as much more than making a profit,” says Penner. “Profit is like air, you need air to live, but you don’t live just to breathe air. We need to sustain ourselves and build a foundation, but it’s really about the community and giving back in different ways.”

Penner says he strives to balance the financial, social, environmental and spiritual aspects of his work. His company uses vegetable-based inks and recycled paper to reduce its environmental footprint. Recently one of Penner’s co-workers characterized the company as a family. “That was very touching—that we’d created more than just an organizational culture, we’d created a family that cares for each other in deeper ways,” he says.

Read about another 20 under 35 award winner: “MEDA honouree formed by faith, for service.”