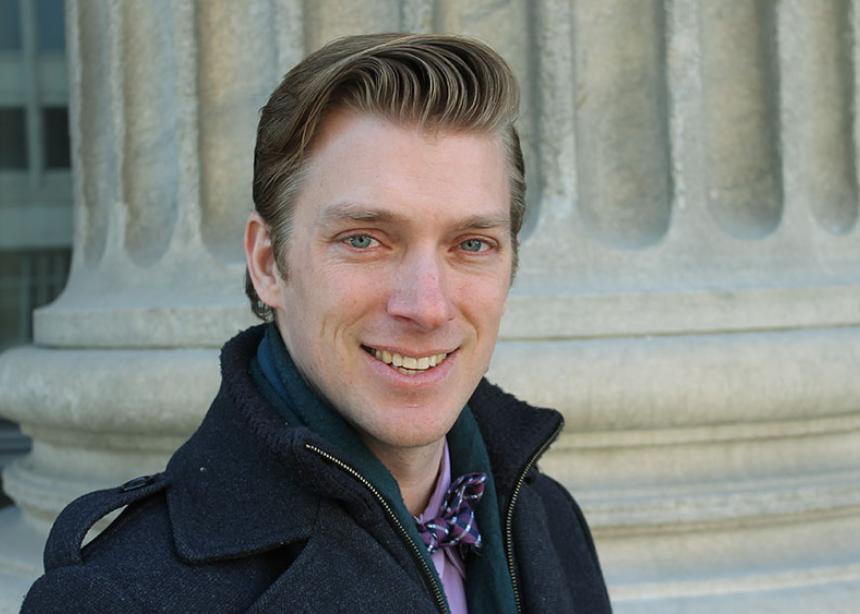 Orlando Braun has always been fascinated by filmmaking. He recalls being a child and making detective films with his father’s camcorder, but never thought he could one day make a living making movies.

“It didn’t even occur to me this is what people do as a job,” the 33-year-old Winnipegger says.

Following high school, Braun enrolled at the University of Manitoba to study architecture. After discovering it wouldn’t be a good fit, he dropped those classes and picked up film and drama ones instead.

It was a wise move. After completing a bachelor of arts degree in film, he earned a master of fine arts degree in producing from the New York Film Academy at Universal Studios in California. He has worked in Los Angeles and New York, and completed a half-dozen short films.

In 2013, he partnered with long-time friend Jorge Requena to create Prairie Boy Productions, which aims to create “high-quality, strong and wholesome stories for film, TV and other multimedia platforms.” Last year, the duo finished their first production, a 30-minute documentary about hip-hop culture in Winnipeg called Graffiti Stories.

For their latest project, they turned to Braun’s Mennonite background for inspiration. Currently in production, That Mennonite Joke is a 30-minute “docu-comedy” that Braun is directing and Requena is producing. The film explores the roots of Mennonite humour in North and South America, and what that humour says about Mennonites. It also focusses on Plautdietsch—Low German—and the way that language is used by many to comedic effect.

Braun was born in Paraguay and moved to Winnipeg with his family when he was 5. Growing up, humour was always a big part of the interactions he had with members of his immediate and extended family. At the same time, the stereotype of Mennonites is that they are stiff, humourless farmers who ride horses and buggies.

“Mennonite humour is something no one ever talks about,” Braun says. “Yet it was intrinsic to my upbringing.”

The film follows Manitoba-born Mennonite comedian Matt Falk as he interviews other Mennonite entertainers like 3molPlaut, a comedic musical trio with four albums of music sung in Low German; Corny Rempel, a radio host by day and Elvis impersonator by night; and acclaimed writers like Armin Wiebe and Miriam Toews.

Braun says that after being exposed to Falk’s work, approaching the comedian to star in the documentary was a no-brainer.

Falk, who placed second in the World Series of Comedy in Las Vegas in 2010, has dealt with his Mennonite upbringing in his material before. When Braun approached him about being in the documentary, Falk was at a point in his career where he was looking to increase the amount of Mennonite material in his act, after receiving encouragement to do so from a handful of people, including Rob Schneider, a veteran stand-up comedian and former Saturday Night Live cast member.

“I’m really excited about this film because, throughout the course of it I’ve learned so much about my culture and I’ve gotten so passionate about it and so excited about it,” says Falk, 25. “I understand the humour in [North American Mennonite] culture so much more.”

Falk, who has a new comedy special coming out later this year, adds that what he is learning as the documentary films is impacting his act. “It’s already started to transform not just the way I’ve been thinking about my heritage, but the way I talk about my heritage, the way I write jokes, how deep I delve into some of these characters, and how universal these characters are, and how to put a spin on them,” he says.

The filmmakers believe the documentary will help non-Mennonites understand Mennonite culture, while, at the same time, hopefully teaching Mennonites who watch the film something about themselves.

Interest in the film is already spreading. This past July, Braun and Requena won $20,000 in a pitch competition at the Gimli (Man.) Film Festival to help make the film. BravoFACT, a foundation that assists Canadian talent, also gave the duo a BravoFACTUAL award that is helping fund the project.

Braun says that even without the funding he and Requena have been awarded, he would have found a way to make That Mennonite Joke. “The more I work on the film, the more I realize it’s a story that has to be told,” he says.

For more information about That Mennonite Joke, visit www.prairieboyproductions.com.