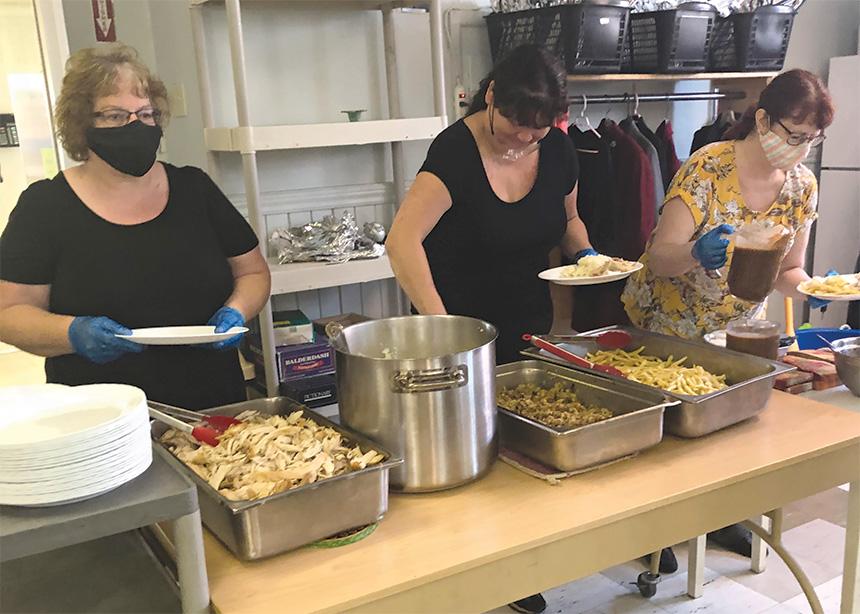 The staff of Westview Centre4Women prepares a meal in the Centre’s kitchen. (Photo by Jane LaVacca)

Jane LaVacca, the executive director of Westview Centre4Women in St. Catharines, credits her listening ear for the latest project being built at the centre. In listening to the women who gather there, she heard that one of the biggest concerns these mothers had was the lack of a licensed daycare closeby.

A child-minding program was already operating at the centre, but these women had to take a bus, or two, to take their younger children to a daycare. Older children attended the local public school. A licensed daycare was not available in their Queenston Street neighbourhood. It would be an easy transition to go from the child-minding program to a daycare, if there was one available in the same building.

In a conversation with a potential donor, LaVacca was asked what dream she had for the centre. “We need a licensed daycare centre in the area, so that mothers can go to work, knowing their children are safe, and well looked after,” she replied. “They will pay an affordable amount, whatever they can, for this service.”

At the end of that conversation, a hefty donation was given for the start of the project. With additional donations, the dream materialized, and the daycare is being built in the sanctuary of Westview Christian Fellowship.

The balcony is being renovated for church offices, and the sanctuary space will be used for the daycare. Since the church uses chairs instead of pews, the chairs can be set out on Sunday mornings for the service. A grand opening is planned for September, which coincides with the centre’s 15th anniversary.

In the 14 years that LaVacca has been at the centre, a number of other dreams have been realized. Shower stalls were constructed, a laundry service was set up with a washer/dryer that has a feature that kills bed bugs. A new kitchen was built, a pantry was added and new windows were installed.

The showers are being used by those who only have a room to live in, and not their own apartment. Many don't have the money to use the washers and dryers in their buildings, if there are any.

The kitchen now serves breakfast and lunch. Breakfast consists of an egg; an English muffin; yogurt; a piece of fruit; and coffee, tea or juice. Lunch can be hamburgers, quiche or sandwiches served with a salad. The cook works closely with the public health department to set up the menus.

The pantry is much larger now, able to store the basics as well as refrigerate meat, eggs and milk. Local farmers donate eggs, meat and vegetables, and women can acquire food items for a suggested donation. The women often support each other when one of them doesn't have enough money.

At Westview Centre4Women, most of the hired staff work part-time. The janitor was hired by the church to clean three times a week. The centre has hired an extra cleaner, who comes in every morning to disinfect everything. The cook works from recipes that feed 100 people. With so many meals prepared daily, a person was hired to operate the dishwasher.

A pandemic support worker monitors the outside distancing and makes sure COVID-19 protocols are followed, even now with the restraints easing up. Part of this person’s job includes talking to people while they are waiting in line and the support worker having a listening ear.

The program director works with individual job coaching, and teaches some classes, including crafts, which are sold at local venues. A hairdresser and manicurist are on staff. A licensed daycare worker will be hired.

At the beginning of the pandemic, the centre was the only agency that stayed open in the area. When no one was allowed to come into the building for a meal, it was allowed to serve sandwich lunches through a window. At one time, 500 sandwiches were served weekly.

When vaccines for COVID-19 became available, the church sanctuary was used by public health to administer the shots.

Most pre-pandemic clients have returned to the centre, although a few did not make it through the harsh winter. New clients now include people who have lost jobs or housing during the pandemic. They come a few times until they can get on their feet again.

Some funding has been lost over the past couple of years, and material donations are not coming in at the same rate as they did pre-pandemic. But a greater challenge is the spiralling increase in prices for groceries and other amenities.

One well-known charity regularly donates boxes of supplies to help people set up an apartment; but towels, sheets and other linens are in short supply; and hygiene supplies and cleaning kits are always needed, along with dishes, household items, and women’s and children’s' clothing. And, of course, the Westview Centre4Women always welcomes financial support. 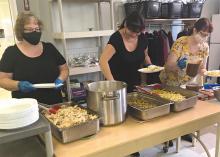 The staff of Westview Centre4Women prepares a meal in the Centre’s kitchen. (Photo by Jane LaVacca) 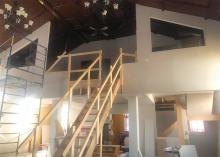 The balcony is being renovated into offices at the Westview Centre4Women. (Photo by Jane LaVacca)

This is a wonderful story about a wonderful group of people and variety of services. Thank you!