Walking with God and each other 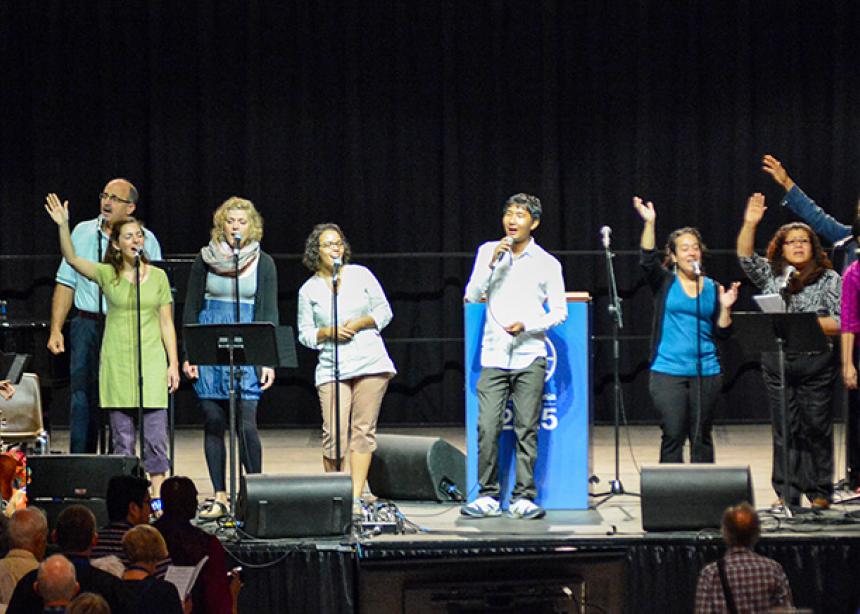 In his friendship group at the Mennonite World Conference assembly, Francis Ojwang found that getting to know fellow believers from distant places brought an unexpected blessing.

The Kenyan pastor had hoped that his wife, Everline Achieng, could travel with him to the 16th global assembly of Anabaptists. The once-every-six-years event drew more than 7,500 people from 65 countries to the Farm Show Complex in Harrisburg, Pa., from July 21-26. The theme was “Walking with God.” It was the first time since 1978 that U.S. churches hosted the global assembly. But, like about 300 others from various countries, Ojwang’s wife’s visa was denied. The couple had spent more than $1,000 on expenses such as visa interviews and passports—and half of it had been for nothing.

“I was disappointed, but not to the breaking point, because I believe all things work to good for those who love the Lord,” Ojwang said July 25. He shared his story with friendship group No. 348—one of more than 250 circles of about 10 people each that met for 45 minutes after each morning worship service.

The rest of Ojwang’s group, all from the United States, took up a collection. At their last meeting, they gave the father of six an envelope containing enough cash to cover a significant part of his loss.

“This is a great surprise and blessing,” he said. “Now I will be able to buy a couple of books and a t-shirt for my wife.”

He could do more than that. Not knowing how much was in the envelope, he promised some of the funds would help the orphans who make up about half of the 120 children in his congregation’s Sunday school.

Before the gift, he had $5 in his pocket. Appropriately, the day’s theme was “Walking in Receiving and Giving.”

Friendship group No. 348’s experience of cross-cultural sharing was one of countless moments—worshiping with the multitude, listening to music in the Global Church Village, competing for the Anabaptist World Cup or visiting in the hallways—that drew Anabaptists from around the world into closer fellowship.

“The church will test our faith. After all, you and I are in it,” Tom Yoder Neufeld of Canada said in a July 22 sermon. “But the church is also God’s gift of us walking together.”

With colourful MWC banners hanging on each side of the stage and a huge video screen behind the podium, worshipers gathered in a 1930s-vintage arena that hosts events such as rodeos, tractor pulls, motorcycle races and farm shows.

Howard Good, national coordinator for the assembly, said planners wondered, “Would attendees be OK with the occasional farm smell? I grew up on a farm, so I’ve enjoyed that.”

The assembly rented 30 large tents to create more space for smaller meetings, such as afternoon workshops, within the complex. Volunteers sped to their errands on big-wheeled Amish-made scooters that resemble bicycles.

Each evening worship service featured songs from various countries and cultures. On July 22 the crowd sang consecutive songs from Korea and India, the latter with Hindi words, but both with one word in common: “Hallelujah!”

On the day that featured Europe, a string ensemble played while the crowd sang “Jesu, Joy of Man’s Desiring.” American folk songs like “Down by the Riverside” enlivened the closing service, which became a clap-along hoedown, with a few worshipers dancing in the aisles, during “I’ll Fly Away.”

“The spirit touches our hearts as we sing together, as our brothers and sisters sing in different parts of the world,” said worship leader Don McNiven of Canada.

Music wasn’t limited to worship services. For Benjamin Krauss of Germany, hymn singing created a meaningful moment during the Global Youth Summit, a three-day pre-assembly event that drew more than 400 young adults from around the world.

He said the North Americans formed a circle around the other participants and sang “Praise God from Whom All Blessings Flow,” known by its Mennonite Hymnal number, “606.” Then the entire group sang together. To Krauss, the hymn singing was a way the North Americans “blessed us as their guests.”

“It’s a culturally specific thing,” he said. “You are very good at four-part harmony singing. It is very Mennonite for North Americans, but it is very North American for us from other parts of the world.

“It was a way of speaking your truth without excluding other truths. We experienced our differences and also found what we have in common.”

Kevin Ressler, the young North American speaker, said “many of us have become Pharisees” eager to condemn the sins of others while ignoring our own. With a Tanzanian mother and an American father, Ressler called himself a “Suba-Luo-Swiss-German-Tanzanian-American-Anabaptist-Mennonite.”

“Yet I am ethnically Mennonite on both sides,” he said. As one who considers Anabaptism his core identity, he said, “I am unicultural. . . . We are all ethnically Anabaptist, for we carry that version of Christ with us wherever we go.”

“Through MWC, we have a forum to fellowship,” she said. “It is not a time for us to be critical of or distance ourselves from one another.”

Bruxy Cavey, a Canadian Brethren in Christ pastor, praised Anabaptists for carrying the simple, clear message of Jesus through the centuries: that love for others is an essential reflection of love for God.

“We are a peace church because we are first and foremost a Jesus church,” he said.

Workshops included testimonies about living out the Anabaptist principles of peace and community in diverse contexts.

In Indonesia, with the world’s largest Muslim population, Mennonites face the challenge of building a positive image of Christianity among people who distrust it as a “foreign faith.”

“We live among 150 million Muslims, and they don’t want to read the gospel, so we must help them read the gospel in our lives,” said Paulus Hartono, an Indonesian pastor. He told of befriending a military commander of Hezbollah, a radical Islamist group

Mennonites in the Netherlands, by contrast, navigate a post-Christian society mostly populated by people content to avoid church. Henk Leegte, a pastor from Amsterdam, said many Dutch view the church as a place for hypocrites. But he is happy to be a listening ear for spiritual seekers.

“Sometimes the people who come in are very different from us, but we open up still,” he said. “When people knock on the door and think maybe this is a place to ask spiritual questions, I always say, ‘Yes, come in.’ ”

In a workshop led by members of the MWC Faith and Life Commission, Martin Junge of Chile, executive secretary of Lutheran World Federation, said he believed the word of God was too big to be comprehended by one human being—or any single faith tradition.

“As churches with different emphases and entry points, when we witness together to the gospel of Jesus, we are capturing something that no single denomination can own,” Junge said. “We need those others to get a larger view of what this word of God is all about.”

Carrying a skateboard, Devon Landis sometimes rode through the Farm Show Complex hallways, crossing paths with African women in brightly colored dresses. Curiosity and a sense of duty drew him to the assembly, said Landis, of Lancaster.

“I want the Mennonite faith to continue,” he said. “The spiritual progress of any group is possible only because individuals are working toward it.”

A highlight for him was sitting in the midst of an exuberant choir from Zimbabwe during a worship service.

Another African choir, from Kenya, arrived with only a fraction of its strength. After years of planning and saving money, only five of their 30 visas requests were approved.

“They are not the only group that experienced this kind of heartbreak,” worship leader McNiven said before the five Kenyans sang. He invited the crowd to stand for 30 seconds in prayer and solidarity with those who didn’t get their visas and to show that “we care for them and miss them here.”

Before an offering for the MWC Deacons Commission, the crowd was reminded that most of the Anabaptist churches’ growth is happening among people who are financially poor. Meanwhile, 95 percent of Anabaptists’ financial resources are located in North America and Europe.

The final worship service included the symbolic passing of a shepherd’s staff from outgoing President Danisa Ndlovu of Zimbabwe to new President Nelson Kraybill of the United States. Rebecca Osiro of Kenya succeeded Janet Plenert of Canada as vice president.

The final worship service ended with what was described as “the national anthem of Mennonites in North America,” an a cappella “Praise God from Whom All Blessings Flow.”

“Worship here this week is not simply a foretaste of heaven, it is the reality of heaven come down to earth,” Kraybill said.

The 17th world assembly is scheduled for 2021 in Indonesia.

Paul Schrag is publisher/editor of Mennonite World Review. This article was written for Meetinghouse, a group of Mennonite publications.

See more MWC coverage and the “For discussion” questions. 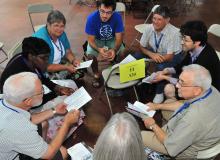 More than 250 friendship groups allowed MWC assembly participants to become friends with believers from around the world. (Photo by Dale D. Gehman for Meetinghouse)

Martin Junge, executive secretary of the Lutheran World Federation, was among the guests from other world churches who addressed the assembly. He said he was “amazed and humbled by the gift of reconciliation and forgiveness” in the Anabaptist-Lutheran dialogue. (Photo by Dale D. Gehman for Meetinghouse)

A group of five from Kenya sang on Thursday evening. Of the choir of 30, only these five received visas to come to the U.S. For a report from the visa task force, go to canadianmennonite.org/mwc-2015-visas (Photo by Dale D. Gehman for Meetinghouse)

The assembly was a “green” event with strong encouragement to compost as much as possible. (Photo by Dale D. Gehman for Meetinghouse)

Liesa Unger, chief international events coordinator for MWC, rides one of the Amish-made scooters used by volunteers and coordinators to get around the enormous complex. (Photo by Dale D. Gehman for Meetinghouse)