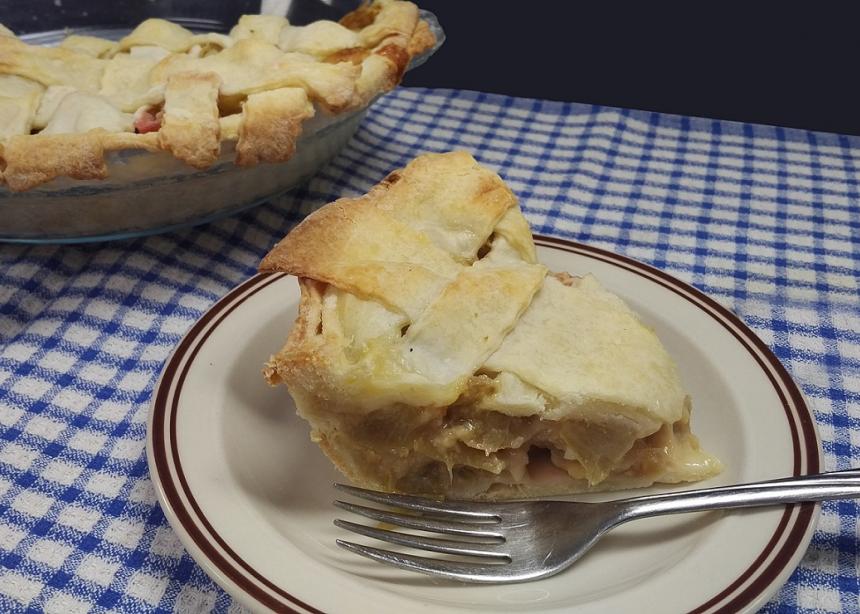 Tim Sauer, who is known as the “pie man,” bakes at least 200 pies a year that he gives away to encourage volunteers and those who work in church-related organizations. This is his recipe for rhubarb pie, a favourite of John Neufeld, executive-director of House of Friendship in Kitchener, Ont. (See more of Tim’s story here: "Pies bring a message of encouragement.")

Measure flour and sugar into a bowl and cut in the butter, using 150 strokes with a pastry cutter.

Add the egg and water, using another 75 strokes with the pastry cutter.

Using hands, gather together into a ball. Divide dough into four parts. Roll out two parts, each covering the bottom of a 9-inch, buttered, glass pie plate. Roll out remaining part and cut into strips for the lattice.

Whisk together in a bowl the sugar, eggs and flour. Mix in the rhubarb and stir.

Cover with pastry strips in a lattice pattern.

“Bake it until it’s right,” says Tim, who bakes his for one hour in a 390-degree convection oven. “But every oven is different, and you need to experiment until you get a nice brown crust.”