‘Maybe we’re all more similar than we think,’ youth says 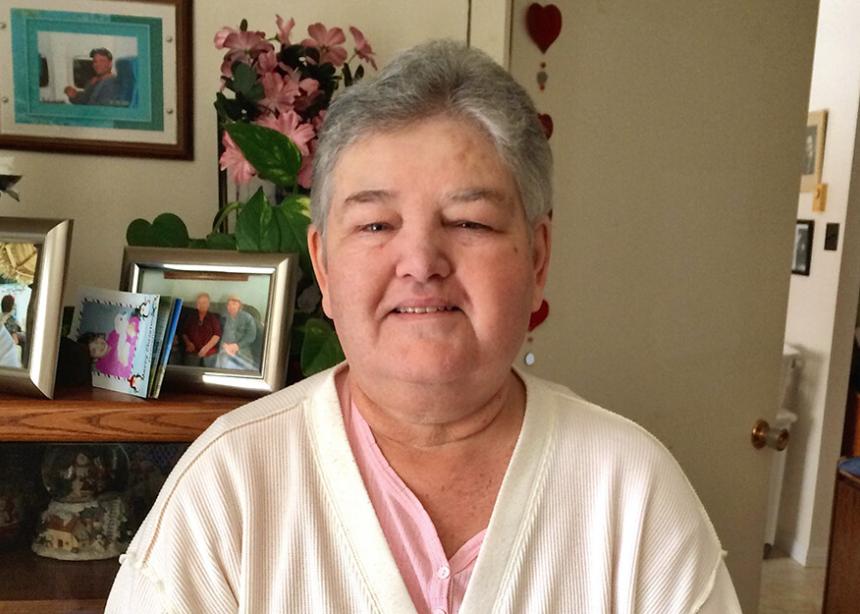 “We become a ‘nutcase’ when we’re isolated,” Winter says. “But it’s been so nice since [the youth group] have been here.”

Winter’s apartment in Friendship Manor in Altona, Man., is bright, comfortable, and filled with paintings she has created. A small dining table hosts an array of art supplies and her latest painting project—a bouquet of flowers in a vase. Mismatched furniture items purchased at the MCC Thrift Store fill the small living room.

Winter, 61, is one of the Manor’s oldest residents. She has lived in her two-room apartment for eight years. “You hear good and bad things about Manitoba Housing,” Bev says of the government corporation that helps finance the facility, but she describes her experience at Friendship Manor as wonderful.

The main common area of the building is bright and hosts four couches and a piano. The walls are light green and yellow, recently painted by AMC’s youth group. There is also a small kitchen with mismatched dishes.

Winter grew up in Winnipeg and met her husband in 1974. They moved to Altona, where Bev was a health care worker until she was injured on the job. She became the manager of a Subway franchise for four years but quit due to health issues. She retired early at the age of 54.

A divorce from her husband, after 33 years of marriage, left her looking for somewhere to live. Friendship Manor was ideal.

“I still go to him for advice,” Winter says of her ex-husband. He is the most influential person in her life, and their relationship and family is still important despite the divorce. Photographs of their three children cover the shelves of her living room.

Along with the photographs of her beloved family, Winter’s white-walled apartment is adorned with vibrant paintings, the majority of which are her own works of art.

Winter began painting in December, 2014, and has created 25 pieces of art since. She gives them away, hangs them up in her apartment, or places them around the common areas of Friendship Manor, where her passion can be appreciated by the residents.

When she was interviewed for this article, Winter had not smoked for three weeks. The poorly lit and shadowy hallways of Friendship Manor have a distinct cigarette stench due to the habits of a few residents. Winter has recognized a refreshing difference in the air of her apartment since she stopped smoking.

Winter recognized the realities of her early retirement included a lack of income, isolation from the outer community and less opportunity to socialize. Friendship Manor has allowed her to have a comfortable home despite her financial instability.

In the past four years, the Friendship Manor community has grown and the residents have created stronger relationships. The tenants often sit together in the mornings to wait for their Meals on Wheels. “Everybody’s happy here. We get along well,” Winter says.

Margruite Krahn, the youth group leader at AMC, initiated the breakfasts four years ago. “The drive behind bringing the youth and the folks at [Friendship Manor] together was to develop friendships, break down barriers, and as a leader to work hard at what it means personally to see my neighbour as myself,” Krahn says.

Extending Friendship Manor’s community to the AMC teenagers has created a level of trust and connection between two unlikely groups.

“They have been given their dignity and they repay us with trust and a wonderful love,” Krahn says.

Madelyn Mierau Friesen, a 16-year-old member of the youth group, says the breakfasts are about finding common ground.

“It’s hard for two groups of people who come from very different backgrounds to relate to each other, but I think we teach each other to be real and human,” she says. “Maybe we’re all more similar than we think.”

Beverley Winter has lived at Friendship Manor in Altona, Man., for the past eight years. (Photo by Paige Mierau Friesen)