Senior inspires others with desire to give 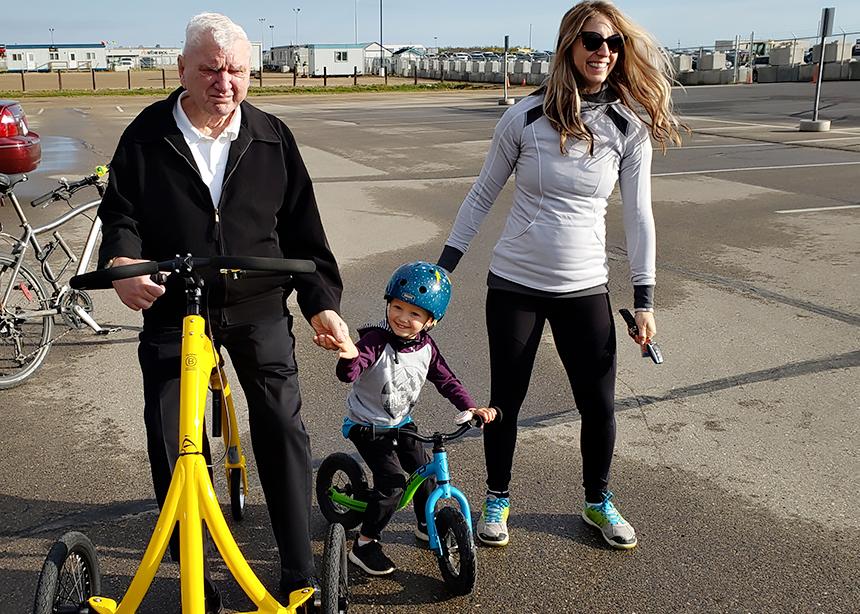 The oldest and the youngest participants in the Shekinah Bike-Paddle-Hike-a-thon both rode walking bikes. Irvin Driedger, 84, poses with Finnegan Fast, 3, and his mom Sarah Unrau. (Photo by Jeff Olfert)

The small group of cyclists cheered as Irvin Driedger set off on his walking bike, kicking off the 2019 Shekinah Bike-paddle-hike-a-thon. His participation was inspiring on many levels.

Eight years ago, he suffered a massive stroke. He could only move his eyes and one foot. The doctor told Irvin’s wife Donna that he likely wouldn’t survive.

But the doctor underestimated Irvin’s determination. With the help of many caring medical professionals, family members and friends, he regained the use of his left hand and learned to walk again. Although unable to speak, he can still communicate. Regular music therapy has brought him much joy and taught him to sing again.

Back in the 1980s, Irvin served on the board of directors of the Shekinah Retreat Centre. When Shekinah was short of cash, he organized a bike-a-thon as a fundraiser. The event went on to raise funds for the camp over the next 20 years, but its popularity eventually waned.

In 2018, the board revived it, but this year supporters called for more participation options. So this year’s event was dubbed a bike-paddle-hike-a-thon. Participants could choose one of three options:

In the summer, board member Jeff Olfert approached Irvin to ask if he and Donna would like to pilot the cyclists. He indicated that he was interested.

Around the same time, Irvin purchased an adult walking bike. One Sunday, he rode the bike into the fellowship hall at Nutana Park Mennonite Church in Saskatoon, where he and Donna attend. His appearance on the bike generated a lot of interest, says Donna, and gradually an idea took shape.

Irvin would kick off the bike-paddle-hike-a-thon on his walking bike and Donna would find sponsors for him.

It wasn’t difficult getting people to sponsor him. “I would tell people, ‘Irvin’s kicking off the bike-a-thon!’ and they would just get out their chequebooks,” she says.

Each time they received another donation, Irvin would reach for the calculator to keep track of the monies they had raised. “It was so good for his brain,” says Donna. By Sept. 14, the day of the event, Irvin and Donna had raised $5,000.

Irvin walked his bike from the parking lot, where the cyclists mustered, to the highway, a distance of about two blocks. Prior to getting the bike, he had been unable to walk anywhere without assistance.

He and Donna travelled the rest of the distance to Shekinah by car. When they arrived, he walked his bike from the parking lot to the picnic area, where the paddlers, who had arrived earlier, also greeted him with cheers.

The Shekinah Bike-paddle-hike-a-thon raised a total of $8,320 for the camp, with the 84-year-old Irvin raising the lion’s share. He acknowledges with a nod and a tear that it’s good to be able to make a contribution, and when Donna asks whether he enjoyed the event, he gives her a thumbs up.

“You have to do the little things that you can,” says Donna. Participating in the bike-a-thon is just one of many little—and not-so-little—things that help make life worthwhile for Irvin.

Each day he helps around the house by setting the table and loading the dishwasher. They may not seem like big accomplishments to most people, but, for Donna, they are meaningful contributions.

She understands her husband’s desire to give and to contribute to the lives of others, and she supports him in making that desire a reality. “Each day is a new blessing and chance to lighten and brighten somebody else’s day,” she says. “Irvin has taught me about gratitude and acceptance and joy for the day.”

This article appears in the Oct. 14, 2019 print issue, with the headline "'You have to do the little things that you can.'" 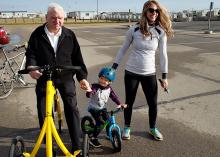 The oldest and the youngest participants in the Shekinah Bike-Paddle-Hike-a-thon both rode walking bikes. Irvin Driedger, 84, poses with Finnegan Fast, 3, and his mom Sarah Unrau. (Photo by Jeff Olfert) 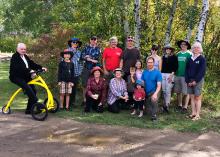 Irvin Driedger, left, stands with the paddlers in the Shekinah Bike-Paddle-Hike-a-thon after they had all reached their destination. (Photo by Jeff Olfert) 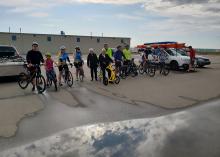 Cyclists line up behind Irvin Driedger, centre, on yellow walking bike, at the start of the Shekinah Bike-Paddle-Hike-a-thon. )Photo by Jeff Olfert)