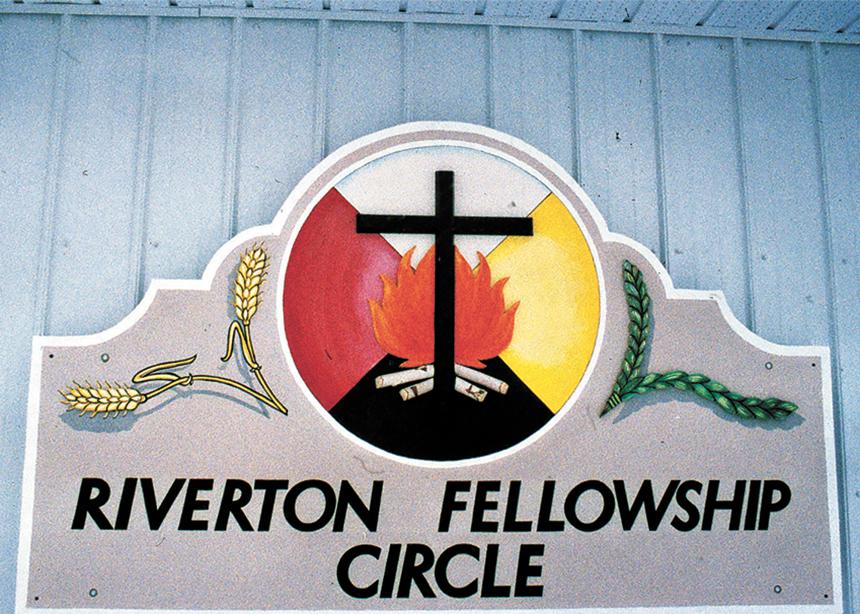 Riverton Fellowship Circle began meeting in 1985, when a group of Indigenous people in Riverton expressed desire for a church. (Mennonite Heritage Archives photo)

When the soft cloud of an expired dandelion explodes, the flower is gone, but the seeds that have spread far and wide soon erupt into new life. So it is with the recently closed Riverton Fellowship Circle. After 35 years of worshipping together, the church decided to close its doors. But its legacy will live on.

On June 24, when the congregation and its partners passed a motion to dissolve the church corporation and its assets, they also decided to give their building to the Riverton and District Friendship Centre, an urban-based Indigenous organization providing programming and services to all people.

Riverton Fellowship Circle began meeting in 1985 in Riverton, Man., around 100 kilometres north of Winnipeg, and joined Mennonite Church Manitoba in 2006. They constructed their own building in 1997, after gathering in the Friendship Centre’s basement for over a decade.

The congregation was initiated by a group of Indigenous people in Riverton who approached Neill and Edith von Gunten and expressed a desire for a church. The couple worked for Mennonite Church Canada’s Native Ministries in Matheson Island and Pine Dock, and many in the group knew of them through relatives in these communities north of Riverton.

Neill and Edith had many long conversations with the initiators about why they wanted a church and what services should look like, because “it needed to be their church . . . it needed to come from them,” Neill says.

The von Guntens and Barb Daniels, a member of Peguis First Nation and a Riverton resident, led the congregation of mainly First Nations and Métis members from many different denominations. They worshipped in a circle around a centrepiece of sweetgrass, a candle and a Bible, sharing stories instead of sermons. “We’ve been preached at too much in our lives,” Edith remembers them saying. “There’s lots of stories in the Bible. We want to hear those stories and what that means for us today.”

They also shared food and fellowship together after their services. “To me it was just like going to family and it became my church family,” says Daniels. “[We] could talk about anything, share our joys and sadnesses.”

For many years, 40 to 50 active participants regularly attended Sunday services, even increasing to 100 on special occasions like Christmas and Easter. But as dozens of core members died or moved away, the group shrank to only a remaining handful in the last several years.

After the von Guntens moved to Winnipeg in 2005 to co-direct MC Canada’s Native Ministries program, several pastors cycled through the congregation, but eventually there weren’t enough people or energy to sustain the fellowship.

“It was hard, very emotional at times, [but] we knew that it couldn’t carry on as a congregation,” Daniels says.

“It hurts to build the church . . . and then to dissolve it,” Neill says. “But as I look back, so much good has come out of it and is still coming out of it. And that just makes it all so worthwhile.”

The congregation gifted their building to the Friendship Centre to help this good work continue. The two organizations have had a close partnership; the church provided the centre with space to run programming, while the centre helped the church pay its bills.

“We feel we were truly blessed for them to give us the building. Now we can continue offering the many programs that we had started in the church,” says Tanis Grimolfson, executive director of the Riverton and District Friendship Centre. Some of these include a weekly supper club, beading, pottery, drumming lessons, making medicine bags and summer day camp.

The congregation also donated $30,000 to JoinHands, a program of Mennonite Men, paying back a grant they received from the organization for their church building project. By fundraising and setting aside money over the years, they wanted to help another church come to life as their chapter ended.

Other leftover church funds were used to set up bursaries for Indigenous young people. A bursary of $1,000 per year will help students attend Canadian Mennonite University. A bursary of $500 per year will give children the opportunity to experience summer camp at Camp Assiniboia. It was established because of the personal connection with the camp that many congregants had and wanted to continue.

“So in other words, the Riverton Fellowship Circle will live on,” says Neill.

The fellowship circle will also live on in decades of memories: fundraisers with hoop dancing and Red River jigging, Christmas pageants with trappers instead of shepherds and all of Riverton coming together to help raise the church.

The community was hoping to share memories together and celebrate the church at a closing service last summer, but it was postponed because of COVID-19 and will take place at a future date. 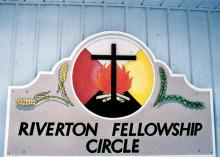 Riverton Fellowship Circle began meeting in 1985, when a group of Indigenous people in Riverton expressed desire for a church. (Mennonite Heritage Archives photo) 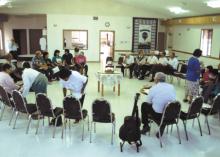 Riverton Fellowship Circle always met in a circle, around a centrepiece of sweetgrass, a candle and a Bible. (Mennonite Heritage Archives photo) 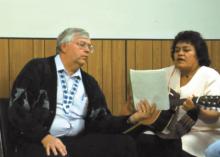 Neill von Gunten (left) and Barb Daniels (right) were two of Riverton Fellowship Circle’s leaders, along with Edith von Gunten. Here they are pictured in 1997 at the church. (Mennonite Heritage Archives photo) 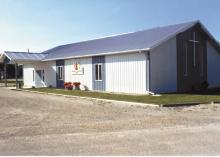 Riverton Fellowship Circle built their own church building in 1997, after meeting in the Riverton and District Friendship Centre for over a decade. (Mennonite Heritage Archives photo)