Recognizing potential in an uncertain future 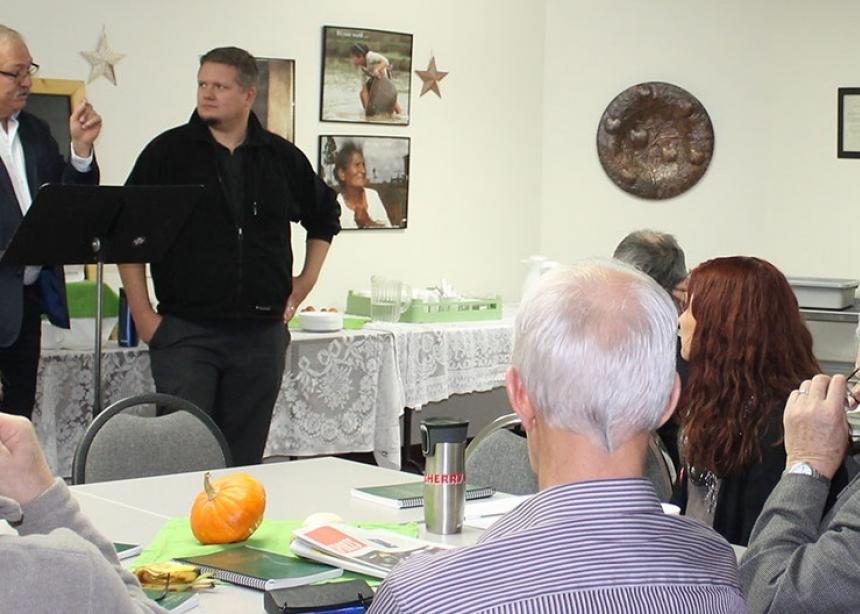 MC Canada’s international Witness program will shift toward relational funding of Witness workers. This, said Metzger, has the potential to enliven Witness work. Partner organizations such as Mennonite World Conference will approach MC Canada with a request for workers. That request will then “go through our grid to make sure it is compatible with what we do,” said Metzger. From there, it will go to the regional churches, and from there to congregations, who will be asked to prayerfully consider whether God is calling them to support this work. Once a “confirmation of call” is received from congregations, Witness workers will be placed.

Eric Olfert of Mount Royal Mennonite confessed to feeling confused by this funding plan. Witness workers George and Tobia Veith will be itinerating in Saskatchewan this winter. Olfert wanted to know, “Do we ask people to give to Witness or to the Veiths?” Olfert suggested that the funding plan “seems to have the potential to become complicated.”

Ryan Siemens, a regional church minister for MC Saskatchewan, explained that if more funds are designated for a Witness worker than that worker requires, it would be possible to reallocate those funds to the needs of other workers.

Siemens also noted that some new Canadian congregations have expressed interest in returning to their home countries to plant Anabaptist churches or peace centres. While this type of work hasn’t traditionally been funded through Witness, it might be possible under the new structure, he said.

MC Canada’s new structure is brimming with potential, it seems, but Metzger cautioned his audience: “We don’t know what the church is going to look like. It’s like peering into a thick, dense fog. We are living in a sustained time of uncertainty, ambiguity and mystery. It would be foolish for us to pretend that we know.”

Not everyone is comfortable with uncertainty. “A group left our church citing ‘a desire for orthodoxy,’ ” said George Epp of Eigenheim Mennonite. “It’s almost as if change is too much for some people.”

Metzger agreed that change can make people feel uneasy but noted, “We’re moving into a time where more people are valuing disagreement, a time where unity is defined by how we treat each other, in the love of Christ, when we’re in disagreement.”

Metzger also noted that the changes MC Canada is undergoing are not unique, but are happening “all across Christian expression.” Citing American author Phyllis Tickle, Metzger said that the church is experiencing a shift away from the Bible as authority, to community discernment. Anabaptist Christians, said Metzger, are perfectly positioned to help people who are wrestling with what they believe.

It should greatly alarm us when top leadership of the MC states that "Bible as authority" is something from which we are shifting away. To the contrary, our Confession of Faith states the following:

"We acknowledge the Scripture as the authoritative source and standard for preaching and teaching about faith and life, for distinguishing truth from error, for discerning between good and evil, and for guiding prayer and worship. Other claims on our understanding of Christian faith and life, such as tradition, culture, experience, reason, and political powers, need to be tested and corrected by the light of Holy Scripture."

When a church becomes so schizophrenic that it proudly contradicts its core beliefs, its fate has largely been sealed. As a result it should not shock us when we inevitably witness the collapse of MC Canada one day. "Community discernment" is not required to lay hold of that truth, only a quick read through the book of Jeremiah, where God clearly demonstrates His response to apostasy.