Pushing back with colour 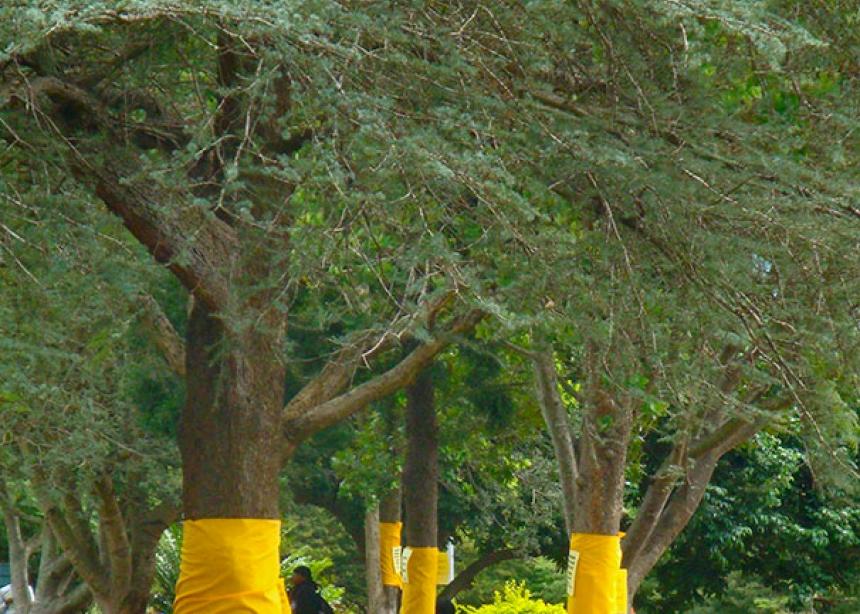 What do you do in the face of hatred, a hatred so immense that it drives people to pillage, beat and even kill others? What do you do when that hatred is simultaneously “out there” and in your own backyard? How do you show love, kindness and hospitality in rejection and defiance of such wanton violence?

These are questions that we wrestle with regularly as we recognize our complicity in ongoing violence in the world today. For us, these questions have taken on new meaning as violence has once again emerged in South Africa over the last weeks. Violence directed at African foreign nationals erupted in Durban, Pietermaritzburg and Johannesburg, killing at least seven, displacing more than a thousand and causing fear to spread throughout the country.

Some have termed this violence xenophobic, which means “fear of the foreigner.” But it is more than that. This violence is born out of an immense frustration and disillusionment that is more about economics than about nationalism or tribalism. Apartheid ended in 1994, but many people in South Africa are still waiting for things to change. Many struggle to eke out a living. Unemployment rates hover at 25 percent or higher. Perceived issues of “foreigners” taking jobs, though by and large a misconception, fuel anger and resentment.

With the complexity of such issues swirling around us, we met with a small group of concerned people in Pietermaritzburg who also felt some kind of action needed to be taken. A message other than violence needed to be given, a demonstration to foreign nationals that the attitude reflected in the attacks is not the attitude held by the majority of South Africans.

It came down to the colour yellow. Yellow signifies friendship, warmth, welcoming, joy and hope—everything that we want for our cities, country and world.

On the evening of April 18, about 20 of us gathered with bolts of yellow fabric and set out to wrap the trunks of trees lining the streets in the downtown core of Pietermaritzburg. In the heart of the central business district we wrapped about a hundred trees along two kilometres of city streets using more than 200 metres of fabric. To each tree we posted a statement from South Africa’s own Freedom Charter: “South Africa belongs to all who live in it.” Another sign read, “Maritzburg says no to xenophobia.”

As we moved down the street, people observed us through the windows of their homes. Others came out onto the street or stopped as they walked by to see what we were doing. Many of these people were from places other than South Africa—the targeted foreign nationals from Ethiopia, Somalia, Malawi, Zimbabwe and elsewhere.

They invited their friends to come and our numbers swelled. Some of our new friends took fabric and posters, and draped the trees themselves. They chatted and laughed with us. Mostly they thanked us.

These actions may not have a long-lasting effect on attitudes of hatred or create enduring change. Such a shift requires ongoing work and effort. These actions may not be very effective in the larger scheme of things. However, those who joined us and those who see the yellow on the trees and read the signs know differently.

Karen Suderman is a Mennonite Church Canada worker in South Africa with her husband, Andrew, who wrote the feature, “Journeying towards reconciliation.”  They coordinate the Anabaptist Network in South Africa (anisa.org.za) as it strives to walk with, support and grow communities of peace, justice and reconciliation. 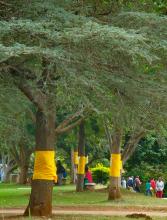 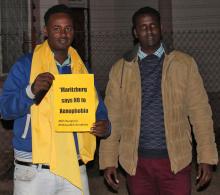 As a colourful protest against xenophobia unfolded in downtown Pietermaritzburg, South Africa, people living in the neighbourhood come out and help wrap trees in yellow fabric to symbolize friendship, warmth, welcoming, joy and hope, and to fasten posters of inclusion to the fabric. (Photo by Andrew Suderman)