The 'poet of ironwork'

A perk of donating his ironwork pieces to MCC is that he can raise more than he can give, says John Wiebe 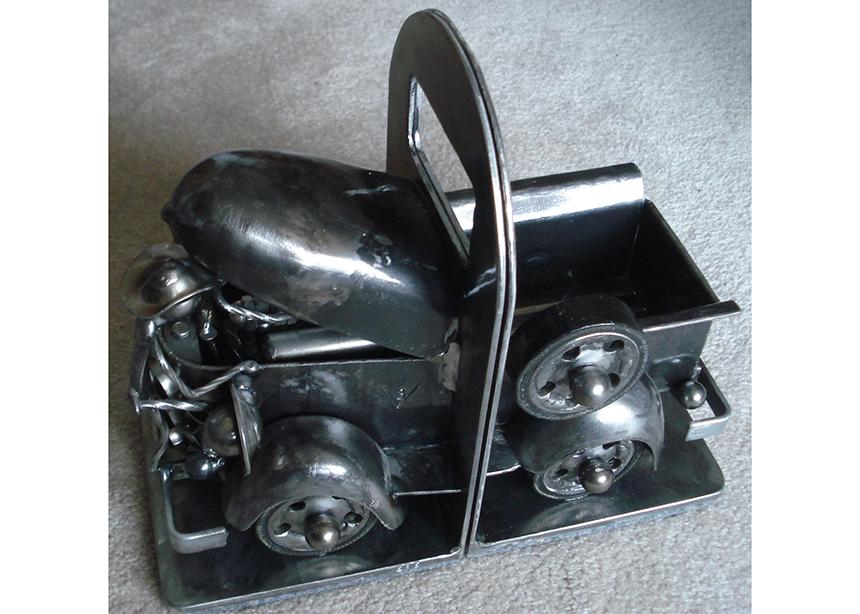 If you are Mennonite and live in Alberta, you may not know John Wiebe, but you’ll recognize his work. Kate Janzen calls him the “poet of ironwork.”

Every year since 1973, Wiebe has been creating artworks made from scraps of steel and donating them to the annual Mennonite Central Committee (MCC) Alberta Relief Sale. With this being the first year the sale is cancelled, it is also the first year in more than four decades that he will be unable to donate his pieces.

A number of years ago, Wiebe was inspired to make a dove candleholder from ardox (twisted) nails. His friend Menno Epp was at a board meeting in Guatemala City when he saw a dove candleholder and sent a sketch to Wiebe. “He had to give me a little bit of a push,” says Wiebe, “but I’ve enjoyed making them.”

According to Janzen, a long-time member of Foothills Mennonite Church along with Wiebe, “A professor from California, a Mr. Byler, was attending an Alberta sale and was very interested in the dove candleholder. Kurt Janz kept bidding until $700. Kurt gave the piece to Mr. Byler, who took it to the MCC sale in California. John found out later that the ‘dove’ went for $3,000.”

Now multiple churches in Alberta use the peace dove candleholders as part of their worship services, and some are still on the waiting list to pick up at a future relief sale.

A pressure welder by trade, Wiebe began creating artworks when he couldn’t find bookends heavy enough at the local Woolco store to hold an encyclopedia set. He figured he could make his own, and that began his lifetime hobby of creating pieces in his little winterized shed in the backyard, where he often tinkers until midnight.

To date, he has created hundreds of bookend sets, with no two sets being identical. He does not sell the sets—but only donates them to the MCC sale or makes them for family and friends as gifts. All 11 grandchildren have received horseshoe bookends, and with a great-grandchild on the way, he will soon have to start on another set.

Other sets have included Ford trucks, pig pots with meat grinders, and his wife’s favourite: a bull dog sitting on a Mack truck. Wiebe was able to buy the bulldog using the “Ralph bucks” every Albertan received in 2006 from Ralph Klein’s government.

A perk of donating his pieces to MCC is that he can raise more than he can give. Last year, he donated seven items and raised almost $2,400—much more than he could afford to donate. Wiebe talks about how “the satisfaction is not from the money raised, but from sharing with the people you care about.”

One year, there was a low turnout at the sale on the Friday night. His friend Herta Janzen bid on one of Wiebe’s items and got it for $25. She felt guilty and told him she was sorry. He replied, “Don’t worry about it. I bought your afghan for $25, and you took a lot longer to make that!”

Wiebe has also volunteered at the MCC thrift shop over the years and once picked up a bunch of golf clubs—some for free and some for $3 apiece. He turns them upside down and makes them into coat hangers.

A couple of times he made rifle lamps, which easily sold. Even though the .22s were only used for shooting gophers and butchering, he figured he had better check first with MCC to make sure it was okay. He called Abe Janzen, then director of MCC Alberta, to find out what he thought, and he said to go for it.

Growing up in McMahon, Sask., in a Sommerfelder community, he eventually moved with his parents to Taber, Alta., where the family farmed sugar beets. Wiebe grew up with 11 siblings. Later, he apprenticed as a welder in Coaldale, Alta. Today, he is 84 and still going strong.

His son Doug Wiebe, a member of Lethbridge Mennonite Church, appreciates his father’s example: “Going to the annual MCC Alberta Relief Sale has been a part of my life for as long as I can remember. As a kid, part of the reason for going was seeing how much my dad’s metal bookends and candleholders would raise for MCC each year. As an adult, I started wondering what I could make for the relief sales. I don’t know if I would be baking bread for each Coaldale MCC Sale if my dad hadn’t made an annual contribution of his metal art. Life lesson learned: Healthy long-term relationships are better sustained when we ask the question, ‘What will I give?’ more often than ‘What will I get?’ ” 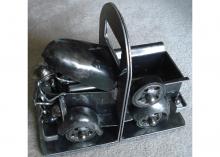 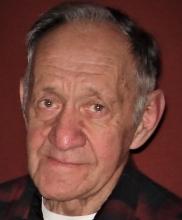 John Wiebe, a ‘poet of ironwork’ 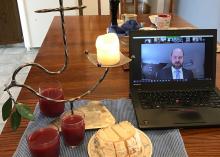 The Wiebe-Neufeld family displays one of the iron doves made by John Wiebe while watching this year’s Inter-Mennonite Good Friday service and preparing for communion in Edmonton. (Photo by Tim Wiebe-Neufeld) 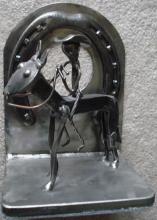 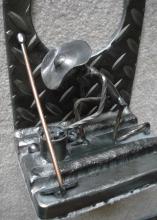