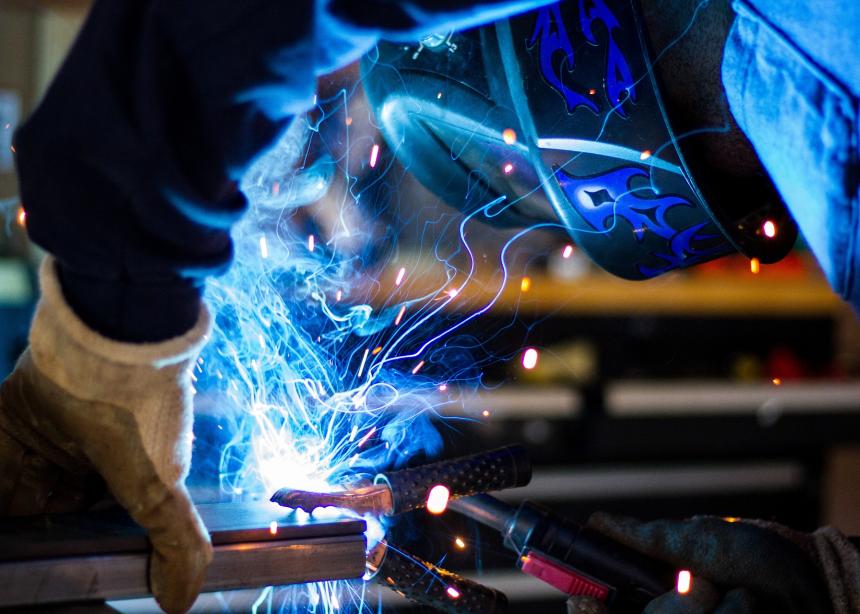 'My leather welding gloves are quite old. But I keep them, you see, even though the left glove has a hole in the thumb...' (Image by Free-Photos/Pixabay)

In Elise Epp’s “Clothes to match your values,” she pointed out the ecological harm posed by the overuse of highly processed leather products. I immediately felt warm . . . and righteous.

That bears explanation. I have a small business venture called Blind Guy Welding. I create whimsical metal sculptures for fun and occasionally for profit.

My leather welding gloves are quite old. I was not so aware of the ecological harm in replacing them frequently. But I keep them, you see, even though the left glove has a hole in the thumb, a hole about the diameter of a large Sharpie pen. When I pick up hot iron, I invariably burn my thumb. This typically happens a number of times in a day. While you might understandably think this fellow is not bright, hear my reasoning.

The right glove is still in good repair. If I were to throw the pair away and reach for new gloves—of which there are several pairs on a shelf, bought on sale somewhere—that perfectly functional right glove would be rubbish—ecological waste and harm to the earth.

Welding is typically carried out wearing shorts, Dawgs boots, and a T-shirt festooned with many burn holes. Yes, there are leather products that could protect me from head to toe, and I own most of them, but where is the adventure in that? It’s much more delightful to sit in church during sermon time while a grandchild counts the scars on my arm.

This is not a new attitude, developed in response to recent ecological concerns. When I was a child, and the task du jour involved rolling up rusty barbed wire, we were given leather winter mitts to protect our hands, but we were told to wear them backwards, so as not to damage the critical front surface. The actual concept of work gloves was totally foreign to me. It wasn’t until adulthood that I realized work gloves were a thing.

This was not the only childhood training in careful and efficient living that has impacted me for the last 60-plus years. I recently viewed a Law & Order: SVU television program, where the villain was ordered out of the house he had been holed up in, and was called to “throw down his gun.” I winced.

That did not jibe with how I was taught to treat guns. Could the villain not lean over and set the weapon gently against the house or lay it on a carpeted area? Otherwise, the mechanism might be damaged, varnish scratched or dirt enter the barrel. And the sound of weapons clattering onto cobbled or concrete surfaces always causes unease.

Rifles were common and comfortable in our childhood home, but respect was taught and enforced. The user understood where a gun could be pointed, and where not; when it could be loaded, and when not. Guns were never to be dropped.

My father died 25 years ago, before the church spoke about creation care, climate change, carbon footprints and recycling. But he taught and lived lessons of respect and appreciation for the simpler, humbler things that surrounded him. Farm auction sales were times to scoop up pieces that no one else could make work and turn them into a challenge.

Somehow, that translates for me into a lesson that what is created can become holy learning. Even, perhaps, a burned thumb.

Ed Olfert (p2pheo@sasktel.net) has discovered that God is encountered more readily when the jaw is not so rigid.

Read more In the Image columns:
Parable of the 'phone' incident
Leon's 'fifth step' to sobriety
Millie, my lions and me
No 'happy clappy Christians' for Blake
In court with 'Clifford'

'My leather welding gloves are quite old. But I keep them, you see, even though the left glove has a hole in the thumb...' (Image by Free-Photos/Pixabay)