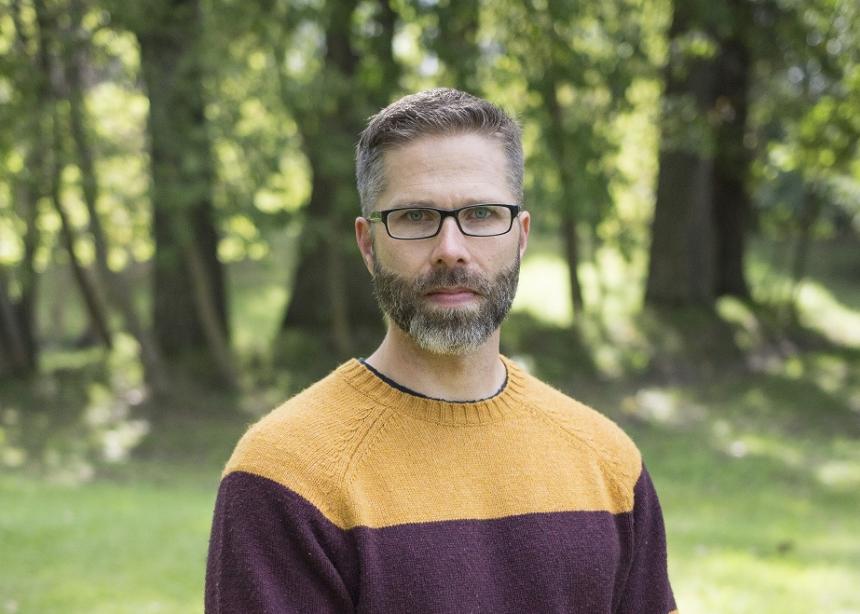 To the friends living in the colonized lands of the Salish, Mi’kmaq and Innu. This is Peter, follower of the poor Christ, in prison on the West Coast. I write because the time is urgent. Some say, “The end of the world is at hand” (I Peter 4:7).

Some say, “Eternity is being determined now.” Some say, if the idols of capital continue unabated, we’ll “exceed the threshold of 1.5 degrees in 10 years.”

The crucified across “Canada” have sounded the alarm. Host peoples and waters, trees and fish have lifted their voices in united lament: “Our common home is in peril!” They have summoned big business and urged the affluent: “Cease and desist your extractive ways!”

Yet the establishment, driven by voracious visions of growth, have shut down ears and suspended hearts. And so have most Christians. Addicted to the throw-away culture, numbed by Netflix, distracted by dreams of the next marvellous vacation, they sit idly by, offering tacit blessing to the status quo.

Is there hope? Can God move us out of climate darkness and into a measure of light? (I Peter 2:9) Will a remnant of the church join the bruised and battered who are standing up for Sister Earth?

He came preaching peace, good news of God’s reign. He came preaching challenge, contesting the reign of death. “He was put to death by the powers, but made alive in the spirit” (I Peter 3:18).

Remember, friends, our Lord was killed not because he helped the poor, not because he showed mercy to the suffering, but because he confronted the ruling authorities. You simply can’t go around saying hard things like he did and expect to live long.

Remember, friends: God has called us to do good in the form of this Christ. Earth is being uncreated, and the forces of the fossil economy—oil corporations, near-sighted governments, free-market churches—must be challenged. Yes, we do good through gentle lifeways. Yes, we do good by living simply and alternatively. But we also do good by denouncing the gods that are consuming God’s world.

I don’t object to anyone taking a passionate stance regarding environmental issues, but please don’t misapply scripture to support those views. There are red flags throughout this article that point to the new “Green Gospel” which distracts us from the real crisis in the world—lost souls in a state of sin and separation from God.

For example, let’s look at the questions posed here: “Is there hope? Can God move us out of climate darkness and into a measure of light? (I Peter 2:9) Will a remnant of the church join the bruised and battered who are standing up for Sister Earth?”

First of all, the darkness spoken of in 1 Peter 2:9 refers to spiritual darkness, not “climate darkness.” It’s a spiritual darkness for which the only solution is the light of Jesus Christ, who came to seek and to save those who are lost. The Bible reference cited regarding this issue (1 Peter 2:9) says, “But you are a chosen generation, a royal priesthood, a holy nation, His own special people, that you may proclaim the praises of Him who called you out of darkness into His marvelous light.” So what does that mean? God’s people are to proclaim the praises of Jesus Christ, who called us out of spiritual darkness into His light. It is a calling to praise the One who had to die so that we could be saved from spiritual darkness that leads to eternal death. Clearly, 1 Peter 2:9 has nothing to do with the environmental concerns referred to as “climate darkness” in this article.

I’d like to ask where in scripture do we find a mandate for a remnant of the church to join “the bruised and battered” who are standing up for “Sister Earth”? An earth that, according to God’s plan, He will burn up one day and replace with a new earth (2 Peter 3:10-13 and Revelation 21:1). God’s mandate for the church is to “Go into all the world and preach the gospel to every creature. He who believes and is baptized will be saved; but he who does not believe will be condemned” (Mark 16:15&16). I find that this message gets lost when churchgoers become involved in environmental affairs. Sister Earth or Mother Earth become top priority, not the people who remain lost without Christ.

I am also bothered by the suggestion that enduring suffering as a result of challenging the “forces of the fossil economy” will bring us “the approval of the One who raised Christ from the dead.” Interesting statement, one that I’ve never encountered before. Perhaps it’s the outcome promised in the “Green Gospel.” But according to the Gospel of Jesus Christ, only a saving faith (in our Lord Jesus Christ) that endures to the end will meet with God’s approval on Judgment Day.

Thank you to Ms. Fehr for thoughtfully outlining significant issues with the letter by Steve Heinrichs.

Mr. Heinrichs has crossed a threshold when he deigns to speak in the name and authority of the Apostle Peter. Having deep concerns about creation and its treatment is laudable. Speaking on behalf of the Apostle Peter is and inventing a new gospel is heterodox.

I want to thank Steve for his creative re-imagination of what Peter MIGHT say to us today in our context of climate change and other compounding ecological crises. It is an important message to the church in a time when our desire for unlimited consumption fueled by the cheap oil and advertisment threatens to spin God's beloved creation out of the balance that enables us to live in our common home. Elaine Fehr worries that concern for creation distracts from "the real crisis in the world—lost souls in a state of sin and separation from God," but is this world not also God's beloved creation? Is not our lack of attention to and active destruction of creation an expression of the sin that is our separation from God?

There is much to say here, but I would just refer to the reformed theologian Steven Bouma-Prediger who says, "creation care is not the whole gospel, but without it the gospel is not whole." That in essence is what it boils down to to say that we believe in God the creator who created this world very good.

The other issue at stake is a question of genre. Clearly this is a creative and contextual reimagination to help us read an old and maybe too seemingly familiar text in a new light given a new context. Steve correctly highlights the many political themes in Peter's letter and translates them into the current context. It is not a claim to definitely determine the meaning of 1st Peter once and for all, but rather an specific interpretation in time, just like any good sermon is.

I wonder if those who paint Steve as a "heterodox" preacher of a "green gospel" might benefit from an actual conversation with Steve who I know to be a dedicated follower of Jesus, who understands the cost of discipleship.

I like creative writing that promotes a good cause. An apocalyptic protest like this can definitely serve to wake us up, challenging us to reduce over-consumption and to seek the cleanest and best energy solutions possible. Fair enough. But the condemnation of fossil fuel-related businesses does seem unfair, and certainly one-sided. I once worked in the oil/gas industry in Alberta, and I remember those days fondly. I worked alongside good people who believed they were doing important work. That world still exists.

Let’s remember that in countless ways, we are all participants in a fossil fuel-fueled world, in which industry exists to serve our demand. Even burning wood in the wood stove is a fossil fuel activity, and so is using a plastic keyboard or a plastic toothbrush. And even in past eras of only wood and coal, all of our ancestors were participants as well. Today, one of the chief problems is simply that in a global age of vaccines, sanitation and stable food supply, there are just so many more of us. As much as anything else, this is fundamentally changing our relationship to the planet and its resources.

Realistically, it will be an incredibly long road forward to try to wean ourselves and our societies off of just some of our fossil fuel use. And there will be pipelines alongside that road for a long time to come. If some of those pipelines move Alberta oil or B.C. LNG towards China to help China get off coal, maybe that will have to be part of the picture too. That’s how tied in we all are -- it is a complex situation not easily solved.

Finding the way forward together with our First Nations peoples is also very complex, and I am sure we all realize this as well. Working for fair and just participation and consultation is also important.

Reading this article makes me dream that we could somehow step back from the language of judgment just a bit (unfortunately, the dualistic mindset underlying Peter’s letter certainly lends itself to this). Perhaps we can find ways to invite one another to explore topics like this one, with less heat. And perhaps we can also include the many Mennonites and indigenous people employed in petroleum and petrochemical industry jobs. We need to hear from these ones among us also, as part of the conversation, without simply shaming them.

Whether the goal here is to try to move our constituency towards more of a shared, faith-based ethic, or to seek solutions, perhaps it would also be helpful to once again frame this issue as more of a demand problem, a consumption problem, than as a supply problem. This could lead us in some different and perhaps healthier directions -- such as making renewed efforts together to reduce needless use of plastics, to promote active transportation in our cities, to celebrate lower carbon-footprint farming methods in the country, and to promote access to education internationally (which would lead to lower birth rates in some global settings). Putting energy back towards these kinds of goals would be a good alternative to simply making fossil fuel businesses, pipeline companies and governments out to be culprits and campaign targets. Maybe they aren’t actually the problem. They will all be needed as part of the solution.