‘It’s only limited by our imaginations’ 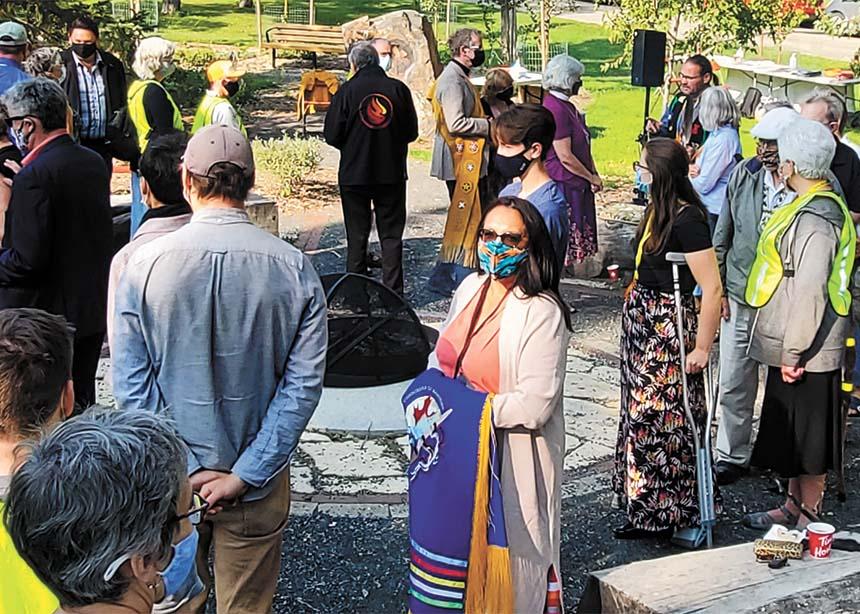 Religious and community leaders invited by Indigenous elders gather together at the Kapabamayak Achaak Healing Forest at St. John's Park in Winnipeg, on Sept. 19 to re-enact traditional ceremonies that were part of the signing of Treaty One in 1871. (Photo by Michael Pahl)

The land where the Red and Assiniboine rivers meet the Prairies, including Winnipeg and most of southern Manitoba, is Treaty One territory. Treaties, which exist in many parts of Canada, are commitments by multiple parties to live in relationship and share the land. Aug. 3, 2021, marked 150 years since representatives of the Crown and Cree and Anishinaabe peoples signed Treaty One. Mennonites across the region took time this year to commemorate the anniversary by learning its history and trying to engage with its call.

A fall worship series at Charleswood Mennonite Church in Winnipeg focused on decolonizing the church; the people gathered wore “We are all Treaty People” pins.

Back in Winnipeg, First Mennonite Church connected with an Indigenous camp on the legislative grounds to offer supplies and support, and Home Street Mennonite Church held a treaty service with a smudge and drumming song.

Michael Pahl, Mennonite Church Manitoba’s executive minister, was invited, along with other religious leaders, to participate in an event led by Indigenous elders, which included the traditional ceremonies that were part of the Treaty One signing in 1871: a pipe ceremony, a water ceremony, a gift exchange and a feast. The day also included a welcoming ceremony. To the sounds of drumming and singing, the elders welcomed the settlers from each of the four directions into their circle with the sacred fire.

“This is what was understood back at the signing of the treaties, that this was a welcome of people to share in the land and to treat each other well,” Pahl said. “It was very moving.”

The fifth annual “We are all Treaty People” event for the public followed in the afternoon, featuring speakers and musicians online due to COVID-19. Mennonite Central Committee and Mennonite individuals were represented in the organizing group.

Esther Epp-Tiessen, chair at Home Street Mennonite, researched the treaty’s history for its June worship service on the theme. She explained that Treaty One was the first of the 11 Numbered Treaties in Canada. It came about because of the insistence of the First Nations, so that Indigenous rights to the land would be protected as increasing numbers of white newcomers settled on the land and agricultural development boomed.

The written treaty document allotted acres for each family and payment for each person under the agreement that the First Nations would surrender almost all of the remaining land to the Crown.

“But the treaty is much more than the written document,” Epp-Tiessen wrote. “The Canadian courts have ruled that the treaty includes not only the written words, but also the record of the negotiations and the oral history passed down.”

Dorothy Fontaine, MC Manitoba’s director of missions, added that Indigenous people understood the concept of treaty as a relationship between people, land and Creator, whereas settlers saw it as a transaction of land ownership between two parties—settlers and Indigenous peoples. The Crown soon violated the treaty agreement with the creation of the Indian Act, reserves, residential schools and laws to ban Indigenous ceremonies.

“Canada considered the treaty as a legal tool for gaining access to land for settlement rather than the symbol of a binding and reciprocal relationship,” Epp-Tiessen wrote.

Treaties have many connections with the biblical understanding of covenant, said Fontaine, who preached on the topic in several MC Manitoba congregations this year. They are both sacred agreements, with many similar principles at their foundations.

These various small actions are not enough for Will Braun, a member of Pembina Mennonite Fellowship in Morden, Man. who has been involved with the Truth and Action working group in southern Manitoba.

“In 1873, the government granted the East Reserve, and West Reserve [in 1876] to Mennonites . . . . We’ve been living side by side here, Mennonites and Indigenous people, for just shy of 150 years, and I find it really sobering that, on the anniversary of the signing of Treaty One, it became obvious that we don’t have the kind of relationship with Indigenous people that would” initiate collaboration or invitations to commemorative events, he said.

Fontaine said Mennonites have a job to continue to listen and learn, but also to support Indigenous-led initiatives that address the disparities between Indigenous and settler peoples. Whether it is access to education, health care, food security or clean water, she said that “there’s significant differences between Indigenous and settler peoples, and that shouldn’t be if we really truly honoured our relationships.”

An Indigenous solidarity working group was recently created within MC Manitoba, and numerous churches have projects in the works, but there is a lot more room for Mennonites to grow in this work, according to Fontaine.

“I think the tendency might be sometimes to only think of one or two ways [to engage], but if you look at something like the Truth and Reconciliation Commission, it’s breathtaking in its scope,” she said. “It’s only limited by our imaginations.” 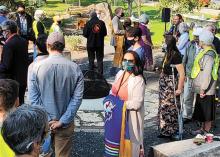 Religious and community leaders invited by Indigenous elders gather together at the Kapabamayak Achaak Healing Forest at St. John's Park in Winnipeg, on Sept. 19 to re-enact traditional ceremonies that were part of the signing of Treaty One in 1871. (Photo by Michael Pahl)