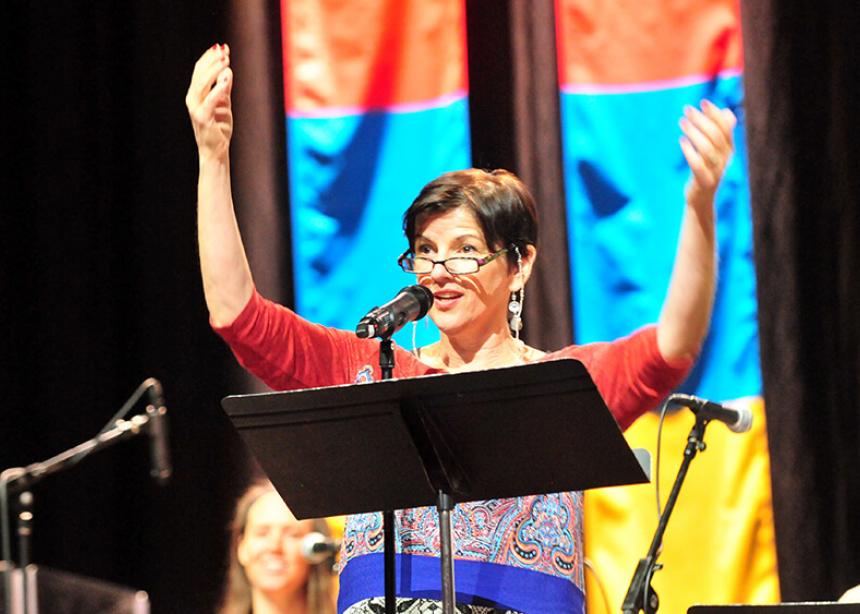 Worship rises to the rafters as Mennonites and Brethren and Christ join their voices in music from around the world at PA 2015 in Harrisburg, Pennsylvania. Differences exist in theology and culture, yet music is a unifier at the conference, even when it stretches comfort zones.

Whether new or familiar, songs are among the highlights of the conference for many. “I just wish we could sing and sing,” remarked one participant.

“I want people to come away from this week saying ‘Wow, I didn’t know I could have a worship experience with Asian music,’” said Marcy Hostetler, song leader for the week and choir director at Lancaster Mennonite High School.

As participants learned songs and movements from many countries, Hostetler was hoping for a common worship experience. “When you open up, you experience something outside of yourself, you experience God.”

The music ensemble itself was diverse, with a pool of talented musicians from around the world. With only three days to practice and a variety of cultural views on women in leadership, Hostetler had concerns about how the group would function.

“We have not had a single issue. I’m experiencing joy leading with these people.”

Part of the joy comes from unexpected connections. When Hostetler recorded an Angolan refugee boy singing in the Democratic Republic of Congo in 1983, she could not have imagined being on the same music team at assembly 32 years later.

Though all her cassette tapes were later stolen, Hostetler’s brother found the tape containing Dodo Miranda’s voice in his home. When Miranda applied to be in the MWC music team, Hochstetler had the joy of sharing the found recording with him.

Each day featured a different continent in music selection, including Asia, Africa, Europe and North America. By worshipping in a variety of styles, Hostetler has a vision that the music will be “a powerful bonding medium. There is nothing like singing together to cross cultural boundaries.”

Laura Kraybill of Elkhart, Ind., will begin studying theology this fall. For the past five years she directed the theater program at Hesston College, Kansas.