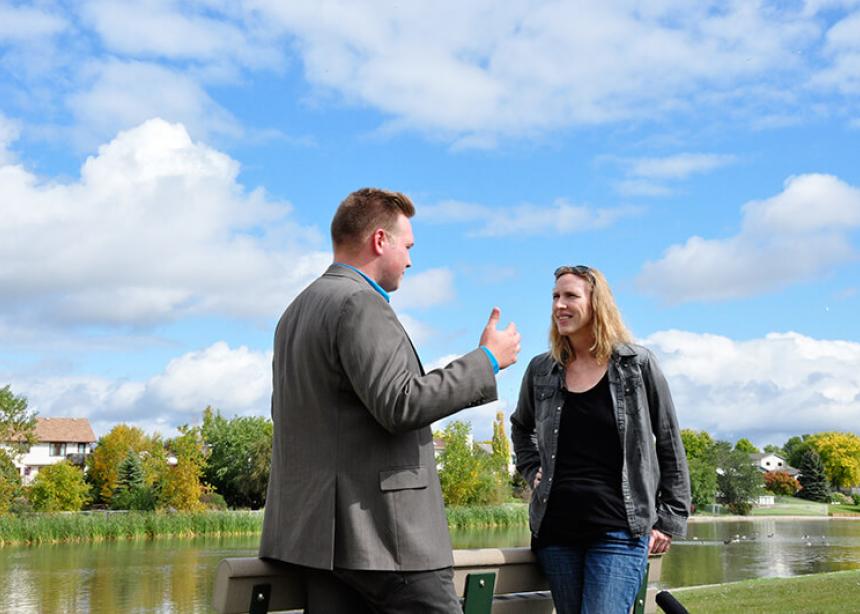 What makes Mennonites funny, and what does their sense of humour say about them?

Those are the questions at the heart of That Mennonite Joke, a new documentary from Prairie Boy Productions. Written and directed by Winnipeg filmmaker Orlando Braun, the documentary follows Niverville, Man., comedian Matt Falk as he traces the roots of Mennonite humour.

Falk, who placed second in the World Series of Comedy in Las Vegas in 2010, has dealt with his Mennonite upbringing in his material before. That Mennonite Joke shows him preparing to film a comedy special and wondering if there is enough fodder for humour in his Mennonite background to include more jokes about it in his act.

Braun, who co-owns Prairie Boy Productions with That Mennonite Joke producer Jorge Requena, created the film for MTS Stories from Home, a series available to MTS (Manitoba Telecom Services) subscribers in Manitoba, as part of its video on demand offerings.

Braun wanted to show viewers the lighter side of Mennonites. “I think you can learn a lot about a culture by getting to know their sense of humour,” the 34-year-old filmmaker says.

With a 20-minute running time, the documentary will no doubt leave viewers wanting more. Still, Braun manages to pack in a lot of insight about the things that make Mennonites funny.

“Mennonites often lived on the fringes, so when there’s hardships, the humour just emerges as a survival mechanism,” he says.

Falk adds that comedy has always been built on the viewpoints of people on the fringes of society. “It’s people who are outside of the everyday [who] can look in at the everyday and make fun of [it].”

The Low German language also features prominently in the film, including an interview with Nathan Dueck, a poet who incorporated the language in his most recent collection, He’ll, and 3molPlaut, a comedic musical trio from southern Manitoba who perform in Plautdietsch.

Braun and Falk premiered That Mennonite Joke at a free screening at the Keystone Cinema in Steinbach on Feb. 6, 2016. The documentary is now available in Manitoba through MTS and will air Canada-wide on the Bravo channel next year.

Braun is excited to share the film with people and says its themes will resonate with Mennonites and non-Mennonites alike.

He recalls a conversation he had with his cinematographer, Charles Venzon, after filming one day. Venzon knew very little about Mennonite culture going into the film, and told Braun that working on the documentary made him want to talk to his grandmother about his Filipino heritage.

Braun was ecstatic. “That’s exactly what I want people to do—to connect with [their] past, no matter what that past is,” he says. “From life’s first breath until we die, it’s a part of who we are and we just need to embrace it.”

For Falk, working on the film has led to greater depth in his stand-up material about Mennonites. It’s also led to a greater appreciation for his heritage.

“In the beginning it was a punchline for me,” Falk says. “Now it’s something a whole lot more.”

He recalls visiting the Mennonite Heritage Village in Steinbach, Man., while filming and discovering for the first time the story of Dirk Willems, the martyred Anabaptist who escaped from prison only to turn back and rescue his pursuer who had fallen through thin ice.

How Willems and other early Anabaptists honoured God in the way they lived their lives inspired Falk. “Learning about that makes you so proud to be a part of this people that laid down their lives ahead of others,” he says.