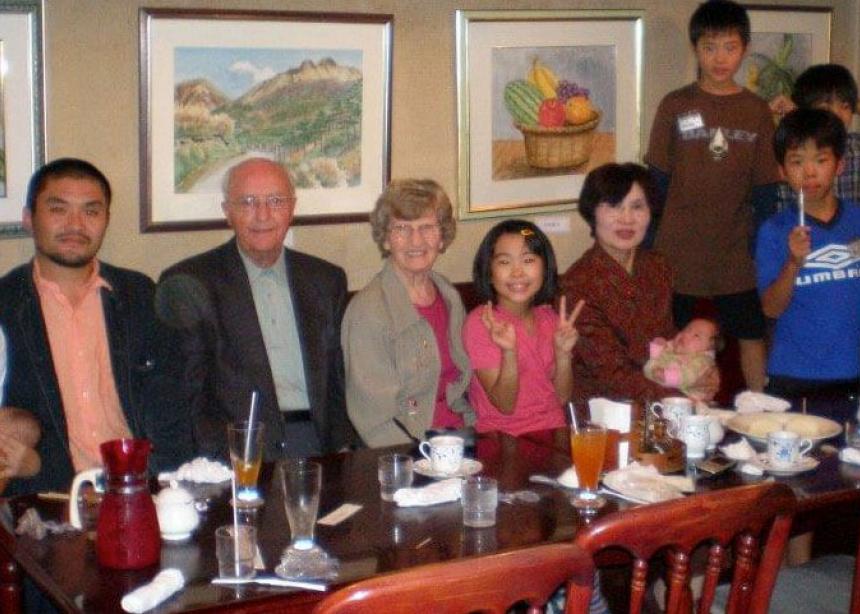 Missions is not a very popular word in some circles these days, but when Masaki Higashiguchi visited Emmanuel Mennonite Church in Abbotsford, B.C., on Oct. 30, 2016, it was a reminder that missionaries of the past have made an impact. Masaki is a high school teacher in Takachiho, Japan, who is taking a study leave in Canada. After spending a year in Prince Edward Island, he moved to North Vancouver in July, and he and his family plan to return to Japan in January.

Mary Derksen, who knew the Higashiguchi family from her years as a missionary in Japan, heard that he was in Vancouver and invited him to be at her church for a Missions Sunday worship service and potluck. The family could not come, but he found his way by bus from Vancouver and walked until he found the church. It was a happy meeting. Masaki was excited to meet people involved in environmental issues, especially Tim Larson, who is program director at Camp Squeah. He hopes to incorporate some of the methods used in Canadian high schools relating to the environment in his school in Japan.

Mary and the late Peter Derksen were missionaries in Japan for 45 years. In 1958, while they worked with an emerging young church in southern Japan, a young man named Seiko Higashiguchi began attending Peter’s English-language Bible classes. These classes were a big attraction for young people who wanted to learn English. Seiko accepted Christ as his Saviour, and, as a symbol of his new faith, planted a small evergreen tree by their front door. Later, Seiko was transferred to another town and the Derksens lost contact.

Several years later, in the 1970s, the friendship was renewed when the Derksens had a new assignment in a different Japanese city. They were happy to renew the friendship, but were sad that Seiko seemed to be denying his faith. He had married and had two children, and asked the Derksens to help him immigrate to Canada. He wanted his children to have more opportunities than they could have in Japan.

That was a difficult task; however, Peter’s sister in Vancouver found a job for Seiko. He visited the Derksens several times before he left, planning that his family would join him after he found work and a place to live.

In Vancouver, the Higashiguchis began attending a small Japanese church, where an evangelist held a series of meetings for Japanese Canadians. Seiko renewed his decision to follow the Lord, and his wife also became a Christian.

When the Derksens’ daughter Vangy went to Vancouver to study at the University of B.C., the Higashiguchi family almost adopted her. She spent many happy times with them, enjoying Japanese food and attending Japanese Bible studies. It was almost like being home in Japan.

After almost five years in Canada, Seiko’s father became ill. Wanting to do what was right, they decided to return to Japan to care for their ailing parents.

After the Derksens retired from their work in Japan in 1999, Seiko and his wife came to Canada for a visit. He had been diagnosed with cancer, but was still able to travel. The two families spent wonderful hours together, catching up. The Higashiguchis received joy and encouragement from the Japanese church in Vancouver.

When the Derksens visited Japan in 2002, visiting Seiko was a highlight. He was weaker, but still able to play his mouth organ. He died shortly after that visit.

Masaki was only 2 when the family returned to Japan, but he was raised in a Christian home and became a Christian. He and his wife were married in the Miyakonojo Mennonite Christian Church. While currently living in Vancouver, Masaki and his family attend the same Japanese church that his parents attended when they lived in that city.

Sitting around the table during his visit to Emmanuel Mennonite, Masaki eagerly listened to stories about his father. He talked about his family and proudly said, “My children speak better English than me.”

Mary Derksen was very happy to have her church meet Masaki. It reminded her of the many families that have been touched by the work of missionaries who were supported and prayed for by the broader church.

With files from Mary Derksen.

Thank you, Barb Draper, for the good job of my article re: Higashiguchi family. You gave me new hope for missions in our conference. Blessings.