Same-sex resolution sparks calls for both unity and separation 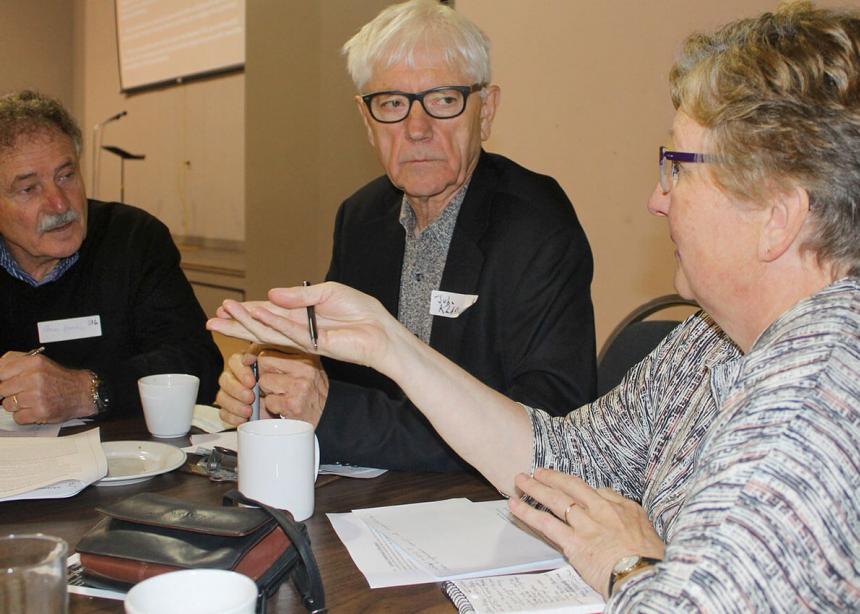 These questions were posed by Garry Janzen, executive minister of Mennonite Church British Columbia (MC B.C.), to a gathering of 200 billed as “Hearing each other with regard to the BFC [Being a Faithful Church] 7 decision in Saskatoon,” held at Emmanuel Mennonite Church in Abbotsford on Oct. 22, 2016. (See “Delegates vote to allow space for differences,” on the decision at Assembly 2016.)

In his introductory remarks, Janzen asked all to pray for wisdom, guidance and grace, to be respectful of one another, and to hear God’s wisdom as the group discussed a potentially divisive issue: the resolution passed at this past summer’s Mennonite Church Canada (MC Canada) assembly. That decision, passed by an 85 percent majority, created space for MC Canada congregations to differ from each other on the issue of committed same-sex relationships within the church, putting them at variance with the Confession of Faith in a Mennonite Perspective that affirms only one man/one woman marriage.

Participants were mixed randomly for prayer and discussion around tables, then they were each was given two minutes there to share their own feelings on the issue and how their congregation might be leaning, if known.

An open mic time followed, revealing a wide variety of opinions on what the BFC7 resolution would mean for MC B.C. congregations. Several people spoke in favour of upholding the traditional view of marriage, while others spoke in favour of wider inclusiveness, with many voices calling for compassion and understanding:

A group of 11 pastors then publicly presented a response to BFC7 on behalf of their congregations’ leadership: “We believe that with BFC7’s adoption, MC Canada has fundamentally changed our Confession of Faith and has adopted a new hermeneutic that we are opposed to, and is incompatible with our MC B.C. covenant [signed in June 2007].”

Their document states that the national adoption of BFC7 is a faulty interpretation of Scripture and that, in adopting it, MC Canada distanced itself from the common Confession of Faith and MC B.C.’s covenant. Therefore, the pastors propose that the area church maintain a unity separate from that of MC Canada.

Participants then brainstormed other options in moving forward:

Gerd Bartel of Peace Mennonite Church in Richmond, urged the body not to rush into a decision when he said: “[A proposal] coming to us at this time is too early in our process. If we can work together, there must be compromise in that. There are absolutely no easy answers.”

Another gathering is called for Jan. 21, 2017, to determine what proposal to bring to the area church annual general meeting in February.

See “Finding a way to be together,” a report on a previous pastors-only meeting about BFC7.