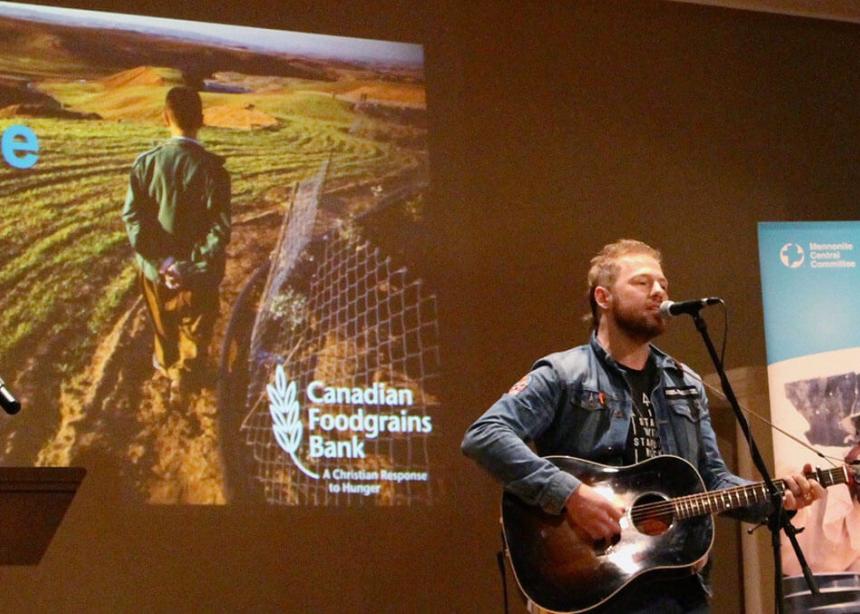 The soulful voice of Matt Epp serenaded a crowd at Foothills Mennonite Church in Calgary on Feb. 3, 2017. Epp partnered with Mennonite Central Committee (MCC) Alberta and Canadian Foodgrains Bank for a fundraising concert to launch the Grow Hope campaign.

Richard and Esther Goerzen will plant, nurture and harvest 100 acres of their land, with expenses covered by donors so that all proceeds can be donated to the Foodgrains Bank for its food-security initiatives. A $300 donation purchases the materials needed for seeding an acre. The wheat will be harvested and sold for roughly $500 an acre, and the donation is then matched by the federal government, up to three times.

Epp, who tours across Canada and Europe, expressed his appreciation for “MCC being present and getting their hands dirty.” His parents work for MCC, focussing on the Low German Mennonite population in southern Alberta.

The concert was inspired by Epp’s life and travels. He has a passion for a loving and just world. From his own background as a Mennonite migrant, he muses, “We own land but pay property taxes to a government that took from people who never thought they owned it in the first place.” With a keen awareness of Indigenous Peoples in Canada, and a commitment to the love needed in the world, he led the evening with a spirit of giving.

Betty Brown’s family was one of many who bought an acre. “MCC is important to me, as this is my opportunity to be involved in social justice and peace issues, something that Jesus constantly exemplified, and . . . is a very real way of sharing the gospel.” Brown’s grandson Zander helps on their family farm and enjoyed planting his own wheat during the fundraiser as part of the children’s activities. He said, “The concert was awesome, especially the harmonica.”

The event also included food from around the globe, fellowship and a Ten Thousand Villages display.