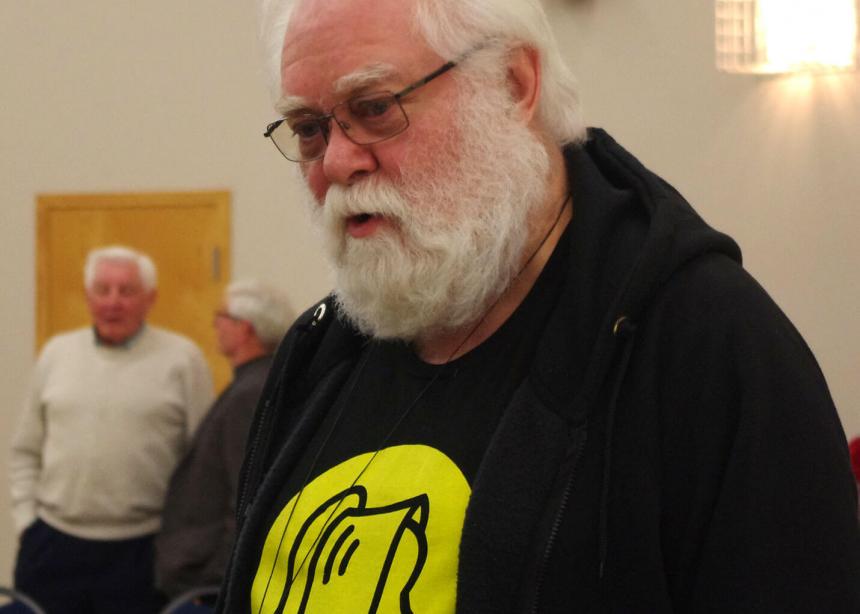 After stormy weather prevented many rural members from attending a Mennonite Church Manitoba meeting in Winnipeg on Jan.12 on how to implement the Being a Faithful Church (BFC) 7 resolution passed last summer in Saskatoon, Morden Mennonite Church hosted a second gathering late last month.

Even before any talking began, the physical format of the meeting set a very different tone from that of the previous gathering in Winnipeg: round tables well-suited to collaboration replaced the more-confining rows of pews.

Area church moderator Peter Rempel began by addressing the issue on everyone’s mind. Naming the sad turn of events that had derailed debate in Winnipeg—wherein one speaker interrupted another due to concern about hurtful remarks and induced the latter to leave the building (“Let him speak,” Jan. 30, page 18)—Rempel made the following introductory remarks:

“At our last meeting in Winnipeg I said it would be a sin for us to split over this issue, but today I would like to amend those remarks by saying that coercion in a matter of conscience is a greater sin than permitting division. We do not want to be coercive institutionally, procedurally or verbally—neither amongst ourselves, or on the board, or in MC Canada leadership. I regret to apologize that I was not able to restrain the coercive tone of some of the remarks that were made at our last meeting.”

He went on to acknowledge that the presence of each member in attendance in Morden testified to their heartfelt concern over the issue at hand and the people impacted by the area church’s conversations. He also clarified, verbally and in writing on two large charts at the front of the room, the guidelines for conversation that would define the evening’s discussion and any interventions on his part during the open mike:

He further clarified that the space for churches to continue in a more traditional understanding of, or approach to, this issue “is not under threat.”

The effectiveness of Rempel’s opening remarks, and perhaps the flurry of online debate that followed Winnipeg’s meeting, showed through in the open-mike session. Speakers from many varying perspectives expressed their concerns and hopes relating to the proposed course of action, with no disruption at all.

Del Epp of Glenlea Mennonite Church, hypothetically entertaining the idea that homosexuality may be sinful, asked rhe-torically, “Do we cast people out over other sins?”

Similarly, John Sawatzky of Morden Mennonite expressed worry that the church, which he described as a “hospital,” is trying to “clean [sinners] up” before allowing them in to receive care.

Erwin Warkentin, a member of Bethel Mennonite Church in Winnipeg, one of only a couple of member congregations that have named themselves openly “affirming,” explained that even having adopted this label as a congregation, between individual members “disagreements on biblical interpretation are common, but we are still one church. Space is crucial. We talked for a while about having a vote, but we decided that would be too divisive, so we had no vote. Instead, we made space for disagreement.”

One feeling was shared all but universally among those gathered, and that was eagerness for an ongoing church discussion that recognizes the genuine convictions of all participants.

Pleading for all members of the area church to focus on what unites, Diane Hildebrandt of Morden Mennonite reminded those gathered that “Mennonites are doers. As Mennonites, we think we are the peacemakers. But it is Jesus who is the peacemaker.” 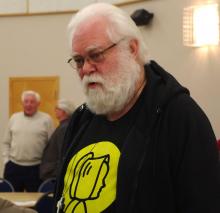